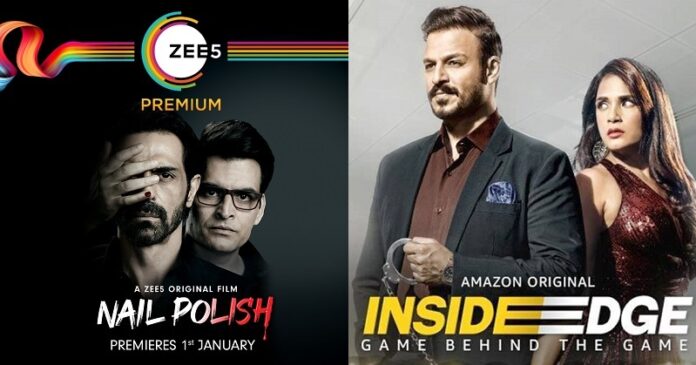 Many early digital programs in India were comedy-based. However, with shows like Sacred Games, Mirzapur, and many more, crime thrillers have emerged as the new favorite genre of the general audience and OTT platforms. Web shows from India are delivering heartbreaking murder mysteries with stories that will send shivers down your spine. So, if you’re a thriller fanatic like us, and you’re in desperate need of a binge-watch, we’ll make it easy for you.

Here’s a list of the top 30 thrillers based web series in Hindi that has leveled up the suspense:

The investigation of a girl from south Delhi who got sexually assaulted and murdered is the focus of the story. The investigation got led by DCP Vartika Chaturvedi. In September 2020, the Web Series won the Outstanding Drama Series category at the International Emmy Awards. Shefali Shah, joined by Rasika Dugal, Aakash Dahiya, Adil Hussain, Rajesh Tailang, and Denzil Smith in the performance.

Sidharth Sengupta conceptualized and co-wrote this Web Series. The film follows DSP Barun Ghosh (Dibyendu Bhattacharya) as he investigates the execution of a police officer in the Sunderbans. The story also touches on two social groups: the powerful and wealthy, and the oppressed poor. Undekhi is a ten-episode web series. Surya Sharma, Harsh Chaya, Ayn Zoya, and Ankur Rathee co-star in the show with Dibyendu.

Rivanah Banerjee, popularly known as Mini in the show, got hounded by an unknown mute, faceless stalker, played by Anuja Joshi. After two successful seasons, the Hello Mini crew returned for the third season, which began in April 2021. It is one of the most popular web series in India.

Inspector Sartaj Singh, Ganesh Gaitonde, and Guruji are characters from the program Sacred Games, in which Gaitonde reappears after a 16-year absence. Then, he summons the righteous inspector Sartaj Singh to save his beloved Mumbai. Reviewers and audiences alike have praised the casting and narrative of Sacred Games. The novel Sacred Games by Vikram Chandra was the winner of the Commonwealth Writers Prize in 1996.

In the second season of the show, Manoj Bajpayee is up against two enemies: ISIS terrorist Sajid Ghani and Rajalakshmi Sekharan nicknamed Raji, the lady of the rebel group from the south. This season has received more positive reviews from fans and critics than the first. The IMDb rating for the first season was 8.8/10, and this season is 9.2/10. (One of the highest).

Maharani delves into the life of Huma Qureshi, who plays Rani Bharti in the TV series. The show delves into the difficulties she endured on her road to becoming the chief minister of Bihar. Huma Qureshi, Sohum Shah, Amit Sial, Pramod Pathak, Kani Kusruti, Inaamulhaq, Vineet Kumar, Tanu VIdhyarthi, and Harish Khanna star in the show.

Virkar is a murder mystery based on the book Anti-Social Network by author Piyush Jha. It’s the third installment in his Inspector Virkar series. The character of Inspector Virkar got played by Pratik Babbar. Simran Mundi, Ruhi Singh, Ashish Vidhyarthi, Shiv Pandit, Gopal Dutt, and Asif Basra also appear in the show.

The plot follows the mission of India’s R&AW (Research & Analysis Wing) 5 agents, who got tasked with tracking down a terrorist responsible for a bombing in India. The expedition, led by Himmat Singh (Kay Kay Menon) and his comrades Fariiq Ali (Karan Tacker), Abbas Sheikh (Vinay Pathak), Bala (Vipul Gupta), and Ruhani Sayed (Meher Vij). The show got created, co-written, and directed by Neeraj Pandey.

In this murder mystery, Tamannaah plays Anuradha Ganeshan, an ethical hacker who works on a contract for the Crime Records Bureau. Her aim is to track down the primary antagonist, Kulandhai Yesu (Pasupathy M.). Malarmannan got played by Vivek Prasanna, who also plays Tamannaah’s best friend. Ganesan, Anuradha’s (Tamannaah) father, is a crime novelist played by G.M. Kumar. There are a total of seven episodes. The show is originally in Tamil, however, it got dubbed in Telugu and Hindi.

In Nail Polish, Arjun Rampal and Manav Kaul feature in a crime thriller in which they both shine. The plot centers around an activist accused of rapping and murdering two young children. This is a novel notion. The writing in the show is outstanding. The show got directed and written by Bugs Bhargava Krishna, and the cinematography got filmed by Deep Metkar.

The Married Woman is a film about two young women who wish to live their lives freely. In 1992, the year of the infamous Babri demolition, the story takes place. Monica Dogra plays Peeplika, an opinionated woman who wishes to break free from society’s rules, and Ridhi Dogra plays Astha, a homemaker.

Broken But Beautiful, the third season, premiered on May 29, 2021, following two successful seasons in a row. Sidharth Shukla plays a struggling theatrical writer and director in the film. Rumi Desai got played by Sonia Rathee, who hails from a rich family. The first and second seasons, respectively, got released in 2018 and 2019. In total, there are three seasons, each with 31 episodes.

Hello Mini 3 is the third installment in the franchise. The audience is always captivated by this Romantic Suspense thriller when it got released on film. Anuja Joshi has a strong fan base thanks to her stunning looks and exceptional acting abilities. The show’s essence got provided by Anand Sivakumaran and Akshay Vishwanath’s screenplay and Faruk Kabir’s direction. Anuja plays Rivanah, a 22-year-old female character.

Amrita Singh (Zoya Hussain), a female IPS officer, investigates the 1984 anti-Sikh riots in Bokaro, which got linked to her father, who was also a main suspect in the disturbances. The drama got based on the novel Chaurasi by Satya Vyas. In the TV Series, the Director successfully depicted two timelines, 1984 and 2016, in a compelling Web Series with a fantastic storyline. Manjeet Kaur Chhabra alias Manu got played by Wamiqa Gabbi. Disney+Hotstar will release the show internationally on June 24, 2021.

LSD (Love Scandals & Doctors) is a show about five medical students who are interns at one of the greatest teaching hospitals, produced by Ekta Kapoor’s Balaji Telefilms. They find the horrible truth about a crime scene later in the show. The series consists of 15 episodes.

The Indian Premier League and the politics that surround it are the focus of the show. The series reveals that cricket is about more than just the game played in front of a crowd; it’s also about sex, money, betting, and power. The series stars Richa Chada, Siddhant Chaturvedi, Tanuj Virwani, Vivek Oberoi, and Angad Bedi.

Mirzapur is a film about drugs, guns, and anarchy that premiered on Amazon Prime. It focuses on the mafia dons’ control and domination and their competition and the criminality in Uttar Pradesh. This Indian Web Series stars Pankaj Tripathi, Ali Fazal, Vikrant Massey, Shweta Tripathi, Shriya Pilgaonkar, and Rasika Duggal and was largely shot in Mirzapur and other parts of Uttar Pradesh. This is a once-in-a-lifetime show.

A cab driver and his passenger had an unusual story to tell. Based on a British serial, the show is about apprehending ‘criminals’ who may or may not have committed the crime. Based on the hype surrounding the Indian adaptation, Criminal Justice will have many more seasons. On the other hand, the first is terrifyingly good in and of itself. The show revolves around Vikrant’s character Aditya, who got accused of killing his passenger after having a one-night stand while on narcotics.

Raikar Case, an Indian Thriller Drama Crime Web Series, got released by Voot Select. The death of a teenager from the “Raikar’s,” a powerful family, is the focus of the internet serial. Dark family secrets emerge from nowhere as the plot unfolds, and the show grows more gripping by the end.

When four Indian spies are captured and held captive in Balochistan an excommunicated RAW agent, Kabir Anand takes on a covert mission but things become difficult when he has to face his past. Emraan Hashmi has done justice to his role as Kabir Anand.

IMDb: 6.9
Based on a book by: Bilal Siddiqi
Lead: Emraan Hashmi, Sobhita Dhulipala, and Vineet Kumar Singh
Watch On: Netflix

A Hindi crime thriller where the family of a doctor is held hostages and the doctor has to get involved in the assassination of a well-known politician in order to save them. The plot has a lot of twists and turns and is thrilling enough to binge-watch.

After a puzzling murder, two police officers of a hill station try to solve the mystery with different opinions. Things turn grave when personal agendas, politics and a myth surfaces amidst the chaos. Look out for the extraordinary performance by Raveena Tandon.

This is a horror-thriller Hindi web series based on a monster from the folklores of Arabs. Radhika Apte plays the lead Nida Rahim. The series got a lot of positive reviews from critics. You can watch this horror thriller series on Netflix which has one season.

Betaal is our own zombie series in Hindi where an old curse is released and the land is under attack by old British soldier zombies. This happens when some people are hired to make a highway by displacing the native tribes of the place.

This Hindi thriller’s plot goes by a few school dropouts in a remote village of Jharkhand, Jamtara. The school dropouts along with cousins, Rocky, and Sunny run a phishing scam. Things go wrong when the scam is revealed in the news.

Kaafir is a 2019 Indian web television series directed by Sonam Nair. The series follows the story of a woman from Pakistan-administered Kashmir named Kainaaz Akhtar, who is held in the Indian side of L.O.C. for being a militant suspect.

Some ghost hunters’ imagination is stirred when an old book is found in a haunted house. When a new family moves to the town, Bardez, Goa, some secrets are unraveled.