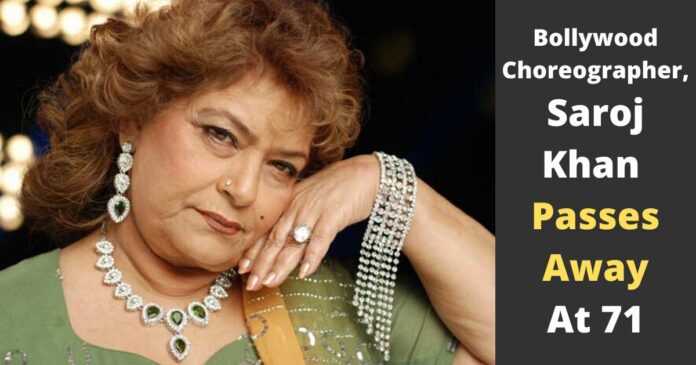 Again a black morning for Bollywood and the Nation as a whole. Legendary Bollywood Choreographer, Saroj Khan passes away at the age of 71 due to a cardiac arrest in Guru Nanak Hospital at Bandra, Mumbai. She was admitted to the hospital on June 17 after she complained of difficulty in breathing.

Saroj Ji took her last breath at around 1.52 AM on Friday, July 3 2020. After getting admitted to Guru Nanak Hospital, she underwent a test for Corona. But the test results were negative. Notably, she had severe diabetes and some other illness too. But as per reports, she died due to cardiac arrest. After she was admitted to the hospital, Saroj Khan’s daughter informed the media that she was not suffering from Corona as the tests were negative, but has a cold which was the reason for her breathing issues.

Saroj Khan’s demise is tragic news and Bollywood will miss her a lot. Her efforts and dance moves are eternal and will stay with us forever. Following her death, she is taken to the Ahle Sunnat Cemetery in Malad where her body will be buried, allowing her to take her eternal sleep.

Saroj Khan’s family includes her husband, B. Sohanlal, son Hamid Khan and daughters Sukanya Khan and Hina Khan. They too, are broken but have accepted the fact to stand strong in these hard times. We extend them our heartiest condolences on the loss of the beautiful soul that have raised them to be what they are.

Saroj Khan had a career of more than 40 years and choreographed more than 2000 songs. Her first movie as an independent choreographer was Geeta Mera Naam in 1974. But, she started her career much before that as a background dancer, merely at the age of three. Some of her finest choreography for which she will be remen=mbered always, include Ek Do Teen from Tezaab (1988), Hawa Hawai from Mr India (1987), Dola Re Dola from Devdas (2002) and Dhak Dhak Karne Laga from Beta (1992).

The last song she choreographed was Tabaah Ho Gae from Karan Johar’s production in Kalank (2019) in which Madhuri Dixit was seen executing her dance moves on screen.

RIP Saroj Khan! You will be remembered always! You were the best, the Dancing Queen of Bollywood!