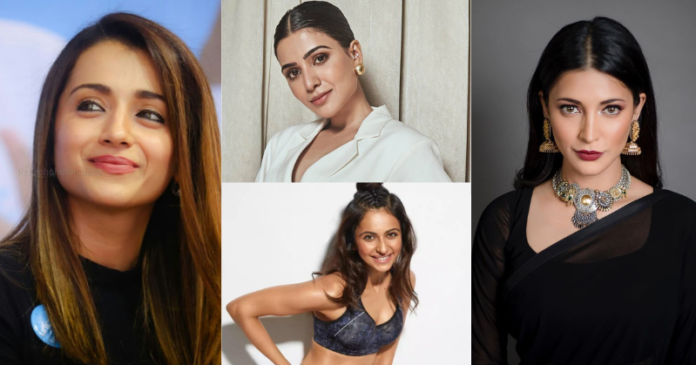 South Indian heroines are the divas of Tollywood. They are as beautiful and talented as any Bollywood or Hollywood actress. They are also very popular for their flawless looks and acting skills. The aura of the South Indian actresses is amazing, some of them are highly educated, elegant, and hot.

But have you ever wondered how much these talented beauties charge for their work? Who is the Highest Paid South Indian Actress in South India movies of this year? Any guesses? Read this to get your answers about the top 10 highest paid South Indian actresses in India 2022.

Here we have listed the top 10 highest paid South Indian actresses in India 2022:

The highest paid South Indian Actress of the year is none other than Anushka Shetty. She has worked in more than 30 Telegu and Tamil films in the South cinema industry after making her debut in 2005. The Tolly beauty charges Rs 4 crore for each film. But after her acclaimed performances in the blockbusters Bahubali 2 and Rudramadevi, Anushka may charge even more. She is also considered the most beautiful South Indian actress and she is also one of the highest paid actress in India.

The real name of this second highest paid actress in South India is Diana Mariam Kuria who is popularly known as Nayanthara. The actress earns Rs 2.5 to 3 crore per film. She has acted in several Tami, Kannada, Malayalam, and Telegu films. She is considered one of the hottest actresses in the South film industry. Her acting career in Tamil Film started with her debut film “Ayya” in 2005 for which she got some accolades and awards. Nayanthara won 5 Filmfare Awards for her stunning performance.

Tamannaah With the status of the Hottest actress in Tollywood and Bollywood Tamannaah Bhatia is the third highest paid South Indian actress 2022. After her blockbuster film Bahubali: The Beginning, where she played the character Avantika, Bhatia became more popular in the film industry. Her charge for one film is Rs 2 to 3 crore. She made her debut with the Tamil film KD which was released in the year 2006. She makes it to the list of the top 10 highest paid actresses of South Indian film industries due to her acting, and dancing skills.

Samantha Ruth Prabhu is known to charge INR 2 to 2.5 crores for each film. She has established her career in the Tamil and Telugu South film industry. She has a never-ending list of hit movies under her name. She gained a lot of popularity from the films Theri, Aaa, etc. After featuring in back-to-back hits, she is one of the highest paid South Indian actresses. Her fans are crazy for her, she was recently featured in the latest song, ‘Oa Antava’ from Pushpa.

One of the most beautiful and brilliant South Indian heroines, Kajal Aggarwal makes a whopping Rs 2 crore for each film. She has also appeared in Bollywood movies besides Tamil, and Telugu films. With the Bollywood film Kyun Ki! Kajal made her mark in the cinema industry. She acted in many movies like Janatha Garage, Vidhayak, Adirindi, Veevakam, Kavalai Vendam, Khiladi No 150, Nene Raju Nene Mantri, etc. The game-changing film for Kajal was Magadheera.

Shruti Haasan is not only an actress but also a playback singer and a musician. Shruti acted in several Telugu, Tamil, and Hindi movies and earns around INR 1.5 Crore per film. The talented and beautiful daughter of South Indian superstar Kamal Haasan is one highly paid South Indian Actress. highly paid south Indian actress. For her awesome songs like “Kannazhaga Kaalazhaga” and “Yendi Yendi” she got nominated for Filmfare Award for ‘Best Female Playback Singer – Tamil’.

The attractive and fit actress Rakul Preet Singh has fans in both the Bollywood and Tollywood film industries. The actress charges Rs 1 Crore per film. She is very interactive with her fans on social media platforms. Currently appointed by Telangana State Government, she is the brand ambassador for Beti Bachao, Beti Padhao program.

The 8th Highest Paid Actress in South Indian Film Industry who charges Rs 1 Crore for each film is none other than Shriya Saran. With the Telugu film Ishtam, Shriya made her film debut in the year 2001. Shriya was the brand ambassador of Celebrity Cricket League and was featured in the most expensive movie of South Cinema, Shivaji of Rajnikant which became the highest grossing Tamil Movie.

Hansika Motwani’s fee per film is INR 80 lakhs. She was first seen as a child actor in the popular TV serial Shaka Laka Boom Boom. She also acted as a child artist Hansika in Koi Mil Gaya. She gets the highest remuneration in Tollywood heroines after successfully making a mark in the South Indian film industry by honing her acting skills and delivering awesome performances in several Telegu, and Tamil movies.

So, on the list of Top 10 Highest Paid South Indian Actresses In India 2022 (updated) we have

Also Read: List Of Upcoming New South Indian Movies That You Must Watch In 2022