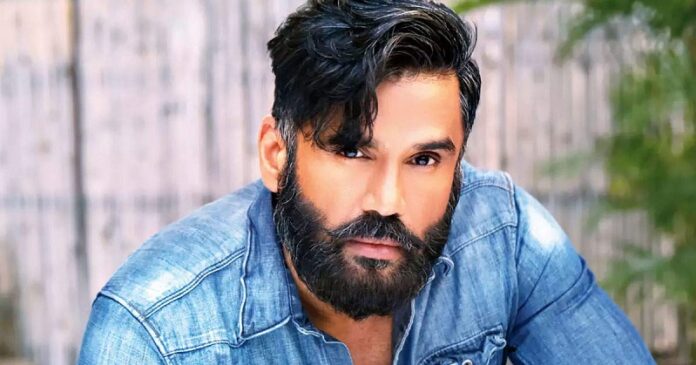 A person wrongly called out the veteran actor Suniel Shetty for promoting a tobacco brand. The person intended to slam the actors for advertising the tobacco brand but ended up committing a mistake. Recently, the Bollywood stars Akshay Kumar, Ajay Devgn, and Shah Rukh Khan were called out and faced backlash by people for appearing in a tobacco advertisement for which the actor Akshay Kumar also apologized and promised not to promote such products anymore.

Now this man made a huge mistake he wrongly tagged the wrong man, instead of Ajay Devgn he tagged Suniel Shetty on Twitter. The user called the trio ‘Gutka Kings of India’. When Suniel Shetty came to know about it he responded hilariously.

The person retweeted a tweet featuring the hoarding of a tobacco brand ad featuring Akshay Kumar, Ajay Devgn, and Shah Rukh Khan, and tagged Suniel by mistake. The caption in the picture was,

“Itne ad dekh liye iss Highway pe ki ab Gutkha khaane ka mann kar raha hai (I have seen so many ads on this highway that I feel like having some tobacco).”

To his tweet Suneil Shetty responded with a hilarious reply:

The person not only apologized for his mistake but also claimed to be his fan.

Hello @SunielVShetty Sorry it was just mistagged and i didn’t mean to hurt you bhai, lot of love.
It should be (@ajaydevgn)
As I am your fan you name ups always first in tag 😝

Fans of the actor applauded him for his response and respected him for not promoting a tobacco brand. On Twitter a fan wrote “Ye aam aur Shyam mein confuse ho gaya. Aur babu bhaiya wala kaam kar gaya (this guy got confused and behaved like Babu Bhaiya of Hera Pheri).”

Check out how the fans reacted to Suneil’s response:

Suniel Shetty is not just a name
It’s a brand of purity humanity genuinity generosity etc. He is DHADKAN of the country,
Don’t b cheaper doing like this @Moni_krishnaa u must know we are fans of Actionking-heman-Balwan etc. 💪👊 ????

Person watching all this 😂 pic.twitter.com/B5eEYubhyb

Earlier when Akshay faced the uproar for appearing in the ad, he wrote,

“While I have not and will not endorse tobacco, I respect the outpouring of your feelings in light of my association with Vimal Elaichi. With all humility, I step back. I have decided to contribute the entire endorsement fee towards a worthy cause. The brand might continue airing the ads till the legal duration of the contract that is binding upon me, but I promise to be extremely mindful in making my future choices. In return I shall forever continue to ask for your love and wishes,”

The actor last made an appearance in the Telugu film Ghani.