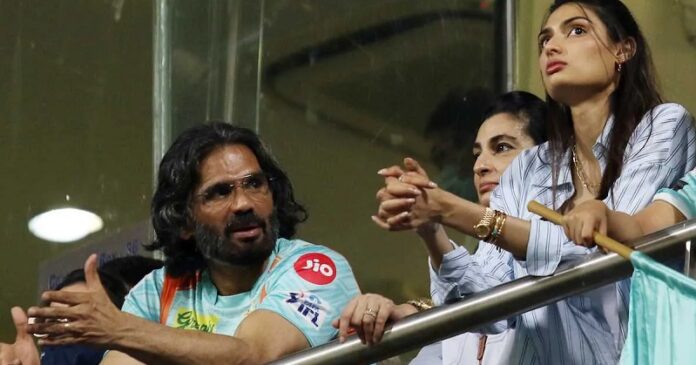 The skipper of the Lucknow Super Giants (LSG), KL Rahul was attacked by the Rajasthan Royals (RR) pacer Trent Boult which led to an unwanted record by the premier batter in an Indian Premier League (IPL) 2022 match. When Lucknow squared off against Rajasthan Royals in match No.20 of the IPL 2022, the LSG skipper Rahul was handed a golden duck by the New Zealand pacer. Interestingly, Bollywood stars Suniel Shetty and Athiya Shetty(Rahul’s rumored girlfriend) were present at the Wankhede Stadium to support Rahul-led LSG in the ongoing edition of the premier league.

Rahul did manage to make amends in the next match at the world’s richest T20 tournament (IPL 2022) and smashed a century against the Mumbai Indians (MI)(five-time IPL champions) on match no. 26 of the Indian Premier League. The veteran actor Suniel Shetty praised Rahul on social media as he turned out to be the captain’s knock and the star batter.

Meanwhile, a troll opted to take a dig at the Bollywood star’s appreciation post for Rahul. Since the fan went all the way to come up with a distasteful comment, actor Suniel responded with a befitting reply to hit back at the troll. In the reply to the comment, Sunil Shetty wrote, “beta apne ghar par dhyan dho!!.”

Suniel, one of the most popular actors in tinsel town, shared a special post for Rahul after the star batter recorded a memorable century in his 100th IPL match. Rahul, who is dating Bollywood actress Athiya who also happens to be Suniel Shetty’s daughter, has come back to his form in the 15th edition of the league. Among the new entrants of the Lucknow Super Giants, Rahul became the first centurion on Sunday.

Suniel Shetty shared a photo of KL Rahul taken after he scored the century for Lucknow Super Giants and lauded KL Rahul. The words on the photo read, “100 in his 1ooth. Work hard in silence, let your success be your noise.”

The Lucknow-based franchise’s outstanding batter played a match-winning knock of 103* off just 60 balls. Lucknow Super Giants managed to score 199-4 in 20 overs with the help of Rahul’s unbeaten ton. Meanwhile, the five-time champions, Rohit Sharma’s Mumbai Indians (MI) lost the match by 18 runs as they only managed to score 181-9 in 20 overs.

Recently, actor Athiya Shetty wished her boyfriend, KL Rahul, on his 3Oth birthday. Athiya posted several monochrome photos with her beau on Instagram. Athiya captioned one of her posts, “Anywhere with you, happy birthday (smiling face with three hearts emoji).”

KL Rahul reacted to the post by commenting, “Love you (black heart emoji).”