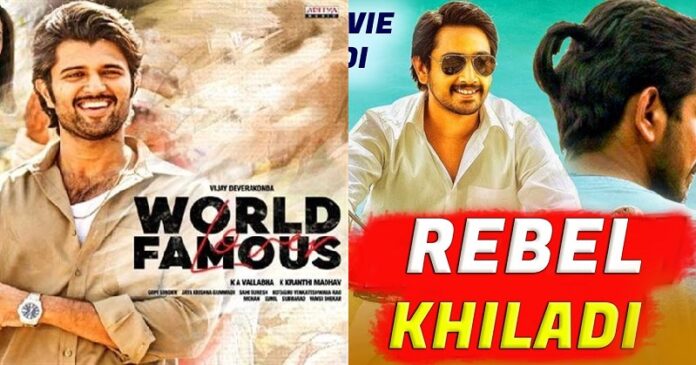 Do you like watching South Indian films but find it hard to get them in the Hindi dubbed version? If yes, then you are surely at the right place. You can get an idea of the latest best South Indian romantic movies in this article that are dubbed in Hindi for you to enjoy. All these movies are super hit as well as dubbed in Hindi. Interestingly, you can easily watch all these movies on Youtube in the Hindi language.

So, if you are bored of watching the same old movies? Check out the list of top South Indian romantic movies that are dubbed in Hindi now.

This is the best romantic South Indian film that stars Vijay Deverakonda in the lead role. The movie starts with the character of Vijay Gavindam. In a temple, he falls in love with a beautiful girl, named Geeta. The entire is based on how Vijay expresses his love for Geeta. Director Parasuram beautifully describes a love story in this film.

If you love Geeta Govindam, then you definitely love this another romantic movie by Vijay Deverakonda. The movie starts with Bobby who confesses his love for Lilly. Then in a flashback mode, the movie illustrates Bobby and Lilly’s love story. It’s the most popular South Indian romantic movie in the Hindi language.

Tholi Prema means first love. With the name only, you will get some idea about the movie itself. The movie starts with Aditya searching for his love. After that, the movie continues in flashback mode. It shows us the beautiful and romantic love story of Aditya and Barsha.

If you like Sai Pallavi, then “Fidaa” would be the best romantic movie for you to watch today. It is a beautiful love story of Varun and Sai Pallavi where Varun (Varun Tej) falls in love with Bhanumathi (Sai Pallavi) during his brother’s wedding. Later, with various twists and turns, they come together and lived happily ever after.

This romantic South Indian movie dubbed in Hindi stars Ram Pothineni as Hari and Keerthy Suresh as Shailu. The movie starts with a flashback mode where Hari was thinking about his love story on a beach. The whole movie shows us an amazing love story of the couple Shailu and Hari.

Directed by:  A. Karunakaran

Tej I Love You (Supreme Khiladi 2) describes the beautiful love story of Tej and Nandini. It is a popular romantic South Indian movie where you can see Tej is a singer in the crazy boys’ band. However, he falls in love with Nandini at once glance. Director A. Karunakaran beautifully describes the love story between couples.

If you love to watch Nithiin and Megha Akash’s movie, then you can go with this movie. The movie starts with a cute love story of Mohan (Nithiin) and Megha (Megha Akash). This movie justifies the main concept of the film which is romance.

This romantic movie stars Anupama Parameswaran as Anu and Ram Pothineni as Sanju. You can find the beautiful love story of Sanju and Anu in this movie and how they convince their parents about their love story. This is undoubtedly one of the best romantic South Indian movies that are dubbed in Hindi.

One of the best South Indian romantic movies shows us a cute love story of Keerthi (Keerthy Suresh) and Babu (Nani). Maybe you will see your favorite actor or actress in this movie because you will see Nani as Babu and Keerthi Suresh as Keerthi in the lead roles. It is a must-watch movie for romantic movie lovers.

The movie “Uppena” shows us a love story of a fisherman who falls in love with a rich girl. This movie describes what type of difficulties they face after falling in love with each other. This romantic movie stars Krithi Shetty in the role of a rich girl and Panja Vaishnav Tej in the role of fisherman. It shows a new love story with new characters.

“Chalo” is the best Hindi dubbed South Indian romantic movie that stars Naga Shourya as Hari and Rashmika Mandanna as L. Karthika. Hari falls in love with Karthika in college and the movie follows with how Hari expresses his love for Karthika. You can watch this very interesting movie in Hindi on Youtube.

You can see Anupama Parameswaran as Subbalakshmi, Rukshar Dhillon as Riya, and Nani as Krishna & Arjun Jayaprakash (Dual role) in this movie. In this movie, Arjun loves Subbalakshmi and Krishna falls in love with Riya. The romantic twists and turns in this movie make it one of the best romantic South Indian movies that you can watch in Hindi.

The movie “RX 100” is an intimate love story that stars Payal Rajput as Indu and Kartikeya Gummakonda as Shiva in the lead roles. The story is based on the true-life of Shiva where he falls in love with Indu. Later, they start an intimate relationship with each other. This is a must-watch romantic South Indian movie.

Director Annish Krishna shows us the beautiful love story of Charita (Riddhi Kumar) and Raj (Raj Tarun) in this film. Charita is a responsible nurse and Raj falls in love with Charita in a hospital. This movie shows a cute and romantic love story between the couple.

The story revolves around Anand and Anusuya. Anusuya is the daughter of a rich businessman. They have to fight for their love due to their economic differences and family issues. The dubbed version of this south Indian love story was a huge hit.

The story revolves around Bindu and Nani. Nani is killed by Sudeep who is also in love with Bindu. Nani is born as a fly after his death to seek revenge. Nani and Bindu both join hands and fight for their revenge against Sudeep.

A failed cricketer, things change when Poorna gets married to his neighbor after being heartbroken by his ex. The lead actors are Samantha Ruth Prabhu, Naga Chaitanya Akkineni. Watch this movie for the sizzling chemistry between the lead actors.

The leads Sathyam and Chaitra decide to lie to each other but fall for each other gradually. Meanwhile, Sathyam is hired to catch a criminal Padmanabham. This movie is full of twists and turns and has some of the best action scenes.

A guy who does not believe in forever love breaks up with his current girlfriend. He had a bitter experience in a relationship because of his ex. Will he ever get back in a relationship? Watch this amazing movie to know more.

Varsha, an introvert falls in love with Aditya, an extrovert. Varsha is unable to share her feelings but they eventually meet after years. Look out for some amazing performances by the lead actors.

In the love story of an overweight chef, and his colleague Tara, things take a different turn when a woman named Maya makes an entry into their lives. The movie is attention-grabbing and entertaining. You should definitely watch this one.

It is a love story of Hari and Shailu. Hari falls for Shailu after searching for true love and getting to know that she was his childhood crush.

In the South love story movie list, “Chandi Veeran” tops the list. It is quite popular with the name of “Vilayati Hero” among the Hindi audience. This movie is an action-based romantic movie where a young man tries to stop a village feud. Featuring Atharvaa Murali and Anandhi in the lead roles, this is a must-watch movie.

“Kodiyil Oruvan” is yet another action-based romantic film that features Vijay Antony and Aathmika in the lead roles. In the movie, you can watch how a certain situation pushes a common man to oppose an influential guy in his area. You must this romantic movie a try that comes under the South love story movie list.

South Indian movies are always packed with action and “Siruthai” is among them. However, this movie is also famous for its romantic angle in the film. Featuring Karthi and Tamannaah Bhatia in the lead roles, it comes under one of the most-watched South Indian romantic movies lists.

“Vaaliba Raja” is a romantic comedy movie that is laced with family sentiments. If you don’t know, Santhanam is playing the role of a psychiatrist in the film. You must watch this South love story movie if you like to watch romcom movies.

Featuring Teju Ashwini, Prudhviraj, and Motta Rajendran in the lead roles, “Paris Jeyaraj” is a romantic drama movie. This movie witness how a Tamil folk singer’s love life takes cruel twists of fate because of his secret extramarital relations and his lawyer father. It is undoubtedly a must-watch South love story movie.

“Thirupaachi” is a romantic movie that is filled with astounding action sequences. Featuring Joseph Vijay, Trisha Krishnan, and Kota Srinivasa Rao in the lead roles, this movie comes under one of the best romantic South Indian movies lists.

“Iruttu Araiyil Murattu Kuthu” is a romantic horror movie where a sexually-starved spirit traps two couples in a bungalow. And, the spirit wants one of the two men to get intimate with her. Even though it is a horror movie, you must watch it if you are looking for a different kind of romance.