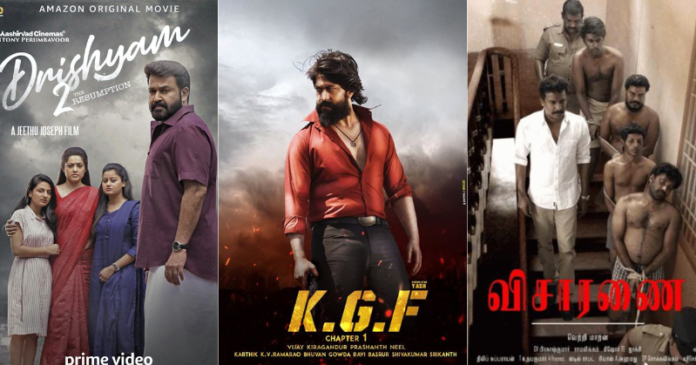 But searching for the best South Indian movie to watch becomes difficult when you have limited time to chill and relax. We are here to save your precious time and to make it easier for you to find the best South movies based on their IMDb ratings.

Here we have listed the top 10 highest rated Hindi dubbed South Indian movies on IMDb to watch in 2022.

This analogy film revolves around four love stories traversing different religions, ages, and ethnicity in a small town. The stories showcase sweet teenage romance to a middle-aged man’s office romance. The stories have been depicted in a creative manner, this cinematic excellency will leave you craving for more. The movie has been directed very professionally which makes it one of the top 10 South Indian movies IMDb has rated very highly. Watch this movie to find out how each story unfolds. It is one of the best south Indian movies dubbed in Hindi on Netflix.

The next movie that makes it to the list of the top 10 South Indian movies is an emotional drama. The story revolves around a child with cerebral palsy who has been abandoned by her mother and is being raised by her single father. This south movie represents the struggles the father and the child go through due to baseless societal norms. This tear-jerker brings to light several hard truths about society and is a must-watch best-rated South Indian movie.

Soorarai Pottru is about the journey of a young man from a remote village, Maara of how he would overcome the obstacles to achieve his big aspirations and dreams of launching his own airline services. While watching this movie you will feel inspired by his journey. Will he make it? You have to watch this one which deserves a place in the top 10 south movie list.

The story revolves around two star-crossed lovers belonging to different castes, the girl Jothi hails from an upper caste, and the boy, Pariyan from a lower caste. The couple has to face a lot of trouble due to the class difference between the two families. Do they end up together? You must watch this movie for its thrilling and emotional plot. This South Indian movie ranks among the top 10 IMDb movies.

Visaaranai is one of the best South Indian movies in the crime/thriller genre. The movie brings forth the hard-hitting truth of the prevalent political corruption in society. The story revolves around the plight of some labourers who are falsely accused of theft. This movie showcases the abuse of power which makes it difficult for the innocent to come out clean. This brilliant masterpiece is one of the top movies South film industry has ever provided. It is also one of the best South Indian movies dubbed in Hindi on Youtube.

This family drama revolves around the life of four brothers Bonny, Saji, Bobby, and Franky who belong to a small village of Kumbalangi. The brothers don’t get along with each other and they don’t have a good reputation in their village. The movie showcases the strength of a family which works in the favour of the brothers when they work together as a unit leaving their differences behind. This South Indian movie is a must-watch family drama. It ranks as the best movie on IMDb.

Grab your bucket of popcorn as Drishyam 2 is as entertaining and thrilling as the Drishyam. The movie follows the story of George Kutty’s family having to face an ongoing investigation that may threaten and change the course of their lives. One of the best IMDb rated movies Drishyam 2 has a gripping plot and great action sequences. Listed among the best South Indian movies IMDb has rated highly, this movie is a must-watch.

Based on the life of a South cinema actress Savitri Ganesan, the movie represents the dark side of the industry that only a few people are aware of. We only get to see the glamourous, happy, and rich sides of the actor and actresses. The movie showcases the ugly truth due to which the actress gets depressed and alcoholic when trying to smile in front of the camera becomes tough while facing life’s troubles and problems.

Aruvi is one of the best South Indian movies dubbed in Hindi. This black comedy film makes it to the list of the highest rated South Indian movies on IMDb. The story revolves around a girl who belongs to a middle-class family. When she finds it difficult to cope with her family she is thrown out by her family members for the reason that she brought shame to the family. The journey of the girl’s struggle to survive on her own is definitely worth watching.

Where to watch: Sony liv

The quest of a young man, Rocky who gets entangled with a notorious gold mafia in Mumbai while seeking power and wealth as he promised both to his dying mother. The movie has a gripping plot of power struggle and destiny. Listed among the top 10 South Indian movies, KGF Chapter 1 is a must-watch. The sequel of the movie, KGF Chapter 2  released in 2022. It is still running in theatres and also is one of the highest rated South Indian movies so far.