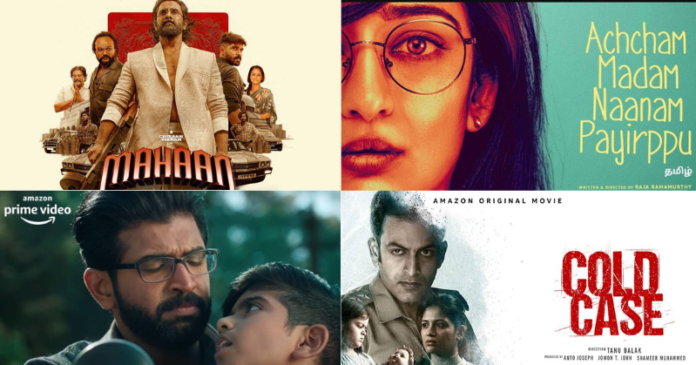 Here is a list of the top 10 south Indian movies on Amazon Prime in 2022 dubbed in Hindi,

Radhe Shyam is a period romance film about Vikramaditya (Prabhas), who can prophesy the future. He learns that Prerana (Pooja Hegde) is about to die, but he falls in love with her anyhow. It is a south movie on amazon prime. The film depicts how far Vikramaditya will go to save his lady love. After all, is said and done, the mood of the picture may be gauged by a single action sequence shot at night that shows Prabhas escaping a ship trapped in a Tsunami. The details will blow your mind, but it’s stretched so thin that you’ll lose interest eventually, and that’s Radhe Shyam for you. It makes it to the list of the new south indian movies 2022 list.

With the use of creative ideas, Pushpa Raj (Allu Arjun), a coolie, offers to smuggle red sanders, a rare wood that only grows in Andhra Pradesh. Pushpa rises to the top of the red sanders smuggling network swiftly. A cruel police officer, Bhanwar Singh Shekhawat (Fahadh Faasil) takes over as Superintendent during Pushpa’s prime and mocks Pushpa’s ancestry. Pushpa is one of the top 10 south Indian movie to be dubbed in Hindi in 2022.

FIR is a thriller based on the life of Irfan Ahmed, a young man. The story follows Irfan, an innocent man who is caught up in mysterious circumstances that change his life and the lives of others around him. The film also exposes the series of events that shatter Irfan’s life, as well as the media’s haste to paint him as the embodiment of evil. FIR is a thriller set against the backdrop of terrorism that aims to demonstrate how incorrect it is to hold an entire community responsible for the awful atrocities committed by a few members of that same community. Watch the trailers of the best south Indian movies on Youtube.

‘Mahaan’ recounts the stormy path of a middle-aged plain man who subsequently becomes a proud billionaire, followed by a series of unanticipated wild problems. This film, which relies heavily on Vikram’s seductive charm and flair, is constructed in such a way that the fight is more personal than public, and his ideas appear to be foreign to most people across the world. Mahaan is one of the best south movies on amazon prime and also one of the top 10 South Indian movies 2022.

The Myth Of The Nice Girl (Achcham Madam Naanam Payirppu) is a coming-of-age drama about a typical good girl from a traditional household who strives to create a balance between society standards and personal wants. It is one of the south Indian movie on amazon prime.

Oh My Dog! is a film about a blind Siberian Husky and a school-aged child who form an unbreakable friendship. It’s also about how people with disabilities, whether humans or animals have the same right to live in this world as everyone else.

An oppressed caste policeman and her half-brother go for the dominant caste men who raped her and burned her husband and child alive. The performances of Keerthi Suresh, who is fantastic as the revenge-obsessed Ponni, and Selvaraghavan, who brilliantly transforms Sangayya into the film’s pounding heart, are ultimately what keep the picture afloat and keep it from becoming a mindless violent film. One of the best South Indian movies dubbed in hindi 2022.

Cold Case is a hybrid genre film that tells a crime investigation story while also telling a horror thriller. The Assistant Commissioner of Police, Sathyajith, and his team are in charge of handling contentious and challenging cases. A man finds a waste bag entangled inside his net while fishing on a lake one day. The plot centers around how the ACP investigates the case and locates the murderer.

When the husband goes missing from police custody, a pregnant woman from a remote tribal tribe looks for him. A High Court advocate steps up in support to find her husband and seek justice for them. When the film was first released, a segment of the public was offended by a moment in which a calendar image showed a community emblem. To avoid offending people, the producers substituted a picture of the goddess Lakshmi for the community emblem. Will their fight for justice be successful? It is one of the best south movies in 2022.

Home is the film that goes along with the definition. South Indian movies are a must-watch on Amazon Prime for Indians. Oliver Twist, a technologically challenged father, makes a valiant effort to be a good friend to his two young sons. Two songs are performed by Maslen K Gafoor and Sreenath Bhasi in the film. Manju Pillai is the mother, and Indran is the father.

The reality is that portions of Home feel stretched, and the movie could have used some scissoring, but when it works, it works so beautifully that this criticism fades into the background in the face of the film’s overall appealing nature and loveable simplicity. The most valuable gift Rojin Thomas could have offered Malayalam film viewers this Onam season is Oliver Twist’s writing and Indrans’ performance.

Hope you enjoyed the list of new south Indian movies 2022. Grab some snacks and enjoy your leisure time and refresh your mind by watching these amazing flicks.