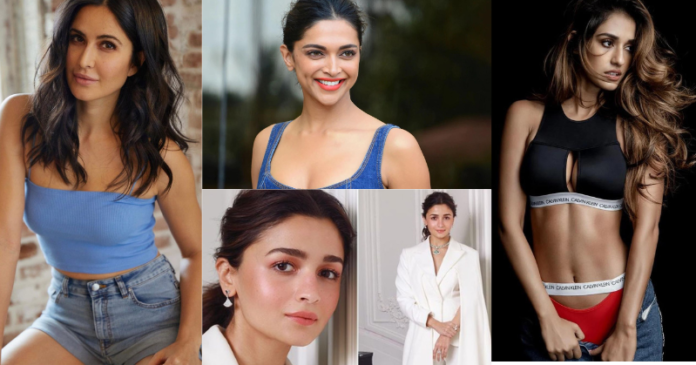 Bollywood is one of the flourishing film industries where the actors and actresses are generously paid for their performances. The Bolly beauties have a huge fan base that spans across the world. The actresses listed in the top 10 highest paid Bollywood actresses in India have to work hard to maintain their routines and bring out their best while playing a lead role in a movie. They also have millions of followers on their social media handles.

Here we have listed the top 10 highest paid Bollywood actresses in India 2022:

Bollywood’s highest paid actress and also the most successful is none other than Deepika Padukone. The star actress made her debut with the successful film Om Shanti Om and also starred in many high box office earnings Piku, Baajirao Mastani, Padmavaat, Ram Leela, and others. She is also the face of many national and international brands.

The successful actress who is a part of several blockbusters charges around Rs 15 – 29 crores for her projects. Deepika also worked on some International projects apart from Bollywood. She is an emotional but also a practical actress who knows how to act and is loved by her fans all over the world.

Also known as the “ Queen of Bollywood,” Kangana Ranaut is a well-known Bollywood actress. One of the Bollywood top 10 actress in India loves to be in the spotlight. Kangana also has a production company under her name. She became very popular after her performance in the movie Queen.

Former Miss World and Bollywood’s Desi girl is one of the highest paid Indian actress. She is the most hardworking and glamorous actress in the industry. Hollywood has also been a victim of her irresistible charm. She has worked on some important projects in Bollywood and is paid around a whopping Rs 18 crores as fees.

Alia Bhatt is a young and popular Bollywood actress who is the daughter of director Mahesh Bhatt. After some back-to-back massive hits she became a part of the Bollywood highest paid actress list in 2022. She has also been nominated by Forbes as one of the highest-paid Indian actress. Her fees for the Bollywood film, Darlings was Rs 15 crore, she was also paid big for the Sanjay Leela Bhansali’s epic, Gangubai Kathiawadi which was a hit at the box office.

Katrina Kaif’s beauty, acting, and dancing skills make her one of the top actresses in Bollywood presently. She has been listed among India’s highest-paid actresses by Wikipedia and Forbes. She is a hardworking actress who made her journey to the Bollywood industry from scratch. Katrina is a model and is the brand ambassador of several national and international brands. Katrina Kaif is reportedly charging around Rs 12 crore for her upcoming film, Jee Le Zara.

Kareena made her debut B-town in 2000 with the movie Refugee. The actress charges between 12-18 crores for a movie which makes her one of the Highest Paid Bollywood Actresses in India. The Bollywood beauty endorses a number of brands and likes to stay in the limelight.

According to DNA India, the PK actress charged around 15 crores rupees per film. The talented and beautiful Bollywood actress salary also includes the money she gets from endorsing brand products like Nivea, and Pantene, and also from her production company. Being one of the Highest Paid Bollywood Actresses she has worked in many hit and blockbuster Bollywood movies.

Daughter of Bollywood’s popular actor, Shakti Kapoor Shraddha is an Indian actress as well as a singer. She got her big break in the Bollywood industry in 2013 by acting as the lead in Aashiqui 2. She has also been a part of many box office hits like Haider, Ek Villain, Baaghi, ABCD 2, etc. She is popular for her cute looks and dancing skills and ranks among the top 10 actress of Bollywood.

Kriti Sanon is one of the most beautiful and talented actresses in Bollywood. She made her way to the top by working hard. Her acting skills need no introduction, she is also the face of many leading brands. The fresh face of Bollywood is one of the highest paid Bollywood actresses. She made her debut in a Telegu film and also got recognition after being featured in Heropanti.

Disha Patani is a popular face in Bollywood, once labeled as the national crush, she has been known for her looks and fitness. Disha made her acting debut in a Telegu movie but rose to fame after her role in M.S. Dhoni: The Untold Story. The gorgeous lady reportedly charges Rs 2.5 crores for each film.

Other Bollywood actresses who are close to making it to the list of one of the highest paid actress in Bollywood are Jacqueline Fernandez (2.00 crore per movie), Janhvi Kapoor (2 crores), Sara Ali Khan (2 crores), and Ananya Panday (1.50 crore).