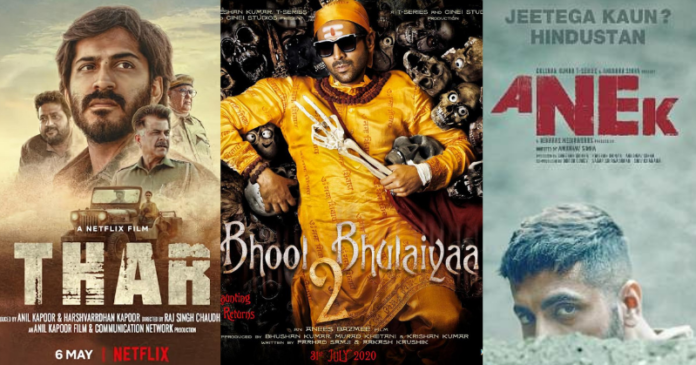 Here is the list of 10 Bollywood movies releasing in May 2022 that you can enjoy on your summer vacation:

One of the May releases 2022 is this Hindi-language comedy-drama film, Jayeshbhai Jordaar. The film features Ranveer Singh in the nominal role of the son of a traditional and conservative Gujarati sarpanch, who believes in equal rights for males and females in society. The cast includes Shalini Pandey, Ratna Pathak Shah, and Boman Irani. It is written by Divyang Thakkar, and Aditya Chopra and Maneesh Sharma are the producers of the film under the banner of Yash Raj Films.

Click Here to watch the trailer of Jayeshbhai Jordaar

Rocket Gang is the directorial debut of choreographer Bosco Martis which features Aditya Seal and Nikita Dutta in the lead roles. The upcoming Bollywood Hindi movie is a musical film, produced by Zee Studios.

Click Here to watch the trailer of Rocket Gang

It is an upcoming Netflix film which is a neo-western Indian action thriller starring Anil Kapoor, Fatima Sana Shaikh, and Harshvardhan Kapoor in the lead roles. Judging by the trailer the story revolves around a man who wants to avenge his past and moves to a big town to seek revenge. Anil Kapoor needs no introduction but if you are excited to see Harshvardhan Kapoor like us you should definitely watch this latest Bollywood film.

Set against the geopolitical backdrop of Northeast India, Anek is an Indian Hindi-language socio-political, action thriller. This new Bollywood action thriller film was directed and written by Anubhav Sinha. The film stars Ayushmann Khurrana in the lead role and is produced by T-Series. We are eagerly waiting to watch Ayushmann’s performance in this upcoming Bollywood thriller film.

Dhaakad is a Hindi action-thriller movie starring Kangana Ranaut, Divya Dutta, and Arjun Rampal. directed by Razneesh Ghai and The film is produced under the banners of Soham Rockstar Entertainment, Sohel Maklai Productions, and Asylum films by Deepak Mukut and Sohel Maklai. The trailer is out.

Major is a biographical film on a member of the Elite 51 Special Action Group of the National Security Guards who was killed in action during the 26/11 Mumbai attacks, Major Sandeep Unnikrishnan. The upcoming May 2022 movie stars Adivi Sesh, Revathy Prakash Raj, Murali Sharma, and Shobhita Dhulipala.

You must have watched the massive hit Bhool Bhulaiyaa starring Akshay Kumar and Vidya Balan. The first movie of this franchise was one of the best Bollywood comedy movies. Bhool Bhulaiyaa 2 is the sequel of this horror comedy that is all set to release in May 2022. We are excited about the movie so let’s hope they don’t ruin the appeal and funny plot of the first film with this one. Bhool Bhulaiyaa 2 cast includes Kartik Aryan, Tabu, Kiara Advani. The cast retained from the original film were Rajpal Yadav, and Paresh Rawal.

Click Here to watch the trailer of Bhool Bhulaiyaa 2

Mrs Chatterjee Vs Norway is an upcoming Bollywood drama starring Rani Mukerji, written and directed by Ashima Chibber. Rani Mukerji fans are eagerly waiting for its theatrical release. Based on the true story where the children of an Indian couple were taken away from them by Norwegian welfare services. The film is produced by Madhu Bhojwani, Monisha Advani, and Nikkhil Advani’s Emmay Entertainment and Zee Studios.

This Bollywood comedy is expected to be one of the May 2022 releases. The movie stars Paresh Raval, Abhimanyu Dasani, Sharman Joshi, Divya Dutta, and Mrunal Thakur. The story revolves around a family of misfits who want to get their daughter married to a well-established NRI suitor. The plot turns comical when they try to hide some secrets from the prospective groom. If you are in the mood for some comedy, especially from the comedy star Paresh Raval, you should not miss out on this one.

Click Here to watch the trailer of Aankh Micholi

The Bollywood movie is expected to release this summer. The movie stars Sonakshi Sinha, and Huma Qureshi. The story revolves around the journey of two plus-size women Saira Khanna from New Delhi, and Rajshree Trivedi from Meerut as they explore and navigate society’s beauty standards.

Click Here to watch the announcement video of Double XL

We hope you are as excited as we are for the upcoming releases this May 2022. The list includes movies of various genres like romance, thriller, comedy, drama, etc. So, get ready to book your tickets on the mentioned release dates if you want to enjoy the first show and avoid getting spoilers.

Also Read: Top 10 Hollywood Movies Releasing In May 2022 To Watch In Theatres