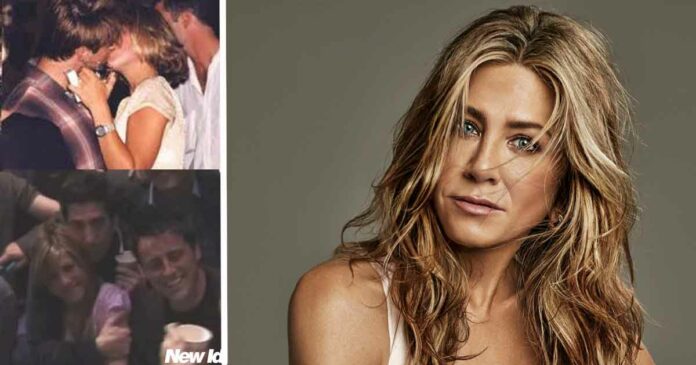 We have all watched Friends and have fallen in love with the cast forever. But, do you know much about their real life? The life we have seen on-screen is beautiful, but is their real life the same? Turns out, in their real-life they have their own problems too!
Let’s catch up with some of the well-known secrets from the lives of our favourite Friends Cast’s life. Many of us might not know these because they came into light and eventually died with time. So get ready to explore.

Dark Secrets From The Lives Of Friends Cast

Jennifer didn’t invite half the cast to her wedding.

Aniston’s wedding with Justing Theroux, her second husband, was a surprise. On top of that, half of the cast of Friends were not invited to the wedding. As per reports, Matthew Perry, Matt LeBlanc and David Schwimmer were not at the wedding.

When Matt was asked by The People about it, he replied, “If she wanted me there, I would have been there. I think she’s happy. And that’s all I care about.”

Chandler or Matthew reacted to it saying, “It was a surprise to me, as well, I wasn’t invited. So what can you do?”

Doesn’t this sound odd considering the level of the bond they share in our mind at least?

Matt LeBlanc with a stripper.

LeBlanc in an interview in 2005 admitted that he once interacted with a “sexually aggressive” stripper while on a bike road trip with five of his friends in Canada.

He told the National Enquirer, “The stripper was all over me, I was drinking, and she was crossing the line … When I realized the situation that was unfolding I felt I was being careless and irresponsible, and I had to get the hell out of there.”
Doesn’t sound like Joey, does it?

Scott Howard was the ex-manager of Lisa Kudrow who sued her in the year 2008, claiming Lisa owed him residuals from when he used to manage her. Actually, it was more like, earnings from all those reruns of Friends.

The case went on for quite a long time until 2014, a jury found Lisa in breach of contract for which she had to shed over $1.6 million. But, we guess it didn’t much matter to her as she made a little more than that from a single episode of Friends in 2004.

Funny Chandler did not always have quite happy days even during the shoot of Friends! He struggled with substance abuse which led him to rehab twice even while when Friends’ success was touching its peaks.

He was quite open about his struggles and in 2013 he admitted about addiction to alcohol and pills and also sais that he couldn’t stop. Again, recently in 2016, he admitted to BBC2 Radio (via USA Today) that his addiction was so bad that it has led him to forget his filming three years of Friends series. Perry was asked to pick his favourite episode of Friends but his reply was, “I think the answer is, I don’t remember three years of it. So none of those… somewhere between Season three and six.”

Matt LeBlanc and her daughter, Marina.

Friends fans were really saddened to know that Matt’s daughter, Marina was diagnosed with cortical dysplasia, a condition which affects the brain, bones and motor skills. It would have been really tough for a father as Marina was only 11 months old at that time.

As a proud father, he once told The Mirror, “Spending time with her is the best thing I’ve ever done. We have a great bond and it’s the best thing in my life.” Luckily, while Marina was 11 years old, she outgrew the condition and is leading a healthy life now.

Matt LeBlanc and his struggle with fame.

Joey in Friends was an actor by profession and seemed to be really happy with fame. But contrary to that, Matt had to face a slight darker situation with his newfound fame.

Matt said the show’s incredible success brought in a situation where he could “barely leave the house” because he felt completely burned out. He said to The Mirror, “It was a very dark time, I almost had a nervous breakdown.”

Ross Geller played by David Schwimmer after attaining fame through Friends found it quite difficult to cope with it. In 2016 David appeared on The Hollywood Reporter’s podcast, Awards Chatter, where David revealed that success wasn’t all it was cracked up to be. He said, “It was pretty jarring and it messed with my relationship to other people in a way that took years, I think, for me to adjust to and become comfortable with.”

David had an approach to acting where he used to observe other people and their life to learn new things. But with the fame he received, it became difficult for him to go unnoticed anytime. Eventually, this resulted in him to “hide under a baseball cap and not be seen.”

Courteney was irresistible in the show, she grew beautiful with every season and looked stunningly beautiful. Admit it or not, she always looked way too out the league for Chandler! Though always the best couple ever.

But currently, she looks a lot different from what she used to look. And she herself admitted to having undergone cosmetic enhancements for better but they turned out to be a bit unplanned.

In 2017, Cox opened up New Beauty and had a frank chat about the things she did to maintain her youthfulness.

Courteney said, “I grew up thinking that appearance was the most important thing. That’s kind of sad because it got me in trouble. I was trying so hard to keep up, and I actually made things worse.”

Soon after realising things weren’t going good, eventually, Cox got all her “fillers dissolved” and pivoted to more “natural” procedures such as dietary supplements, laser treatments and “micro-needling,” which she says is used to “strengthen your muscles.”

In an interview with The Hollywood Reporter, Jennifer once admitted that she and her mother are “all fine now,” but things were not so great while she was growing up. “She was very critical of me,” Jennifer said of Dow, her mother who was not invited to Aniston’s wedding to first husband Brad Pitt. “Because she was a model, she was gorgeous, stunning. I wasn’t. I never was. I honestly still don’t think of myself in that sort of light, which is fine. She was also very unforgiving. She would hold grudges that I just found so petty.”

‘Twice, I think,” Matt said while revealing to U.K.’s Telegraph in 2014 that he was arrested for driving under the influence(DUIs). He also said, “When I was young and stupid. I wasn’t driving fast, just crooked. The press never got hold of the mugshots. I was lucky.”

David Schwimmer’s NYC neighbours were pissed off with him.

Once he decided to demolish a preserved 1852 townhouse in the neighbourhood and build a completely new one from scratch. But the idea was not well taken by the neighbours, and even got annoyed by the construction. One of the neighbours got so pissed that he went on and spray-painted “Ross Is Not Cool” on a fence, according to Gawker.

Well, fans of Friends have been saying the same thing for a long time.

Matt was accused of cheating in 2014.

Rumours circulated in November 2014 that Matt cheated his long-time girlfriend, Andrea Anders at a Halloween party in Austin, Texas. In Touch (via E! News) obtained photos of LeBlanc getting up close and personal with various women and the magazine went as far as to allege that Matt actually hooked up with “several scantily clad women” at the party.

However, Matt’s team quickly responded to the report by saying, “That absolutely did not happen, fans were coming up to him all night asking for pictures.”

The claims can never be verified but after a few months on January 2015, Andres and Matt announced they officially broke up leaving behind a history of eight years.

LeBlanc allegedly blindsided his wife with a divorce.

Matt has hit the headlines many a time, it was in 2006 that Matt divorced his wife, Melissa. She was “absolutely blindsided” by the decision and had “hoped for a reconciliation.” as said by the sources for People.

Back in those days, it was also heard that Matt was dating his Joey co-star, Andrea Anders and some people alleged that Matt’s relationship with Andrea was one of the reasons why he split with his wife.