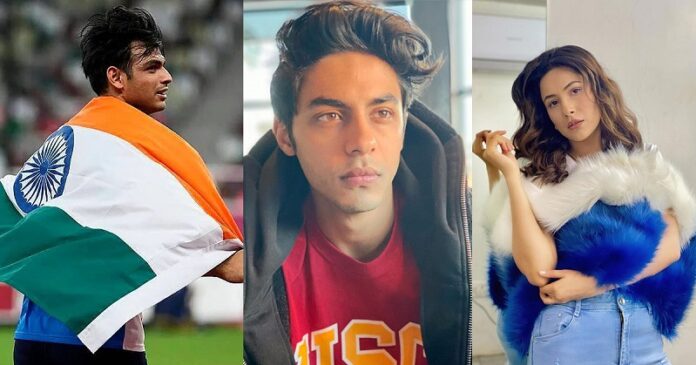 As the year 2021 comes to a close, let us have a look at the most searched people on Google in India in 2021. Google recently revealed its Year in Search 2021 list, which is a compilation of the top Google Trends 2021 in India across several categories such as movies, recipes, and personalities, among others.

Here is the list of the top 10 most searched personalities in Google India.

Neeraj Chopra became a household name after winning a gold medal in the Javelin Throw in his Olympic debut at the 2020 Tokyo Olympics. He is just the second Indian to win an individual Olympic gold medal, trailing only Abhinav Bindra, and he is the youngest Indian Olympic gold champion in an individual event. Neeraj Chopra became the most searched person on Google in India in 2021 as a result of his excellent performance at the Tokyo Olympics.

The NCB seized Shahrukh Khan’s son Aryan Khan in October 2021 after raiding an alleged rave party on a cruise ship off the coast of Mumbai. He got imprisoned in Arthur Road for over a month before getting granted bail by the Bombay High Court.

Shehnaz Gill is one of the top three most searched people on Google in India in 2021. She got to prominence after competing on Bigg Boss in 2021, and she has also been in various music videos. People on social media flooded her with love and support following the unexpected death of her rumored lover Siddharth Shukla. Fans all throughout the country got moved by her video musical tribute to Siddharth.

Raj Kundra ranked fourth on Google’s list of most searched people in India in 2021. In July 2021, he got detained on accusations of helping in the creation and distribution of pornographic videos. He is now released on bond.

The business leader and entrepreneur gained headlines for the ‘Musk Effect,’ in which a single tweet by him causes crypto prices to rise or plummet. He has also eclipsed Jeff Bezos as the world’s wealthiest person. He is the founder and CEO of SpaceX, the CEO of Tesla Inc., and the co-founder of Neuralink, OpenAI, and Zip2.

Vicky Kaushal made news for both professional and personal reasons. In an intimate ceremony, he married Bollywood actress Katrina Kaif at the Six Senses Fort Barwara in Rajasthan. He attended the premiere of ‘Sardar Udham’ and announced his next project, Govinda Naam Mera.

PV Sindhu, the world’s best badminton player, has gotten rated sixth on Google’s list of the most searched people in India in 2021. She earned bronze in the 2020 Tokyo Olympics, becoming India’s second individual athlete to win two straight medals at the Games. She is also the only Indian to have won the World Badminton Championship.

The 27-year-old Olympian and freestyle wrestler participate in the 65-kg weight class. His bronze medal at the 2020 Tokyo Olympics catapulted him to international prominence. Punia was born in the hamlet of Khudan in the district of Jhajjar in the Indian state of Haryana. His father urged him to pursue wrestling when he was seven years old. Punia grew raised in the country.

Former Indian wrestler and Olympian Sushil Kumar have been in the headlines following his arrest by the Delhi Police in connection with the death of former junior national wrestling champion Sagar Dhankhar and the Chhatrasal Stadium riot.

Natasha Dalal married her long-term partner, Bollywood star Varun Dhawan, in a private ceremony on January 24, 2021. Natasha became the 10th most searched person on Google in India in 2021 as their wedding became the talk of the town.