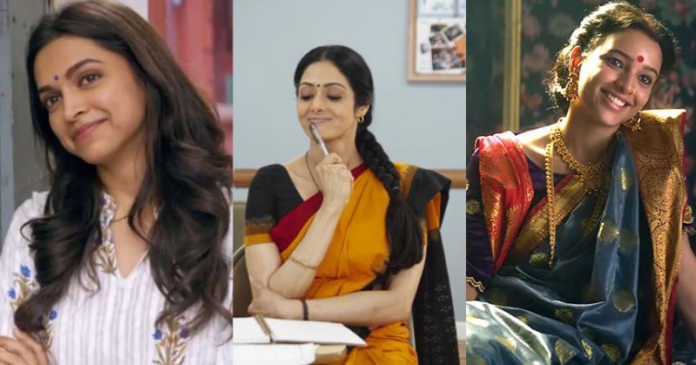 In the 80s, women characters in Bollywood movies have been portrayed as enduring, dutiful partners to their male counterparts. There were hardly any women-oriented movies in Bollywood. The storytelling was gender-biased and the women were often pictured as damsels in distress with submissive traits.

Today, there have been some changes in the portrayal of female characters in Bollywood movies, and the female lead’s character development is also given importance. The movies with smart female leads show emotional depth and have personalities of their own.

More women have made their place both behind and in front of the camera in the film industry. The women-centric films now address the feminine complexities and struggles besides delivering authentic performances. Let’s take a look at some of the female-oriented movies with some iconic Bollywood female characters. We have listed the movies with badass female characters in Bollywood.

Here is a list of the top 10 women-centric Bollywood movies with strong female leads you shouldn’t miss:

Written by Juhi Chaturvedi, the narrative is gripping and real. Piku, the female lead is portrayed as a modern, independent woman who lives life on her terms. The story revolves around Piku who looks after her ageing, sick father and she struggles at juggling her romantic and professional lives.

The lady is unapologetically opinionated and sexually liberated. She is a woman with empathy but she never participates in anything she doesn’t believe in. Her real, vulnerable character is so relatable that it will keep you thinking even after you finish watching the movie. It ranks among the top movies with female leads. The movie stars Deepika Padukone, Amitabh Bachchan, and Irrfan Khan. Look out for Deepika’s spectacular performance as Piku and the beautiful backdrops of Bengal.

Queen is one of the best woman empowerment movies. This Bollywood movie follows the life of Rani, whose fiance calls off their wedding just the day before. Shattered and heartbroken but strong at the same time Rani decides to go on her honeymoon alone to Paris. The female lead’s character development in the movie is beautiful. Sheltered all her life with no opinion of her own, Rani’s journey of self-love, friendship, and self-discovery is something everyone should witness. This makes her one of the iconic Bollywood female characters. This female-centric Bollywood film stars Kangana Ranaut as Rani, Rajkumar Rao as Vijay, and Lisa Haydon as Vijayalakshmi.

English Vinglish is one of the best women-centric Bollywood movies with a bold female lead. The raw, and real portrayal of the female lead Shashi, played by Sridevi is a breath of fresh air. The patriarchal backbone of Indian families is broken in this film which follows the journey of a housewife who’s often belittled for not knowing English. She begins to learn the language when she travels abroad with her family to attend a wedding. She not only nails the language but also realises her worth and that the efforts of homemakers are undervalued. Watch this movie to get inspired as this is one of the best feminist movies in Bollywood.

Click here to watch the Trailer of English Vinglish

An insomniac with an unconventional career, relationship insecurities, and childhood trauma meets a psychologist in Dear Zindagi. The female lead Kaira, played by Alia Bhatt is in her healing phase. Her struggles and mental health are so relatable that she reflects the plight of the generation of young women. Inspite of her family and people misunderstanding her she takes the big decision alone to go to therapy. The journey of Kaira’s healing is motivating. Dear Zindagi is another masterpiece from Gauri Shinde featuring Shah Rukh Khan as the psychologist. Gauri Shinde is the best at making women-oriented movies.

Click here to watch the Trailer of Dear Zindagi

Mardaani is one of the Bollywood action movies with female lead. The lead character Shivani, played by Rani Mukerji represents the honorable policewomen of the Indian Police Force. The story focuses on her mission to unravel a child-trafficking cartel. The movie showcases Shivani’s emotional stability and dedication to her duty. Ranking among the top movies with female leads Mardaani sure leaves an impact. Look out for some action-packed performance by one of the badass female characters in Bollywood. There is also a sequel to this movie Mardaani 2 which was released in 2019. It is one of the best women empowerment movies Bollywood has ever made.

This woman-centric film is highly relatable and revolves around the women who take the reins of their lives but cannot escape the judgemental of the patriarchal society. The story follows the female lead character, Minal Arora (Taapsee Pannu) who approaches the legal system for justice after being molested by a politician’s nephew.

Her character reflects the lives of many women who move out of their homes, are sexually liberated, and enjoy a good party. But after the unfortunate incident while defending herself she faces the judgment of the male-dominated society who blame her way of living instead of punishing the molester. The importance of consent in sexual relationships is made clear in this film. Minal is unapologetic but her courage is what makes her stand out.

The story of a child bride who grows into a strong woman, this supernatural movie addresses many degrading social aspects prevalent in the society like the condemnation of female sexuality and the way males dictate the world. The lead, Bulbbul, played by Tripti Dimri challenges male entitlement. When incidents of supernatural murders increase in her village, the story unfolds.

One of the highly celebrated women-centric Bollywood movies, the thriller where the female lead Vidya Bagchi, a pregnant lady is determined to uncover the mystery around her husband’s death. While most Bollywood revenge movies include more action than wit, this one is balanced. Vidya’s vulnerability, strength, and wit will not let you lose the grasp for even a moment. Vidya is indeed one of the iconic Bollywood female characters. It is also one of the highest-grossing Bollywood movies with a female lead.

Based on a real-life story and true events Neerja has been one of the best Bollywood movies with a strong female lead. The story revolves around the real-life incident of Neerja Bhanot, who boarded Pan Am flight 73 as a flight attendant in 1986. The brave woman Neerja risked her life to save hundreds of passengers by stalling the terrorists when the flight was hijacked by them. In the movie, the female lead Neerja has been played by Sonam Kapoor.

The lead character of Raazi Sehmat Khan is brave and fierce. Sehmat, played by Alia Bhatt is an undercover RAW agent who shifts to Pakistan and works as a spy to gather some valuable information about the enemy. She is married off by her father to a Pakistani family where she risks it all to stay loyal to her country. The female lead in the movie goes through emotional turmoil but holds her ground to survive. Raazi is one of the highest-grossing Bollywood movies with a female lead.