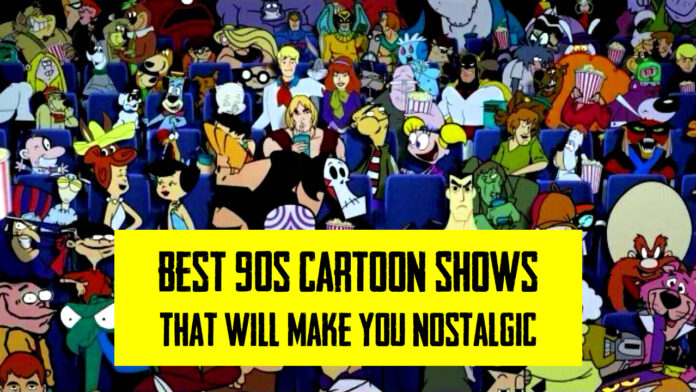 Growing up as 90s kid, When it comes to cartoon shows, nothing can beat the fun and charm that 90s cartoons used to have. Anyone born in that era would agree that cartoons have had a major impact on shaping their childhood. Unlike today’s kids, we didn’t have the luxury of smartphones and internet have on our plate for entertainment.
We only thing we had was watching everything that was on TV.
From the Chad and Stud, Handsome Hunk – Johnny Bravo to the brave Powerpuff Girls, mighty Saiyans to the best trio of Ed, Edd n Eddy, these old cartoons gave us our favorite animated heroes to choose from.

Here are 10 most nostalgic cartoons from 90’s:

1. Scooby-Doo Where Are You!

If you’re from 90’s and not a fan of this show, then sorry bro, we can’t be friends. This show doesn’t need any introduction.

Scooby, and his friends use their intelligence to uncover the mysteries and that appear. Scooby with his best friend shaggy and other friends Velma Dinkey, Daphne Blake and Fred Jones used to solve the supernatural mysteries with their bravery and intelligence. They are the best team, better than most of the detectives.

Popeye, the best sailor in the world. Popeye gains a boost in strength by eating spinach. Popeye is one of the most recognizable and beloved cartoon characters in the world, and is consistently regarded as one of the best ever created.

In each episode of Popeye, he finds himself in some weird situation full of adventures. By the time of 2000’s, Popeye becomes favorite cartoon of every kid.

Pokemon or Pokémon is the abbreviation for Pocket Monsters. It is the story of a 10 Year old boy Ash Ketchum, who starts his journey as a Pokemon trainer with the dream of becoming a Pokemon Master, World’s greatest Pokemon Trainer. He starts his journey with his companion Pokemon Pikachu, an electric type Pokemon, who he gets from Professor Samual Oak. In his journey he meets two friends Misty and Brock. On his quest, Ash defeats different types Pokemon trainers and captures a lot of Pokemons.
Pokemons were essentially monsters that could be contained in balls, called Pokeballs.

If you’re a hardcore fan of this show like me, here is a Pokemon Quiz for you, Can You Identify All These Pokemons Correctly?

Kochikame is the best comedy anime/cartoon series in my opinion. It was one of my favorite TV cartoon. The story revolves around a police-station in Front of Kameari Park in Katsushika Ward, which is the downtown part of Tokyo.

The Story revolves around the misadventures of middle-aged cop Kankichi Ryotsu, who is the main lead character of KochiKame. Along with his colleagues Reiko Katherine Akimoto, Keiichi Nakagawa, Daijirou Ohara, Hayato Honda and more.

For almost forty years the Teenage Mutant Ninja Turtles have made their way into our collective consciousness through various adaptations and become a cultural touchstone that most of us can feel affinity for. No cartoon, comic, or video game can survive without a cast of characters and their personality and TMNT is no different.

Leonardo, Donatello, Raphael and Michelangelo are the Teenage Mutant Ninja Turtles, trained in the art of Ninjutsu by a wise rat since they call Master Splinter.

Elon Musk, Who? Our Rich boy Richie Rich can buy him 10 times and still left with some cash in hand. Despite being so rich, he spends his money traveling and helping the needy people. He loves to stay grounded. There’s not an exact number for Richie’s wealth, but his wealth ranges from $1.5T to $2T in multiple publications, making him one of the most wealthiest comic character.

Dragon Ball is my all time favorite series that I still watch. Dragon Ball is the first series of this franchise revolving around the kid Goku, who is from Saiyan race which is a nearly extinct extraterrestrial race, his grandpa Gohan, his friends Bulma, Yamcha, Krillin. This was the time when Piccolo was his enemy.

After 5 Years from the end of Dragon Ball Anime, Dragon Ball Z started with young adult Goku. Story of Dragon Ball Z starts from Raditz, who is Goku’s long-lost big brother. Who told him that Goku was sent to earth to conquer the planet, but a traumatic brain injury made him lose his memory of the mission as well as his true blood-thirsty nature.

After that God of Destruction Beerus, his angel Whis, other GOD (God of Destruction from other universes) appear in the series and their angels, The Supreme Zeno, who can erase the universe, the mighty Jiren, Toppo and others.

Dragon Ball Z has been divided into sagas as Cell Saga, Buu Saga.

After Dragon Ball Z, Dragon Ball Super get started, in which the power level was so massive that characters can literally blow up the universe.

Why Dragon Ball Z is so famous?

Many people wonder why Dragon Ball Z is so famous even when there are so many better anime are there than Dragon Ball Z? The answer is not so simple, because of Goku which became the favorite character of every anime lover, the power level and transformations, its storyline are some of the reasons. There are many Dragon Ball Z games, Dragon Ball Cards are in market which also makes this anime more popular than other.

However, we will try to explain 5 reasons why Dragon Ball Z is the most popular anime in India in another article.

Ed, Edd n Eddy was a classic cartoon network show of the last 90s and early 2000s. It was started in 1999 by Danny Antonucci. The show revolves around the 3 friends with the same name and age, the only difference was the spelling of their nickname and their personality. One is so dumb, second is vicious and the last is educated and smart. So, as a 90s Kid this trio was most entertaining for me.

Johnny Bravo was the part of the classic cartoon network show in the late 90s. This character was so mature and had some adult jokes as well. Johnny Bravo probably caused a stir amongst feminists who thought the show was corrupting the youth and degrading women.

The show revolves around a self-centered, muscular, blonde-haired womanizer, Chad and stud handsome hunk Johnny Bravo. Johhny’s only goal in life is to pick up hot women he meets and date them. When he saw any attractive young girl/lady, he would work the Bravo charm on her, flexing his muscles in front of her, and using hilarious, but very womanizing pick up lines such as “Hey baby, how about me and you stare at each other and admire each others prettiness”. He had so much great humor, which makes it almost more enjoyable as an adult.

Power Puff Girls was probably the first and one of the only TV shows of the time that started teaching us about feminism. If Johnny Bravo was meant for boys, Powerpuff Girls is for girls. Power Puff Girls characters have Bubbles, Buttercup and Blossom, who were so cute, but the little girls could be fierce warriors when the situation demanded.

These are the my favorite cartoon shows from 90s, isn’t this enough? Alright, here is the List of 50 Old Animated Cartoon Shows from 90s.