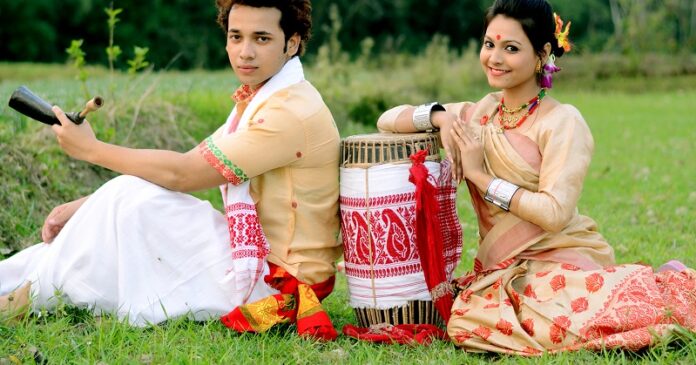 Assam is a beautiful state in India that is also one of the Seven Sisters in the North East. This is a place with deep cultural roots and the serene beauty of lush green forests. The people here take immense pride in the refinement of their cultural roots. The way they carry on their culture and also in the way the people dress traditionally, the people of Assam very elegantly managed to carry forward the flame of their roots.

So, let’s take a look at the traditional dresses of Assam for both men and women and also what different tribes of Assam wear traditionally.

Traditional Dress of Assam for Women

Sador or Chadar is an Assamese traditional dress that is a long piece of clothing. Crossed at the lower waist on the right side, it is worn on the left shoulder. Interestingly, it is available in various patterns and colors. Usually, this dress is made from silk, Muga, and cotton. It is also considered the main traditional dress of Assam.

Mekhela is a cylindrical traditional dress of Assam. Interestingly, it starts from the upper waist and ends at the lower feet. This dress is made from Eri silk, Pat silk, Muga, and cotton. This is comfortable to wear and is available at an affordable price. On special occasions of Assam, women wear this dress.

A blouse is a well-fitted upper garment that is worn by women that looks stunning with ethnic or traditional attires. This surely comes under the traditional dress in Assam which offers a variety of sleeves and collar designs. Besides that, it also comes in different graphics and prints.

Riha is a traditional dress of Assam that is worn only on special occasions such as Anna Prashan or prayers in Namghar. It forms a part of the bridal trousseau and is worn with a Mekhela chador. The motif-rich Riha adds a unique beauty to the entire attire.

Traditional Dress of Assam for Men

Tongali is an Assamese traditional dress that is worn by men. It is a waistcloth that is worn like a belt. If you don’t know, this cloth has a beautiful place in Bihu dance, the traditional dance of Assam. It is used as a loincloth by the indigenous people of Assam, except farmers and fishermen.

Dhoti is a traditional dress in Assam as well as many other parts of India. It is worn on the waist and is usually white, cream, or yellow in color. This piece of cloth is 5 yards long and covers most of the leg. One end of the dhoti is knotted around the waist while another end is brought between the legs and tucked inside the waistband.

Kurta is a globally accepted type of clothing that is worn by the Assam men as well. It is a loose shirt whose length is usually going till the knees or even below it. It is made of light material like light silk or cotton and has a cultural significance in the state.

Paghuri is a traditional dress of Assamese men. However, it is only worn on special occasions. It is worn during the Sattriya dance as well as during the cultural programs of Neo Vaishnavs. If you don’t know, this dress is a part of Neo Vaishnav culture.

The men of the Dimasa Tribe traditionally wear Sgaopha or a Phagri. Usually, Phagri is yellow or green in color. However, when it comes to marriages or any other special occasions, the groom wears a white turban with a red thread tied below the chin. They also carry a Rigdo with them that almost looks like a muffler. The Dimasa Tribe’s men also wear Risha or Gainthao that differs in length. While the Gainthao reaches the ankle, the Risha comes up to one’s knee.

If we talk about the women of the Dimasa Tribe, they wear Rigu that is fairly similar to the Mekhela Chador. The Rigu is a long piece of cloth that usually reaches up to the ankles and is worn from the waist down. Interestingly, Bathormai is a kind of Rigu that has only one design throughout the cloth. It is widely worn during the summer seasons because it reaches the ankles. Besides that, they also wear Rijamphain. It is a kind of dress that is white in color and runs from the chest to the knees. These people have simple costumes that bring out the hidden beauty in them.

The Bodo Tribe wears one of the best traditional dresses of Assam. The men of this tribe wear the common dress of Assam i.e. the Gamosa. To cover the body waist down to the knee, they use Gamosa. While the upper half of the body is supposed to be kept bare. However, nowadays, they use shirts to cover the upper half of the body. Interestingly, their footwear was quite unique. Earlier, they use to wear Khorom which is made of wood.

The women here are seen wearing the Dokhna. It is a dress-like cloth that they wrap around their body down to the ankles. This Dokhna is made of various patterns and Agor. If it does not have Agor then, it is considered a bridal dress. And, this bridal dress is known as Salamatha. The people here produce some fine clothes that everyone finds elegant.

The dress of the Mishing Tribe’s men and women is one of the best Assam traditional dresses. The men of the tribe wear Gonru Ugon. It is a Dhoti-like piece of cloth that is worn from the waist down. With that, they wear Mibu Galuk. It is a shirt like a dress that is used to cover their upper body.

The women of this tribe wear simple Assam traditional dresses. This tribe wears the Mekhela Chador which is very famous in Assam. It is black in color and is known as the Yakan Age-Gasar. They wear bright-colored blouses, especially on any occasion or marriage.

Since the people of Rabha Tribe are deeply attached to their traditions, they showcase that by wearing one of the best Assamese traditional dresses, especially women. However, the men of this tribe wear the usual Dhoti and Gamosa. This is the common Assamese dressing code that is followed by men.

On the other hand, women of this tribe dress very beautifully. Their dress is known as the Koum Kontong. It is a kind of skirt with exquisite patterns that is wrapped around their waist. And, to cover their upper body, they use Kambang. Besides that, these women accessorize with a belt or cummerbund that is made of beautiful shells and pearl balls. And, they tie it around their abdomen.