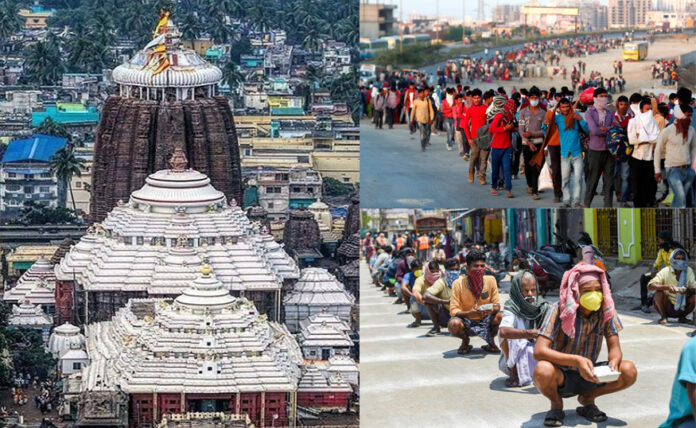 Temples and Trusts are an integral part of India. We seek God’s grace when we are happy, sad or in trouble, so basically every time. Recently, life has changed a lot ever since the unforeseen outbreak of the CoronaVirus. People can’t even visit the temples to offer prayer in these hard times.

Statistics only show a rapid increase in the number of cases, and it seems tough to stop the pandemic. The nation is struggling to keep its economy on track. Millions have lost jobs, and many are starving for food, especially the poor and oppressed. To take care of the thousands of people suffering, be it the patients or the multitudes rendered homeless on the road, a massive amount of money is requisite. Sometimes, the Government alone cannot take the entire burden upon their shoulders.

Even though we couldn’t visit God at his home, he never failed to answer, or at least the people representing God didn’t fail to respond.

The temples in India, especially, the big and historically significant ones, receive a huge flow of devotees and tourists during regular days, and these temples receive a massive influx of income. With the current situation challenging the nation’s capability to look after its enormous population, various temples from different corners of the country have come to the rescue, donating vast sums of money to their respective state governments and the central Government to tackle the dire situation.

Here is a list of temples that have made contributions towards Covid-19 relief funds or did their part in their way.

The Shirdi Sai Baba Sansthan Trust has put its best foot forward in tackling the ill-effects of the pandemic. The CEO of the trust, Arun Dongre, broke the news that the trust would be donating an amount of 51 crore INR to the CM’s relief fund in Maharashtra. Furthermore, they have taken up extensive measures to help district police personnel and other frontline warriors.

The Rani Sati Mandir in Rajasthan has gone out of its way to assist the State Government in tackling the pandemic. All over the country, religious places are not operational to stop the spread of the virus, but Rani Sati Mandir decided to open its doors to shelter those afflicted by the virus. As many as 200 rooms of the Temple are serving as isolation wards.

Seven Swaminarayan Temples in the state of Gujarat raised a total of ₹1.88 crores to help fight the destructive outcomes of the pandemic. Their efforts brought food to multitudes of helpless people. Furthermore, different Swaminarayan Temples across Gujarat arranged as many as 500 rooms to serve the purpose of quarantine facilities.

The Devasthan Management Committee raised a total of ₹1.50 crore for the Chief Minister’s Relief Fund, with the addition of ₹50 Lakh that will be invested by the Collector to improve the existing medical facilities to combat the virus.

The Kanchi Muth recently contributed 10 lakhs INR each to the State Government as well the centre in a pursuit to fight the pandemic on behalf of Sri Kanchi Kamakonti Preetam.

The trust in Patna did not fall behind in its efforts to help the nation combat the virus. They have donated Rs 1 crore to the Chief Minister Relief Fund to help the state fight against the outbreak. Apart from this huge donation, they have also assured to help the poor and the needy in other ways possible.

The trust has proven its generosity on other occasions as well. They released a statement back in November 2019 confirming a considerably huge amount of donation for the construction of Ram Mandir.

The Mahamaya Mandir Trust in Chhattisgarh has made donations to the Red Cross Society as well as to the Chief Minister’s Relief Fund. They donated a sum of ₹ 1,11,000 to the former and ₹5,11,000 to the latter.

In a pursuit to help concerned authorities fight the drastic consequences of the pandemic, the board employees of the Temple donated their day’s salary towards the state’s relief fund. In contrast, the gazetted staffs donated two days’ worth salary for the same.

The Shrine also arranged a quarantine facility with 600 beds available to the district authorities. Also, they arranged accommodation for officers on emergency duty. Ration kits were distributed among people living in and stuck in slum areas in Katra.

Another temple coming forward to make a significant contribution is the Ambaji Mandir in Gujarat. They donated a considerable sum of 1.1 crore INR to the Gujarat Chief Minister’s Fund. Furthermore, the Temple’s trust also invested in feeding a large number of poor and needy people.

Much like the other temples in Gujarat, Somnath Mandir came forward to aid the State Government in providing relief to the general mass during these hard and testing times by contributing one crore INR.

The age-old Temple from the North-Eastern corner of the country came forward to join the force tackling the pandemic. The Kamakhya Devalaya has recently extended Rs 5 lakh to the Assam Arogya Nidhi Scheme to fight against the Ocvid-19 virus.

The Jagannath Temple Administration has also come forward to help the nation fight against the pandemic. A statement from the temple registration reads-

“As per the decision of the Managing Committee of Shree Jagannath Temple, Puri, an amount of ₹1,51, 00,000 /(One crore fifty-one lakh) is contributed towards Chief Minister’s Fund Relief for Covid-19 from Temple Administration.”

According to a news outlet, 62 temples from Odisha have donated a total of Rs.1.37 crores towards the Chief Minister’s Relief Fund; this excludes Jagannath Mandir. To mention a few, Tarini Temple at Ghatagaon, Majhighariani Temple in Rayagada and Sakhi Gopinath Temple at Satyabadi donated Rs 20 lakh each. While Maa Mangala Temple at Kakatpur and Gorakhnath Temple in Jagatsinghpur donated Rs 10 lakh each.”

From the above-listed contributions of different temples from different parts of the country, it is evident that the temple communities of the country are doing their absolute best to help their many devotees and the citizens of the country as a whole. These are a few examples we have listed; we are sure there are many more contributions worth mentioning getting added every day, we would appreciate you to put them in comments for everyone to acknowledge.