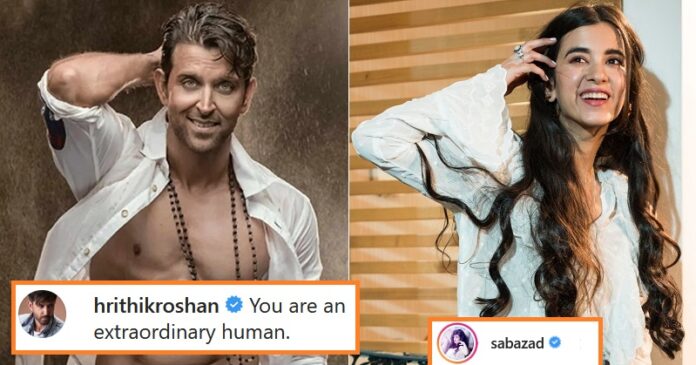 Hrithik Roshan and rumored girlfriend Saba Azad are the most happening couple in tinsel town. The two have been spotted and pictured together hand in hand on several occasions. Saba was also spotted in Hrithik’s family picture posted on Instagram by Hrithik’s uncle Rajesh Roshan.

It has also been speculated that Saba is even close to Hrithik’s ex-wife Sussanne Khan. Hrithik’s family members also sent a special meal to Saba, last week when she was sick, she shared a picture on her Instagram story with the caption: “When you are homesick but have the bestest hoomans ever feeding you.”

Saba took to her Instagram account and posted a video on Sunday, in which she can be seen humming a Bengali song from ‘Goopy Gyne Bagha Byne’, Satyajit Ray’s classic film. She mentioned that she learned the song when she was a kid, she didn’t even understand the language at that time. Among the first ones to comment on her video was Hrithik Roshan, followed by the actress Konkona Sen Sharma and others.

“Sick at home with no energy to do much else than sing – when I was a smol my parents got me the cassette tape for the soundtrack of the classic Ray film Goopy Gyne Bagha Byne soon after we watched it at a festival. At the time I didn’t understand Bangla at all, even so, it very quickly became my favourite cassette tape and I learnt every lyric of every song (however mispronounced and incorrectly – pls forgive me) on the album – yep, without understanding a word of what it meant – that’s the thing with music though right – language doesn’t matter at all, if it moves you it moves you!!”

“A while back on a lazy evening chilling at home singing songs with friends I realised I still remember all of them like they never left my head – here’s a scratchy voiced (warts and all) version of the one I love the most – maybe if I find the courage I’ll sing them all to you – excuse my throat I should’ve warmed up before recording.”

Check out the video posted by Saba Azad:

Reacting to her post, Hrithik Roshan commented, “You are an extraordinary human.” Saba wrote back, “and you are the kindest :)”

The Bengali actress Konkona Sen Sharma wrote in the comments section, “One of my favourite songs! And your pronunciation is fab!”

Some of Saba’s fans were also impressed with her singing. One wrote, “Tooooo good! This is my entire childhood on an LP!”

Another fan commented, “This is such a beautiful childhood memory of mine. You make it sound soulful, Saba.”

Besides being a singer Saba Azad is also an actor. She has worked in films like Dil Kabaddi and the 2011 movie Mujhse Fraaandship Karoge. Saba was also seen in Feels Like Ishq on Netflix. She is currently featured in the web series Rocket Boys.