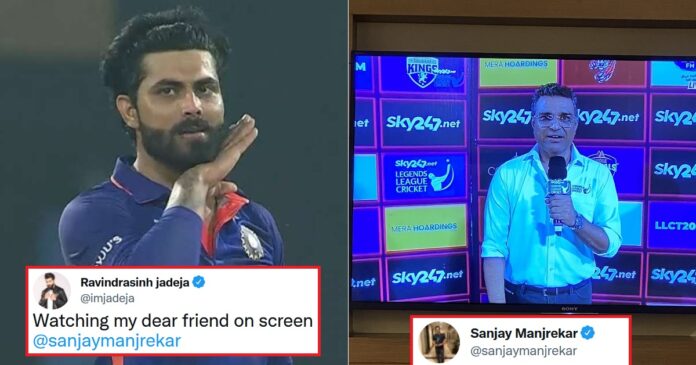 The tussle between Ravindra Jadeja and Sanjay Manjrekar is nothing new for Cricket Fans. Ever since Manjrekar did that ‘bits and pieces’ tweet and Sir Jadeja responded by calling his commentary ‘verbal diarrhoea’, their rivalry has been talk of the town and a renowned meme material for Cricket Fans.

Even when Ravi Jadeja played that near match-winning against New Zealand in World Cup 2019 Semi-Final, he waved his Bat towards the commentary box, particularly aiming at Sanjay and proving a point. Many fans also believed that Sanjay’s harsh yet somewhat constructive (debatable) criticism played a big part in the overall growth of Ravindra Jadeja – the all-rounder. Even though this saying was more of a Meme Material, Jadeja’s number did actually improve after that argument.
It could be a coincidence but the Internet doesn’t spare anyone or anything.

Anyway, now their rivalry seems to have taken a new turn as Ravindra Jadeja tweeted something unexpected yesterday.
Jadeja, who is unable to participate in the ongoing T-20I Series and is out of the T-20 World Cup, tweeted a picture, saying he is watching his ‘dear friend’ on screen.
The ‘dear friend’ on the TV Screen was the Man himself – Sanjay Manjrekar.

Twitter Users went berserk and were amazed at Jaddu’s kind words for Sanjay, even if he didn’t mean it.
Sanjay, too, was polite in his reply and said he’s looking forward to seeing his ‘dear friend’ Jadeja on the field soon.

“Ha ha… and your dear friend looking forward to seeing you on the field soon :)”
Sanjay Manjrekar

Ha ha… and your dear friend looking forward to seeing you on the field soon 🙂 https://t.co/eMpZyZYsYU

This exchange of wholesome (pun intended) tweets was enough to trigger a flurry of Memes from the Cricket Fans. Majority of them had no idea what just happened while some enjoyed it thoroughly. One user wrote ‘Enmity over with Sanjay Manjrekar, now he’s my one and only dear friend’, while another wrote ‘The Crossover Cricketing World didn’t deserve but needed’.

Here are some of the Memes related to the incident to relieve your stress :-

Jadeja & Manjrekar are behaving like those Siblings when mom is back to home! https://t.co/g4iU1Ez83y

Enmity over with Sanjay Manjrekar, now he's my one and only 'dear friend'.https://t.co/cht6174e7h

I'm scared about the day when these two will come together on a podcast and reveal that all this was scripted. 😂😭 https://t.co/THJDDo7oTa

Fans may be celebrating Ravindra Jadeja on Twitter but unfortunately, he won’t be able to weave the same magic on Cricket Field in the T-20 World Cup. He underwent a surgery recently and is out of action for at least another 6 months. And if this wasn’t enough, India will also miss the services of Speedster Jasprit Bumrah.