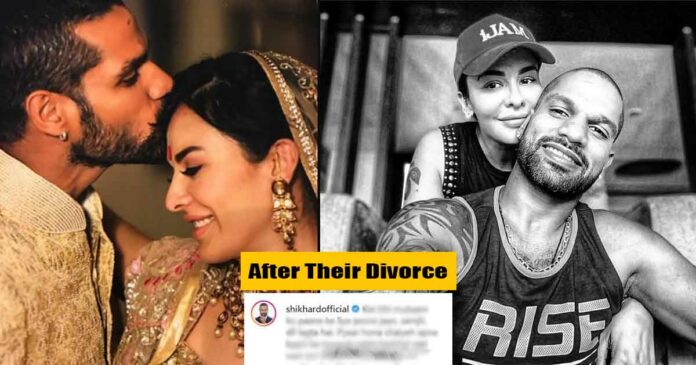 India and Delhi Capitals opener Shikhar Dhawan’s wife Ayesha Mukherjee announced on social media that the couple’s marriage of eight years was over. Dhawan wasn’t too concerned about the storm around his personal life as he is currently in the UAE with the rest of the Delhi Capitals team ahead of the Indian Premier League (IPL) 2021 resumption later this month. Dhawan tried to pat away the issue of his divorce as well, just like his nonchalant batting both for India and DC.

During their limited-overs series against Sri Lanka in July, the Delhi southpaw led the Indian side. As a result, the Dhawan-led side won the ODI series. However, lost a closely-fought T20 series in Lanka.

Before Dhawan’s post, Ayesha made the official announcement of divorce via an Instagram post which started with, “I THOUGHT DIVORCE WAS A DIRTY WORD UNTIL I BECAME A 2 TIME DIVORCEE.” Ayesha said in the post, “Funny how words can have such powerful meanings and associations. I experienced this firsthand as a divorcee. The first time I went through a divorce I was soooooooo f**kn scared. I felt like I had failed and I was doing something so wrong at that time.”

“So now imagine, I have to go through it a second time. Woooahhhhhh. That is terrifying. Being divorced once before already, felt like I had more at stake the second time around. I had more to prove. So when my second marriage broke down it was really scary. All the feelings I felt when I went through it the first time came flooding in. Fear, failure and disappointment x 100,” she went on to write. Later, Ayesha’s Instagram post went on to offer help to all those women who were struggling to cope with separation in their marriage.

Earlier, the Melbourne-based Ayesha was married to an Australian businessman and has two daughters from her previous marriage. Later, she and Dhawan got married in 2012 after getting engaged in 2009. If you don’t know, Ayesha is an amateur kickboxer.

After hearing the divorce of the Indian cricketer, Shikhar Dhawan, and his ex-wife, Ayesha Mukherjee, netizens couldn’t help but share this news on social media. Not just that, they also shared their views regarding the separation of the duo.

Let’s check out some of the reactions by the netizens:

As per an Instagram post put up by Shikhar Dhawan’s wife, Aesha Mukerji, the pair seem to have parted ways after 9 years of marriage.

Waiting for #Modi to tweet on Shikhar Dhawan’s divorce.@narendramodi

These cricketers and BULLYWOOD started following USE AND THROW CONCEPT, Once u r are enough divorce and catch a new one and enjoy

Everyone has FREEDOM OF CHOICE, & as long as they are doing WHAT THEY WISH, we should be happy for them.

I just hope this doesn’t affect his performance.
Although this news was evident long way back#ShikharDhawan #AeshaMukerji

Shikhar Dhawan to his wife with 8 years of marriage. #ShikharDhawan #AeshaMukerji pic.twitter.com/YWu5oz7E2s

Is it due to shikhar’s downfall in recent times. If so its a shame on her part

The ‘modern’-day unions have become more prone to divorces than the yesteryears. The concepts of adjustment, compromise and maturity seem to be missing. We are rearing our generation with the wrong set of ideals. #ShikharDhawan