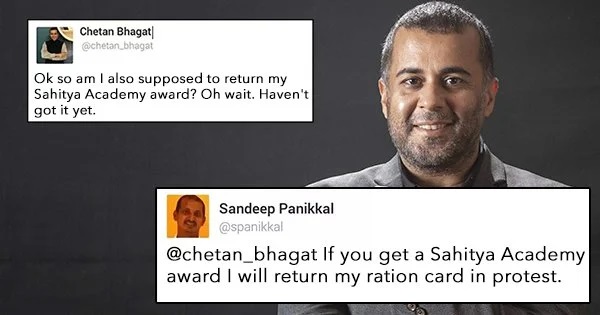 Social Media is a boon and a curse itself. But, when it is not enabling the nazism governments, social media is quite wonderful. Social media has given us so many things over the last few years to cherish or to stifle. But one this is common that it always gives is the mindless fights on the internet. These fights never get old. So, here is the list of social media fights that proves eventually everyone gets owned on the internet. Scroll down to check it out:

1. We all know that Twinkle Khanna is popularly known as “Mrs. Funny Bones”. And as her name goes, she is quite hilarious at times.

2. Piers Morgan is a broadcaster and his takedown on the internet is always hilarious to watch.

@GaryLineker_ I currently air in 200 countries/territories – how you getting on? #SmallPondMinnow

3. Here it is, again Piers Morgan comeback. This time it is with some other feud. Seriously, we do not know who to dig for here.

What a monumental twat this man is. I cannot wait for the day he goes to prison. pic.twitter.com/d3mU6j0mdK

4. This is one of the most random events you are going to witness today.

5. This is literally gross of Flat Earthers.

The cities in the background are approx. 16miles apart… where is the curve ? please explain this pic.twitter.com/YCJVBdOWX7

6. Have you ever imagined living in a first-world country with amazing facilities and education but still being stupid? Stupidity is contagious. So, beware!

7. Sexist people noticeably lack good comeback. Have you ever noticed it? Then take a look.

8. Do you remember when millions of people stomping the Capital in the United States due to Donald Trump who lost the elections? Well, if you don’t know, Ted Cruz is the one who is responsible for it.

9. While Donald Trump and Chrissy Teigen never really take it to another level, but they have been going on with each other for years now. Unfortunately, most of their conversations were destroyed forever after Trump’s Twitter account was suspended by Twitter.

10. Have you ever seen airlines beefing it out on Twitter? Well, this is new. For background, this was in the early days of the Corona Virus pandemic when all of the airlines had to stand on the ground, but IndiGo was still flying.

11. Whoaaa! This one is hilarious. Karan Johar kills this one.

12. Once, Reddit found an image of the Flipkart office that has a Carton with an Amazon label on it.

13. This doesn’t make much sense. As compared to what you ask?

14. While Thomas was sexist, Lorde is perfect for that hilarious comeback.

Someone should make a kickstarter to get taylor swift a booty

15. Rihanna is a legend and her comeback is quite amazing.

Dear Rihanna, you’ve gone a little too far with this ‘outfit’ http://t.co/zSKETVkk May be time to class it up and put some clothes on?

16. Finally, someone is taking a dig at BCCI. Wonderful

17. Did anybody know, Ranvir Shorey has a popular father? LOL

18. This is equal to hitting someone hard on the face.

19. Grudging acknowledgment of the truth. Hilarious.

20. Poor, Chetan Bhagat. We would never understand why he tries to be funny? Ever.