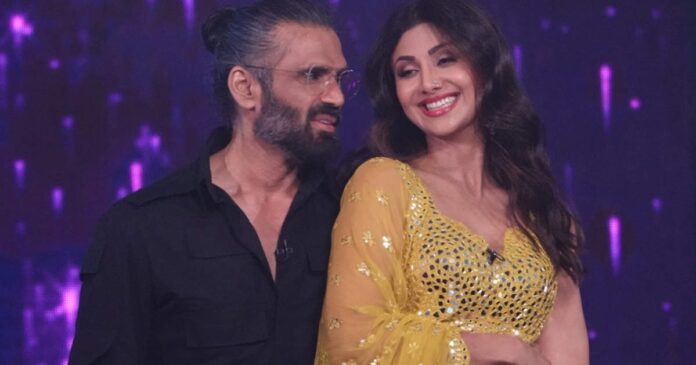 The Indian actress Shilpa Shetty, the fitness queen of Bollywood, recently celebrated her 47th birthday. Her day was made special as her fans, friends, and family gave her heartfelt wishes. Among the many co-stars who greeted her on her big day, the ‘Dhadkan’ actor Suniel Shetty’s birthday post grabbed the most attention.

The iconic 2000 film ‘Dhadkan’ which starred Mahima Chaudhry and Akshay Kumar in lead roles other than Shilpa Shetty and Suniel Shetty is still on our minds for its super hit songs. The film was directed by Dharmesh Darshan, and the music director duo Nadeem-Shravan did an amazing job.

Suniel Shetty took to his Twitter and shared a lovely throwback selfie of himself with Shilpa Shetty as he wished the actress on her birthday. Sharing the lovely photo the actor also left a message for his ‘Dhadkan’ co-star, Anjali (Shilpa Shetty).

The actor looked dapper in the olive green attire he is wearing in the picture while Shilpa looked stunning in her bright yellow traditional outfit. In his tweet, Suniel wrote,

Suniel’s birthday wish stirred the internet because he used the iconic dialogue in the film ‘Dhadkan’, “Main tumhe bhool jaon yeh ho nahi sakta … aur tum mujhe bhool jao yeh main hone nahi doonga.” This dialogue and the romantic drama was a blockbuster hit but its songs have a separate fan base.

Suniel Shetty’s tweet was followed by several replies from fans:

Well, on the work front, Shilpa will next be seen alongside Abhimanyu Dassani and Shirley Setia in Shabbir Khan’s ‘Nikamma’ which will finally hit the theatres on June 17, 2022, after a long wait. So, Shilpa is ready to get back into movies apart from appearing as a judge in a number of dance and talent reality TV shows.

Apart from this, she will also make her OTT debut with Rohit Shetty’s ‘Indian Police Force’. The series also stars Sidharth Malhotra where he will be playing a Delhi Police officer.