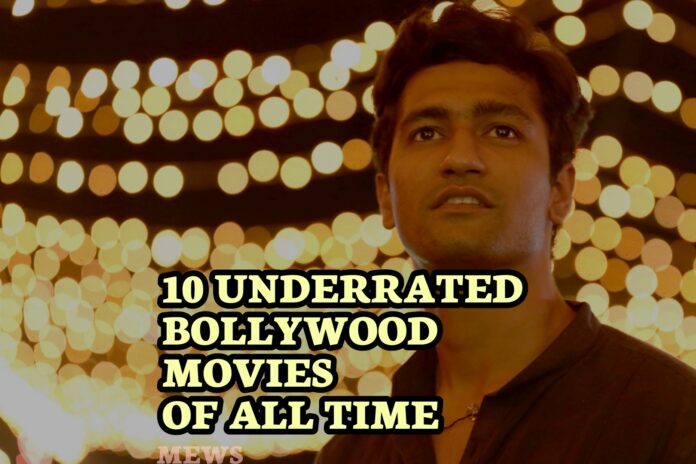 When it comes to movies, everyone has a list of personal favorites. However, there are a lot of great films that never get appreciated by audiences for one reason or another. The Lunch Box is one of those underrated gems from our perspective. A “flaw” in delivering the lunch box leads to a peculiar bond between Saajan (Irrfan Khan) and Ila (Nimrat Kaur).

If you’re looking for an underrated Bollywood movie, it doesn’t get much better than Vicky Donor. This rags-to-riches comedy is a thought-provoking look at sperm donation and how it can affect a person’s life in ways they never expected. No matter what age you are, I promise that Vicky Donor will make you laugh your ass off.

This 2010 film, directed by Vikramaditya Motwane and starring Rajat Barmecha and Ronit Roy, is about a young boy who runs away from home to follow his dreams. Filmed in beautiful locations in Rajasthan, it has an art-house feel that’s quite similar to Italian neorealism. Udaan was chosen as India’s official entry for Best Foreign Language Film at the 83rd Academy Awards. One of the best-underrated Bollywood movies out there for sure.

If you were to tell me before I saw Swades that it would be a top underrated Bollywood movie, I’d look at you like you had three heads. But here we are.

A terrifying example of why folklore is never meant to be shown on screen, Tumbbad is a movie that introduces us to an ordinary family living in one of India’s poorest regions. An epic mythological tale mixed with horrific human emotions, Tumbbad takes our breath away as we watch its main character grow older while his quest for power worsens. With no shortage of fear-inducing moments or spectacular and colorful set pieces, Tumbbad is a perfectly underrated Bollywood movie that you must absolutely watch.

Deeply emotional and intensely powerful, Aligarh tells a love story in which no one is a victim, no one is a martyr and all decisions are rational ones. Aligarh takes you on an intense journey of human emotions and what it means to be different in a world that refuses to accept difference. The top underrated Bollywood movies list would be incomplete without mentioning Aligarh.

7. Rocket Singh – Salesman of the Year

This satirical comedy highlights why employees aren’t putting in their best efforts. Set against a backdrop of disinterested management, Rocket Singh is a fictitious film that draws parallels to Indian bureaucracy and posits how to change things for the better. While fictional, it’s not far from reality. The movie is still funny, even if your office isn’t exactly like it. If you watch just one underrated Bollywood movie on our list, make it Rocket Singh – Salesman of The Year.

Newton is an underrated Bollywood movie you need to watch if you’re a fan of thought-provoking and intelligent movies. Movies which you can’t afford to miss watching while in India. The movie stars a few of our favorite Bollywood actors like Rajkummar Rao, Pankaj Tripathi, Sanjay Mishra, Raghubir Yadav, Anjali Patil, etc. If you ask us why we suggest Newton for underrated Bollywood movies then it’s because despite being a fairly recent one (Released on January 9th, 2017), Newton is one of those films that has failed to leave an impact among viewers.

Director Neeraj Ghaywan’s 2015 romantic drama tells a gut-wrenching story of a young couple struggling with the social stigma. This award-winning film was inspired by real-life incidents that took place in North India and highlight issues of caste and class. Featuring some amazing cinematography and an incredible performance by newcomer Vicky Kaushal, Masaan is often considered to be one of the most underrated Bollywood movies of all time. It even made it to TIME magazine’s list of top 10 must-watch Bollywood films. If you haven’t seen it yet, do check it out!

Hindi cinema is one of the biggest in the world, and India produces movies at an astonishing rate. It’s hard to keep up with all of them, especially if you aren’t living in the country itself or familiar with the culture. With this list of underrated Bollywood movies of all time, we offered you the chance to find some great titles that will entertain you and let you learn more about Hindi cinema at the same time.

New And Upcoming Bollywood Movies Based On Real Life Stories