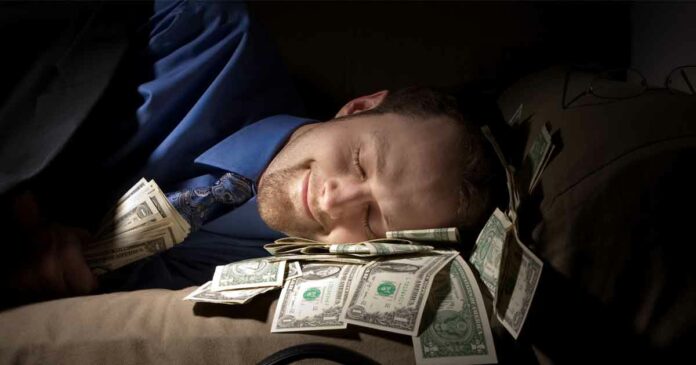 Do you think it is easy to become a millionaire and that too overnight? People spend their whole lives trying out their luck and working hard in an attempt to earn that extra hard money to make a decent living. However, when it comes to making easy money, few people are just lucky. They have turned into overnight millionaires thanks to their unique skills or just luck.

In just 8 hours, a 26-year-old man made Rs. 11.6 lakhs in one day and that too by doing the thing which is anything but hard work. He did it by simply lying in his bed and trying to get some decent sleep. Sounds too good to be true, right?

According to a TNN report, a Twitch streamer in a period of eight hours has earned $16,000 (Rs 11.6 lakh) by streaming his sleep time and allowing audiences to try and wake him up after donating money. His viewers loved this weird challenge of waking him up and donated benevolently. That Twitch streamer goes by the name Asian Andy.

During the live stream, Andy set up text-to-speech recognition for messages. So that messages were being read out loud and after each donation, music was being played. While he sleeps in an attempt to wake him, he let his fans send him messages and sounds, by having the money donated.

A lot of people instructed Alexa to imitate a dog barking, set up his alarm, send him funny messages, or play blasting music. Many viewers also tried to scare him off by telling Andy that someone was at the window next to his bed, but he didn’t bother at all about it and that led to some hilarious reactions from the viewers.

Although he failed to get a decent sleep, Andy remained cuddled up with his dog for most of the live stream and made a huge amount of money just by tossing and turning in bed for 8 hours. The agenda was very simple. Andy would sleep and the viewers would try to wake him up.

Do you know what is a Twitch? It is a live streaming gaming service that is designed for streaming games. However, this man found a very creative way to use it and make some easy cash in a short span of time. He just let his viewers donate money to send text-to-speech messages and sounds while streaming. Isn’t it amazing?

He posted on YouTube, “I’m just trying to sleep. You’re gonna scare the viewers. Because I’m just going to be asleep anyway. I won’t know what’s going on. The door’s locked.”

The real name of Asian Andy is Steven. He was born in Vietnam and is currently living in Los Angeles, California. He has more than 1 million subscribers on his YouTube channel. This challenge video which he posted on his channel gained more than 4 million views.

Among other YouTube influencers, Sleep Stream’ is a trend gaining popularity. Another gamer was paid last year to let his audience watch him nap when he fell asleep in the middle of a gaming session.

In fact, it is said that if you want to be rich then you should make money while you sleep. Yes, that’s possible. Just a few moments earlier we heard about this man who made money while sleeping. But did you know this is a common practice among the rich on this planet.

Well, the rich obviously don’t make money by streaming their sleep time but they have a setup that helps them become rich even when they are asleep. Consider any big business, it doesn’t require the 100% involvement of their owner always. And that is how they do it. They make systems or businesses that will run and make money even when they are sleeping.

Normally, people prefer jobs and plan a life where they are the sole being responsible for their earning. Rathe, to be rich you need to make people work for you. So not only by streaming your sleep, there are many other ways by which you can earn money while you are asleep.

It may sound odd but everyone just wants to be rich, but very few people know how to be rich. If you want to be rich then no doubt you should be motivated, hard-working, and more. But you should also have a plan where you know what to earn huge.

Involve more people and create a self-sustaining system because only passive income can make you rich. So strive hard and learn more and once you know how to do it, give your best. And in case, if you fail to earn a few bucks by hard work, then you can always try streaming your sleep! Maybe that could help.