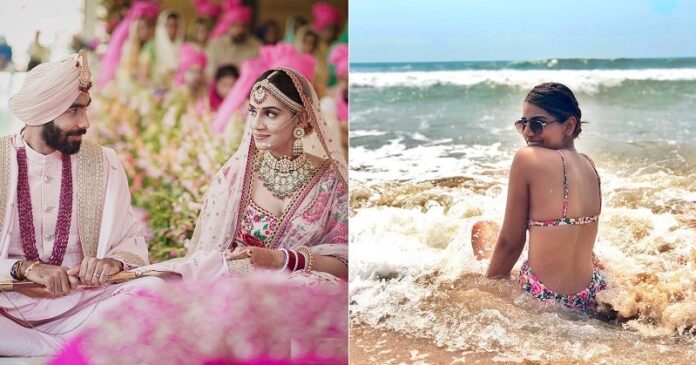 India’s number one bowler Jasprit Bumrah has dominated with his lethal pace worldwide. Meanwhile, he gets set for a brand new chapter in his life with Sanjana Ganesan as he finally ties the knot with her. The news finally broke out after the after days of rumor as Bumrah revealed the same on his social media handles.

Reportedly, After the third Test Match against England, Jasprit Bumrah taking leave from the Indian side due to personal reasons got all talking. However, it came in the news that the bowler asked for few days off because he is getting married.

In an interview with ANI, sources in the BCCI have confirmed that Bumrah is all prepared to get married soon and that is why he has taken a leave to prepare for the ceremony. The source said, “He informed the BCCI that he is getting married and has taken the leave to help in preparations for the big day.” Netizens jumped to speculate soon after this news broke out that who the pacer would be tieing the knot with.

However, on March 14-15 in Goa, a popular sports anchor started doing the rounds that the Indian fast bowler was all set to tie the knot with Sanjana Ganesan. It rumor quickly hiped after the rumor with Anupama Parameswaran.

The developments surrounding his personal life were doing the talks, even though the speedster has never opened up on his personal relationship. However, a lot of suspense remains on their wedding. Reportedly, a few unconfirmed the engagement and have stated that the couple would be entering into marriage this weekend.

After making fans assume and talk for days about which girl was the Indian bowler going to get married to, Jasprit Bumrah finally ended all speculations as he got married to Sanjana Ganesan on Monday (March 15) in Goa.

Social media is blown up by their loved ones following marriage. Many teammates of Bumarh along with the International Cricket Council and Board of Control for Cricket in India, congratulated the couple on the same. Let’s check out:

Best wishes for a wonderful life together! https://t.co/go7ELMkPJM

Many congratulations on the start of this beautiful journey. Wishing you both a lifetime of happiness.❤️ https://t.co/MdkdKbwFjj

Reportedly, Bumrah decided to opt-out of the fourth and final Test and also the ongoing T20I series against England. He wouldn’t be part of the ODI series too. India had won the Test and enter the final of the World Test Championship.