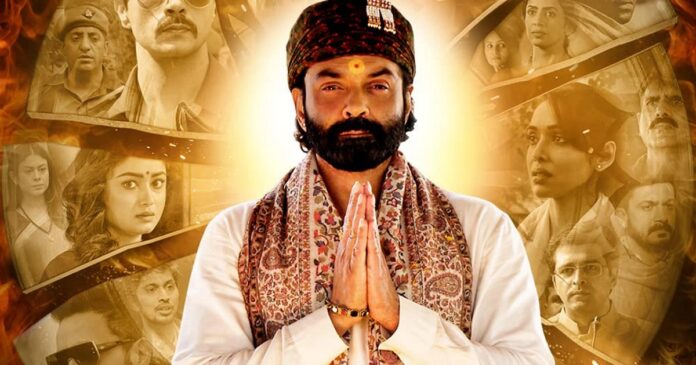 The shocking fees of the actors for Aashram 3!

The most anticipated series of the year is Prakash Jha’s Aashram 3. The first and second seasons of the series have been loved by all and the third installment of Aashram was just released on June 3 on the OTT platform MX Player. The cast of the series includes Bobby Deol, Esha Gupta, Chandan Roy Sanyal, Darshan Kumaar, Aaditi Pohankar, and Tridha Choudhury in important roles.

The series received critical acclaim and revolves around Guru Ji at an Aashram who is admired by the common as well as rich people of the region. The series brings forward how people are conned by the gurujis in the name of belief.

Here’s how much fees these actors charged for Aashram 3:

Miss India International title of 2007, Actress Esha Gupta starred in a number of Bollywood films including Jannat 2, Chakravyuh, Raaz 3D, Baadshaho, and Rustom. Esha has reportedly charged Rs. 25 lakhs-2 crores for her role in the series streaming on MX Player.

The Bengali Indian Actress Tridha Choudhury has reportedly charged Rs. 4 lakhs to Rs. 10 lakhs for her role in Aashram. She was also featured in the popular web series on Amazon Prime Bandish Bandits.

Actor Chandan Roy Sanyal has apparently charged between Rs. 15 lakhs to Rs. 25 lakhs for playing the role of Nirala’s best friend in the series. He has garnered praise for his supporting roles in Rang de Basanti, and Kaminey.

Actor Darshan Kumar made his debut with the film Mary Kom, as the main lead opposite Priyanka Chopra. He was also featured in the film Tere Naam with Salman Khan. Darshan Kumar reportedly charged Rs. 15 lakhs-Rs. 25 lakhs for his role in Aashram.

Actor Tushar Pandey graduated from the National School of Drama, he played the role of Mummy in the film Chhichhore. He has reportedly charged Rs. Rs. 25 lakhs – Rs. 35 lakhs for the role in MX Player’s Aashram.

Actress Aaditi Pohankar is best known for her roles in the Hindi web series She and Aashram. She plays the role of Pammi in the series and apparently took home Rs. 12 lakhs to Rs. 20 lakhs for playing the character.

Goenka starred in some of the highest-grossing Indian films of all time like Tiger Zinda Hai (2017), War (2019), and Padmaavat (2018). She debuted with the web series Stories by Rabindranath Tagore and also appeared in a number of successful series like Abhay, Sacred Games, Criminal Justice, Aashram, Asur: Welcome to Your Dark Side, and Criminal Justice: Behind Closed Doors. She reportedly charged Rs. 8 lakhs to Rs. 15 lakhs for her role in Aashram.

The Bollywood star who acted in several Bollywood movies including Barsaat, Gupt: The Hidden Truth, Soldier, Humraaz, Dostana, Race 3, Yamla Pagla Deewana, Class Of ’83, and many more. Actor Bobby Deol will play the role of Nirala in Aashram 3 for which he reportedly charged Rs. 1 crore – Rs. 4 crores for his character.

Check out the Trailer of Aashram Season 3: