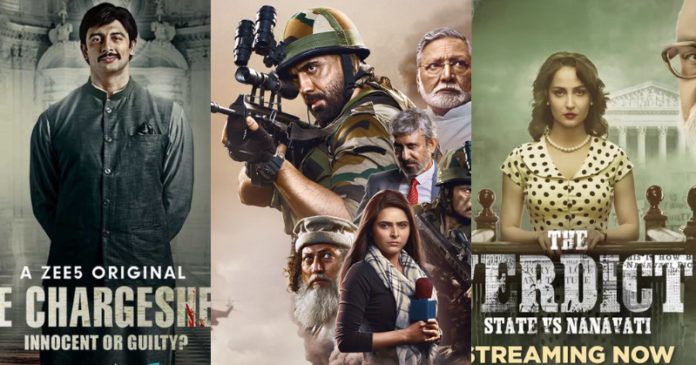 OTT platforms are streaming some excellent shows from a number of genres recently. From drama and thrillers to comedy and action there are numerous shows to choose from while surfing the websites. Apart from these the series and TV shows that have been quite popular among the audience are Docudramas (documentary dramas). Documentary dramas are based on real-life events and facts. There are a few Indian web series based on real-life events that are a must-watch. The web series in Hindi will not only entertain you but also inform you about past events.

Here are some of the best web series based on true stories that you shouldn’t miss. So get your subscriptions if you haven’t already and stream them now!

An action thriller based on multiple terror attacks that India witnessed from Parliament Attack to 26/11. This intelligence thriller has an engaging plot and features Kay Kay Menon in the lead role.

Where to watch: Disney+Hotstar

This gripping series is based on real-life events of the Mumbai attacks that took place in 2008. The story revolves around the challenges faced by the staff of Bombay General Hospital and the struggles of a journalist who tries to report all the incidents taking place on that fateful day. The criminal web series Hindi features Konkona Sen Sharma and Mohit Raina, this Hindi action web series is a must-watch.

This Indian web series based on real life events follows the life of Harshad Mehta, a stockbroker who led the stock market to flying heights before collapsing. It was set in Bombay in the 1980s and 1990s. One of the best web series based on true story, this show will keep you hooked to your television screens. The actor Pratik Gandhi, reportedly gained 18 kilograms to fit into the lead role.

Where to watch: Sony Liv

One of the series based on true stories on Netflix in Hindi is based on the infamous Nirbhaya gang rape case that stirred the entire country in 2012. This criminal web series Hindi is thrilling and horrific enough to give you goosebumps. The series features Rasika Dugal, Shefali Shah, and Adil Hussain in the lead roles. The show retells the events and investigations that took place after the inhuman and dreadful incident.

This real story based web series on zee5 is about Shehnaz Parveen’s life story. The story follows a Pakistani lady by the name of Kainaaz Akhtar, who is imprisoned on suspicion of being a militant as she ends up on the Indian side of the Line-of-Control (LOC). Kainaaz gives birth to a child while imprisoned for seven years. An Indian journalist strives to bring justice to Kainaaz and her daughter.

it is a courtroom drama that revolves around a murder case where a businessman is shot dead by a decorated naval officer for having extra-marital affair with his wife. The story revolves around the scandalous KM Nanavati Vs State of Maharashtra case from 1959. This desi real web series features Sumeet Vyas, Makarand Deshpande, Manav Kaul, and Saurabh Shukla.

Where to watch: ALT Balaji, Zee5

The real life incidents covered in this story are the death of a militant leader, Bilawal Wani, and the incidents that followed including Pakistan’s involvement in cross-border attacks, the functioning of militant and terrorist groups in Jammu and Kashmir, international pressure, the domestic bureaucratic situation, and how journalists play a role in everything. Based on 2016’s URI attack, this is one of the best web series based on true story which also showcases the weapons that were used in the cross-border strikes like Galils, M4A1s, TAR-21s, etc.

Where to watch: Sony Liv

Based on true events about the soldiers in the Indian National Army (INA) led by Subhash Chandra Bose, this web series in Hindi is directed by filmmaker Kabir Khan. The show features Sunny Kaushal, Rajvir Chauhan, and Sharvari Wagh. Set in two different periods – from 1942 to 1945 and when INA was formed in 1996. During WWII, Indian National Army (INA) was formed by Indian troops who defected to the Imperial Japanese Army.

Jamtara is another real life web series on Netflix, it is based on the true events around the phishing rackets that take place in the Jamtara district of Jharkhand. This binge-worthy crime drama stars Dibyendu Bhattacharya, Amit Sial, Aksha Pardasany, and Sparsh Srivastav.

Also Read: Most Awaited Web Series Releasing in June 2022 To Watch On OTT

Featuring Sikandar Kher and Arunoday Singh in the lead roles, this real story based web series on Zee5 is inspired by the murder case of a seven-time national badminton champion from the 80s. The champion was shot outside the stadium. This attention-grabbing and thrilling web series will give you the chills.

So, what are you waiting for? Grab your popcorn and sort out your weekend by picking one of these amazing Indian web series to watch on the streaming websites.