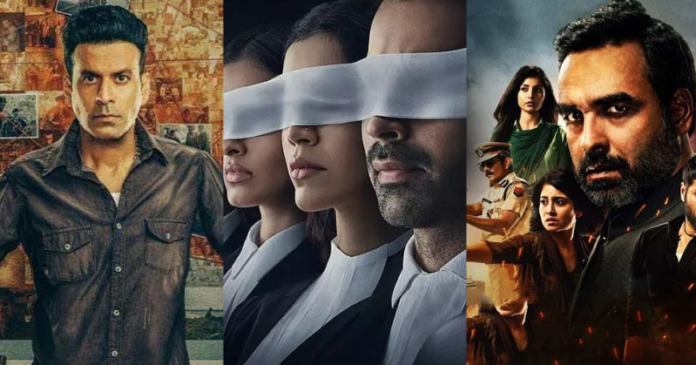 With the announcement of a slew of fascinating new projects, Amazon Prime Video has raised the standard in terms of OTT programming. Some of the best web series and movies ever made in India may be found on this OTT platform. Mirzapur, The Family Man, Paatal Lok, and Four More Shots Please have all been renewed for a second season. Amazon Prime Video has content in every genre, so they know what their customers want in terms of entertainment. Guilty Minds, a law drama, was shown to the audience. We’ve compiled a list of upcoming Amazon Prime Web shows that will premiere in 2022.

There are several new web series aimed at amusing viewers. Let’s take a look at some of the forthcoming Web series that you should watch in 2022.

Let’s take a look at the upcoming web series on Amazon Prime Video this year,

A new web series on amazon prime, Modern Love  Mumbai delves into six distinct yet universal stories of human connection and love in all forms, including romantic, platonic, parental, sexual, familial, marital, and self-love. Based on the popular New York Times column, this reprint of the highly successful original book of the same name explores love in all of its confusing and wonderful forms against the backdrop of Mumbai, the city of dreams.

The fate of a group of young girls imprisoned on a remote island hangs in the balance following the shocking discovery that what is happening to them is an elaborate social experiment. With the entrance of additional test subjects — a new island of adolescent boys – who must also fight for survival while being watched over by the experiment’s puppet master, Season 2 ramps up the drama and keeps you guessing.

Following the cold case and contentious inquiry into Beverly Lynn Smith’s murder. In the industrial city of Oshawa, Ontario, Beverly Lynn Smith, her husband, and their 10-month-old baby lived in a remote farmhouse. She was assassinated in her kitchen on December 9, 1974. It is one of the new web series of Amazon Prime.

Lovestruck High is a teen movie-style US high school that gives UK singletons a chance at love. In Prime Video’s new dating show, Lovestruck High, a varied bunch of singles return to school in the hopes of finding ‘the one.’ But this isn’t your typical British comprehensive – this is Lovestruck High, which is based on the high schools featured in our favourite teen films.

Abhishek, an engineer, is unable to locate work that is suitable for his skills. As a result, he ends up working for a panchayat in a remote Indian village, where he encounters a range of everyday challenges. As Abhishek settles in, a rival to Pradhan Ji emerges in the village, and village politics in Phulera heats up. This new web series on Amazon Prime got a lot of positive reviews and is a must-watch.

Kashaf Quaze and Deepak Rana are law school friends who are almost but never quite lovers. They usually wind up on different sides of the law. While the idealistic Kashaf is pursuing public interest lawsuits, the ruthlessly ambitious rising star is pursuing his agenda. Take a sneak peek into one of the new upcoming web series on Amazon Prime.

Deepak is a partner at a prestigious law firm that specialises in representing large corporations. Deepak’s new junior and the firm’s heiress, Shubhangi Khanna, is attracted to him, adding fuel to the fire. Shubhangi’s insecure and competitive relative, Shubhrat Khanna, wants Deepak out of the company. This is one of the best web series on Amazon Prime in Hindi.

Tara Khanna and Karan Mehra decide to launch “Made in Heaven,” a wedding planning company aimed at the city’s ultra-wealthy families. As their company expands and they move from client to client, they learn a few things about the rich’s wedding seclusion. Khanna and Mehra go above and above for their clients in every instance. It is one of the best web series on Amazon Prime Hindi.

From the strange ritual of marrying a tree before the actual wedding to the patriarchal need for the brides’ virginity test, the series delves into the complications that govern huge fat Indian weddings. It also glosses over the conflict between modern thinking and old morals.

Things are heating up in Mirzapur, where a power struggle is pushing everyone to their limits. After the wedding massacre, Akhandanand Tripathi and his son Munna are now focused on expanding their reach and power. They are, however, unaware that their opponents, Guddu and Bablu, are still alive and ready to ambush their next move. Look out for this new web series on Amazon Prime 2022.

The Family Man is a web series on Amazon Prime in Hindi. In season 2 we saw that Srikant Tiwari leaves T.A.S.C. for a typical 9-5 job in the IT industry. When he learns of a planned attack by the Sri Lankan Tamils, he doesn’t waste any time quitting his current soul-sucking employment and returning to the agency. In season 3,  Srikant Tiwari embarks on yet another roller coaster journey, attempting to strike a balance between his life as a common guy and a top-secret spy facing terrorists, rebels, and moral ambiguities. The Family Man Season 3 is a new web series on amazon prime in Hindi.

Four girlfriends — Damini, Siddhi Patel, Anjana Menon, and Umang Singh — are still navigating the obstacles that their modern, independent lives throw at them, albeit individually. They decide to get together to check up on each other’s love and professional lives, which are ever blossoming yet messy. They have their fair share of problems and anxiety as they navigate work, love, and aspirations. One of the most anticipated new Hindi web series on amazon prime 2022.