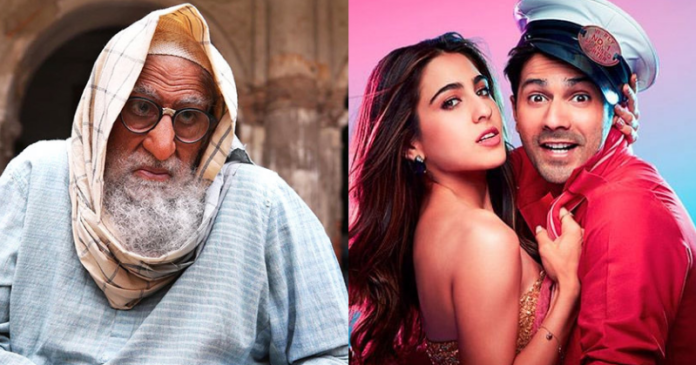 So, here is a list of the Latest Bollywood Comedy Movies on Amazon Prime that you should watch right now!

Chhalaang has a hilarious, yet realistic plot where Montu is a PT teacher of a semi-govt school who is not so serious about his job. But when everything he cares for, his job, the love of his life is at stake, he starts to take things seriously. Will he be able to save his job and his love, Neelu? You should definitely watch this comedy movie in Hindi to know more. It is a must-watch film and you should look out for Rajkumar Rao’s brilliant performance.

This is one of the hilarious comedy movies Amazon Prime has to offer. The story revolves around a young guy who delivers pizza, things change for him when he is assigned the task of transporting a gorilla from Mumbai to Diu. Watch this movie if you want to know the gorilla with him is a real one or a fraudster and what happens when he encounters a real gorilla. The film has a captivating climax and the director has done a very good job.

Among the comedy movies, latest Bollywood movie that you can watch on amazon prime is Velle. The story revolves around some carefree high school friends. A runaway girl, her three best friends, three criminals, and a few others cross paths after an incident. Will they come off as responsible and better kids for it or worse? The plot is hilarious with some good dialogues. The music and the performance of the actors is really good, Anya Singh has done well as Riya, and Karan Deol has improved a lot compared to his debut performance in Pal Pal Dil Ke Paas.

This movie is a little different from the mainstream Bollywood cinema so if you are bored of watching mainstream movies you should watch this one on Prime. This movie explores LGBTQ relationships which is a hush-hush topic as same-sex love is not explored much in Indian films. The plot revolves around two men Aman and Kartik, they fall in love with each other but their love story takes a bumpy ride when they face opposition from Aman’s family and society. Will they have their happy ending? watch this romantic comedy on amazon prime to know more.

You should also lookout for the amazing performances of Ayushmann Khurrana and Jitendra Kumar, The Viral Fever star.

This comedy movie on Amazon Prime has a hilarious and entertaining plot with a social satire. The story revolves around two peculiar individuals Mirza, played by Amitabh Bachchan, and Baankey, played by Ayushmann. Mirza is an old man who is at odds with his young tenant Baankey who never pays the rent on time. The chemistry between the landlord and the tenant is hilarious. Will Mirza be able to evict Baankey from his property? Watch the movie now to know more. The performance of Amitabh Bachchan and Ayushmann is brilliant and Juhi Chaturvedi is a very good writer.

Also Read: 20 All Time Best & Old Bollywood Comedy Movies You Must Watch in 2022

When a matchmaker, Pandit Jai Kishen is insulted by a rich businessman, Jeffrey Rozario, he seeks revenge by getting a Coolie or porter who poses as a millionaire married to Rozario’s daughter. You should watch this hilarious comedy by David Dhawan to check out what happens when Rozario finds out the truth. It is a remake of the 1995 blockbuster starring Govinda. Varun Dhawan stepped into Govinda’s shoes in this comedy movie. We have some good comedians in this movie who can make you laugh like Jonny Lever, Paresh Rawal, Jaaved Jaafferi, and Rajpal Yadav.

The story of a grandmother who wakes up after being in a coma for 30 years and the struggle of the dysfunctional family to recreate the 1980s because the doctor advised them to do so to prevent her from getting further shocks. The name is Doordarshan because in the late 80s the only channel on the TV was Doordarshan. The plot is engaging, funny, and entertaining. This movie is a family entertainer, you should definitely go for it.

The life of a 40-year-old womanizer, played by Saif who stays in London turns upside down when he finds out that he has a young daughter named Tia, who he was unaware of. Things take a different turn when he has to change his way of living. The film has situational comedy and funny one-liners. You will enjoy the performances of eminent actors like Saif and Tabu.

This rom-com stars Diljit as a single father, Yenkey, who gets rejected by women because he has a kid, Honsla. When he meets a woman, Jasmine at the airport and falls in love with her he lies about his son which leads to a number of funny and emotional moments. Watch this smart comedy with a brilliant performance by Diljit Dosanjh. It is also his debut as a producer. This makes it to the comedy movies Bollywood list.

This is a remake of the 2005 hit Bunty Aur Babli. The story follows the journey of two ex-con artists Bunty and Babli played by Saif and Rani who decide to get back on track just to find the young couple Kunal (Siddhant Chaturvedi) and Sonia (Sharvari Wagh) who are scamming people by using their names. Will the real ones be able to clear their name? watch this movie to know more. Though the movie got a mixed response from the audience the plot is catchy, entertaining, and hilarious at times. If you are into comedy movies in Hindi don’t miss this one.