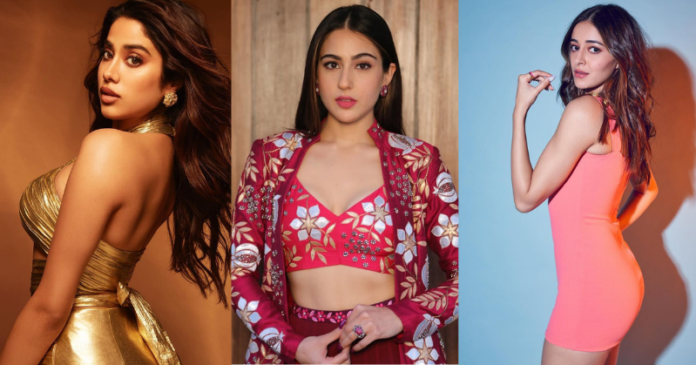 Many gorgeous young actresses in Bollywood enter every year to demonstrate their acting abilities, but only a small percentage of them succeed. It’s fair to say that breaking into this multimillion-dollar sector is never easy. Many skilled and attractive actresses have recently broken into the entertainment sector. If you’re a Bollywood fan, you’re probably curious about the hottest actresses in the industry. If so, you’ve come to the right place!

Ananya Panday is the youngest Bollywood actress of the contemporary era in 2022, both in terms of age and beauty. She was born in Mumbai, India, on October 30, 1998. Chunky Pandey, a veteran Bollywood actor, is her father. Ananya Panay’s Bollywood career began with the mega-popular film Student of the Year 2.

Janhvi Kapoor is the daughter of Sridevi and Bony Kapoor, the famous actress and filmmaker. As a result, she is regarded as one of Bollywood’s top ten most beautiful daughters. She was born in Mumbai in March 1997 and made her Bollywood debut with the film Dhadak in 2018.

She studied acting and drama at the Lee Strasberg Theater & Film Institute in Los Angeles before moving to Bollywood. Janhvi is a true youth favorite since she is the hot youngest actress in Bollywood who continues to grow in beauty with each film. She is now largely regarded as one of the most gorgeous young Bollywood actors of the present.

Sara Ali Khan is the daughter of Saif Ali Khan and Amrita Singh, both actors. She was born in Mumbai on August 12, 1995. She is also one of the youngest Bollywood actor. Her Bollywood debut came with the phenomenally successful love drama Kedarnath. Following this film, she was cast in the Simmba film alongside Ranveer Singh. Without a doubt, she is the latest youth sensation and one of the hottest young Bollywood actors of the year 2022.

Tara Sutaria is one of the new and youthful Bollywood young actresses who will debut in 2022. She was born in Mumbai, India, on November 19, 1995. She worked as a young performer on Disney India’s Big Bada Boom before making her Bollywood debut. She has also appeared in the television shows The Suite Life of Karan & Kabir and Oye Jassie.

Her cinematic career began in 2019 with the highly hit Bollywood flick Student of the Year 2. In 2019, she also appeared in the Hindi love film Marjaavaan. Meanwhile, she is a stunning young Bollywood actress who has only recently started her career.

Niddhi Agerwal is ranked fifth on the list of the most beautiful young Bollywood actresses. She was born in Hyderabad in August 1993 and attended Vidyashilp Academy for her education. Nidhi Agerwal made her Bollywood debut with the film Munna Michael, followed by roles in Telugu films such as Savyasachi and Mr. Majnu. She was also a finalist in the Yamaha Fascino Miss Diva 2014 competition. She is now working on the Hindi film Ikka and the Telugu film I-Smart Shankar. Niddhi Agerwal is a 25-year-old young actress who is never far behind when it comes to Bollywood’s sexiest and most gorgeous young actresses.

Alia Bhatt is without a doubt one of Bollywood’s hottest young actresses and one of the most versatile young actresses today. Mahesh Bhatt and Soni Razdan welcomed her into the world in March 1993. Alia began her career in Hollywood at an early age, making her debut as a child actress in the 1999 film Sangharsh. In 2012, she received her first leading role in Bollywood in the film Student of the Year. She has now risen to become one of Bollywood’s highest-paid actresses.

In the list of Bollywood’s most gorgeous young actresses, Athiya Shetty deserves to be ranked seventh. She was born in Mumbai on November 5, 1992, to prominent actor Sunil Shetty and his wife Mana Shetty. She attended Cathedral and John Connon Schools before transferring to the American School of Bombay.

Kiara Advani is one of Bollywood’s most promising and gorgeous young actresses nowadays. Jagdeep Advani gave birth to her in July 1992.

Kiara began her Bollywood career in 2014 with the comedy-drama film Fugly, and since then, she has worked on a number of popular films, including MS Dhoni: The Untold Story, Machine, and Lust Stories. Kabir Singh, Good News, and Kalank are some of her films that you can watch.

In 2022, Rhea Chakraborty is one of the most promising and gorgeous Bollywood actors. She was born in Bangalore, India, in July 1992 to a Bengali family. She began her education at the Army Public School in Ambala.

She worked as a VJ on MTV India before entering Bollywood. With the popular film Mere Dad Ki Maruti, directed by Ashima Chibber, she made her Bollywood debut.

Disha Patani is another of Bollywood’s newest and most popular actresses. She was born in Bareilly, Uttar Pradesh, in June 1992. Mr. Jagdeesh Singh Patani (DSP in the UP police department) and her mother, Khushboo Patani, are her parents.

Her first film was Loafer, which she made in Telugu before moving to Bollywood. Dhoni: The Untold Story was her Bollywood debut. She also appeared in films such as Welcome to New York, Baaghi 2, and others.

So, on the list of Top 10 young Bollywood actresses in 2022 we have