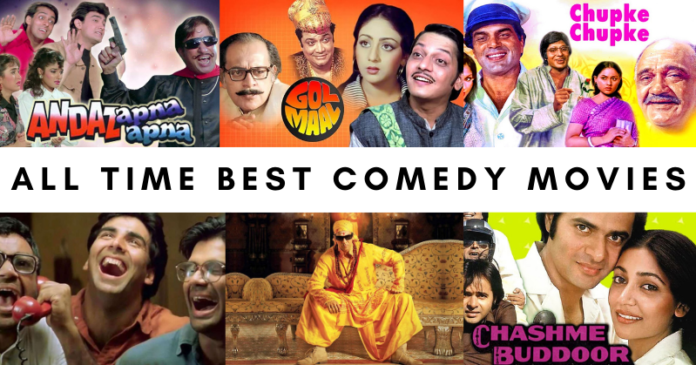 In India, comedy films are referred to as “family flicks.” There are no points for guessing how well they do at the box office. So much so that love and comedy films were evenly distributed at the box office. While today’s Bollywood comedy movies generally do not have much of a storyline, several classics from the past had perfect plot lines.

So, here are the 20 all-time best Bollywood comedy movies ever made,

Gol Mal is regarded as one of the best comedy films ever made in Bollywood, both by critics and spectators. A job search, a fake mustache, and a hockey game perplexity have never been so amusing. Utpal Dutt’s shrieks and cacophonous laughs are still legendary.

Aamir Khan and Salman Khan fight for the love of an heiress, and in the process, they wind up protecting her from crimes.  While the picture received mixed reviews when it first came out, it is now considered a cult masterpiece. The dialogue from this film has been cited, re-quoted, and incorporated into modern society. That is the brilliance of this unusual comedy.

Munna Bhai will go down in history as one of the most memorable personalities of the modern era. While the first installment (Munna Bhai MBBS) focused on an underworld don who took over a medical school, the second installment (Lage Raho Munna Bhai) focused on Gandhigiri and its significance in current society. Hardcore enthusiasts are eagerly waiting for the third installment with eager anticipation.

This film is famous for Dharmendra and Amitabh Bachchan’s humorous chemistry, as it was released shortly after the legendary Sholay. The film is a lighthearted comedy about a spouse who pulls a practical joke on his wife’s father. Hrishikesh Mukherjee, the undisputed king of situational humour, delivers one of his best works.

When a lively girl comes to stay for a few days and causes a ruckus, things in a rigid household alter. The film is known for Rekha’s comic genius and is considered one of the best rom-com ever made.

A Hindi adaptation of the Malayalam film from 1989. Rao Ramji Hera Pheri is a cult masterpiece, to be sure. The story revolves around a hazardous kidnapping case in which a troubled trio gets entangled and deeply involved. Watch this hilarious movie to know how they get out of it.

The film is a harsh satire on Indian politics and corruption about two pals who have to fight gangsters, mafia, and politicians. The characters are outrageously funny, with Naseeruddin Shah and Ravi Baswani escorting the body through a series of hilarious jokes. The climax, which features a ridiculous stage adaptation of the Mahabharata, is maybe the funniest scene in Hindi film history.

This is a strong contender for the best comedy film of all time. A simple guy falls in love with his attractive neighbour and enlists the support of his friends to impress the lady who is becoming more interested in her music teacher. The right chords were struck by fun and song. Sunil Dutt and Mehmood’s characters had famous singing battles. Kishore Kumar is the heart and soul of the film.

One of the best comedy movies in Hindi 3 Idiots is based on a novel by the name Five Point Someone, by Chetan Bhagat. This movie ranks as one of the highest-grossing films worldwide. The story follows the journey of two college friends in search of the third who went missing after their last day of college. To put it mildly, it’s a roller-coaster ride. Watch out for Omi Vaidya’s wild monologue in which she gives a speech in Hindi.

Two roommates fall in love with the same girl, but only one wins her heart. Everything that happens between the other two attempting to separate them and a happy ending is met with a barrage of laughter. Chashme Buddoor was the quintessential collegiate comedy from the early 1980s.

Also Read: 30 Comedy Movies From Bollywood That Are Too Funny To Watch

In this family of three single brothers, no-woman rules. When the younger lads fall in love, things take a turn for the worse. Kishore Kumar and Madhubala cranked up the romantic interludes with some high-tempo humour in this unusual madcap comedy. In what was India’s more expertly nuanced counterpart to the Marx Brothers, it also featured all three Ganguly brothers, Ashok, Kishore, and Anoop.

An NRI and his wife ignore the warnings about spirits and chose to reside in his ancestral home. Inexplicable events prompt him to seek the advice of a psychiatrist to solve the riddle.

The Dhamaal franchise is popular among comedy fans, with Lallan, Adi, and Manav’s antics making audiences laugh out loud. Guddu and Johnny rob the Mumbai Police Commissioner of 500 million rupees, but Pintoo escapes with the money. When Pintoo tries to flee the nation with his money, everything goes too bad, resulting in some amusing situations.

Luka Chuppi is a hilarious take on live-in relationships and how the younger generation’s lifestyle clashes with India’s traditional older generation. Guddu and Rashmi are head over heels in love. Guddu wants to marry right away, but Rashmi insists on living together first to see if they are compatible. Rashmi’s father Vishnu Trivedi, on the other hand, is a politician who is opposed to live-in relationships.

This film is one of the most latest Bollywood comedy movies, and it will not disappoint you. The primary narrative of this film revolves around a 25-year-old man who is forced to deal with a great deal of embarrassment when his mother announces that she is pregnant. Things do eventually resolve well, but not without us having to roll about in fits of laughter.

This film’s primary plot centres around a town that is terrified of a woman who abducts men after calling their names. Things take an unexpected and hilarious turn, leaving us gasping for air. This film hits the ideal mix between the humour, horror, and drama genres. Stree is one of the best comedy movies of Bollywood.

Dishoom is an action comedy film starring two cops who work together. Kabir and Junaid, two police officers, have a strained relationship. They must, however, embark on a rescue operation for Viraj, a prominent cricketer who has been kidnapped. It is arguably one of the best comedy movies in Hindi. It is one of the best comedy Bollywood movies.

Eros International distributes Housefull 3, a Bollywood comedy film that is the third instalment in the Housefull franchise. A wealthy man’s daughters are not allowed to marry because of a superstitious belief. To marry the girls, their boyfriends must first prove themselves. These “Housefull” movies are one of the best Hindi comedy movies of Bollywood.

A fertility specialist is looking for a healthy sperm donor. He comes upon Vicky and persuades him to become one. Everything is fine until Vicky marries and his secret is discovered. Furthermore, his wife is unable to conceive. Consider this one of the best comedy Hindi movies and coming-of-age pictures of recent years.

A desperate reporter creates a phony Osama Bin Laden for a fake video that will help him gain entry into the United States. The visa office closes when things don’t go as planned. This one is amazing, to say the least! It surely makes a place among the Bollywood funny movies.

These madcap comedies prove that great comedies can combine wit and intelligence, chaos and innovation, and idiocy and sophistication in equal measure. Hope you enjoy this Bollywood comedy movies list.