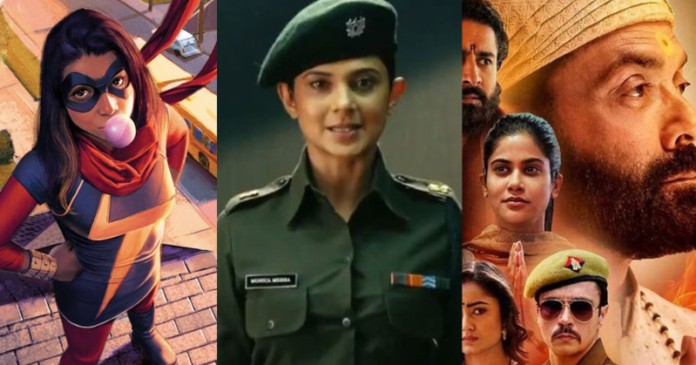 Web series releasing in June 2022: Looking for TV shows and web series to stream on OTT? Be it action, drama, romance, comedy, sci-fi, or superhero the June 2022 releases will serve all the mentioned genres. From crime thrillers She Season 2 and Code M season 2 to Superhero shows like Ms. Marvel and Umbrella Academy to and popular show Aashram returning with a brand new season 3, this time there’s so much to look forward to. OTT platforms including Amazon Prime Video, Netflix, SonyLiv, Disney+ Hotstar, Zee 5, MX Player & Voot are booming with quality content nowadays in different languages which are binge-worthy.

Here, we have listed all the popular web series and TV shows that will be released in June 2022 in India on OTT streaming platforms:

9 Hours, the story revolves around three fugitives attempting to rob three banks. They are well planned and know how to flee with the heist. Starring Taraka Ratna as a cop, as seen in the trailer the character is baffled by knowing a secret. Set in the 1990s Vinod Kumar, Ajay, Ravi Varma, Madhu Shalini, Ankith Koyya, Preethi Asrani, Jwala Koti, and Monica Reddy play important characters in the series.

The anticipated upcoming web series on Amazon Prime is the third season of the superhero series ‘The Boys’. The upcoming web series release date is June 3. ‘The Boys’ is a different and humorous take on the situation when superheroes do not use their powers for good and rather misuse them. What happens when superheroes who are as popular as celebrities, as revered as gods, and as influential as politicians, abuse their superpowers? This new web series features Jack Quaid, Karl Urban, Antony Starr, Dominique McElligott, Jessie T. Usher, Erin Moriarty, and many more.

The first two seasons of Aashram have been entertaining, audiences have high hopes for season Aashram Season 3. Acclaimed as the comeback of 1990s Bollywood big-screen actor Bobby Deol, got a lot of critical appreciation with this new web series. Based on Guru Ji at an Aashram who is revered by common people as well as the rich folks of the region, the series showcases how people are conned in the name of belief. The series stars Chandan Roy Sanyal, Tridha Choudhury, Anupriya Goenka, and Darshan Kumar, among others, and has been directed by Prakash Jha.

The hit CW series is all set to come up with its fourth and final season! In the Dark revolves around the life of blind young lady police, Murphy Mason whose chaotic life is given a new sense of purpose with the murder of her friend, Tyson. With her hands full while juggling her dating life and job she decides to solve it.

During Kargil Day celebrations, an assassination attempt is made on the life of deputy CM Joshi.  The assailant mysteriously drops dead after being chased and caught by Major Monica Mehra. Monica carries through a rigorous investigation and chases leads as the case gets handed over to SP Qureshi of CBI. Monica finds out some secrets that reveal the cause of the deaths of several Indian Army soldiers. Does it have a connection to Monica’s own past? Watch this upcoming web series in Hindi on Voot.

‘Ms. Marvel’ is about a Muslim American teenager growing up in Jersey City. The new web series introduces Iman Vellani as Kamala Khan, who plays the main character. She When it comes to Captain Marvel Kamala has an oversized imagination as she is a superhero mega-fan. Kamala thinks she is a misfit in her school and her home sometimes, an avid gamer, and a voracious fan-fiction scribe, she wants to get the superpowers like the heroes she’s always looked up to. The cast includes Farhan Akhtar, Saagar Shaikh, Aramis Knight, Rish Shah, Zenobia Shroff, Mohan Kapur, Matt Lintz, Yasmeen Fletcher, and many more. One of the best upcoming web series on Hotstar in June 2022.

The web series “She” season two is set to take the story of Bhumika Pardesi played by Aaditi Pohankar who plays the central character. The upcoming web series 2022 Hindi also features Kishore Kumar G., Vishwas Kini, Suhita Tatte, and Shivani Rangole. After swearing her allegiance to drug-lord Nayak, played by Kishore Kumar G., she must walk the dangerous line of switching sides with the police or with crime, while simultaneously exploring her newfound sexual liberation.

If you love psychological thrillers, this one is for you! “Evil” is coming back for Season 3! The show investigates claims of demonic possession by the Catholic Church while questioning science and religion for the everyday evils of modern life. It follows priest-to-be David Acosta (Mike Colter), skeptical tech expert Ben Shakir (Aasif Mandvi), and forensic psychologist Kristen Bouchard (Katja Herbers). The husband-and-wife duo Michelle and Robert King (“The Good Wife” and “The Good Fight”) has created a masterpiece.

PLAYERS is a mockumentary that follows a fictional pro-League of Legends e-sports team,  a documentary-style series that explores the world of the largest e-sport through a fictional League of Legends team’s pursuit of a championship. As they pursue their first championship after years of close calls they will need their prodigy, a 17-year-old rookie, and their 27-year-old veteran to work together by putting their egos aside. What could possibly go wrong? From the Peabody Award-winning creators of “American Vandal” (Tony Yacenda and Dan Perrault), this upcoming web series 2022 is a must-watch.

Pick any one or more of these amazing upcoming web series to watch this month and have fun. We have selected one of the best web series to be released in June 2022.