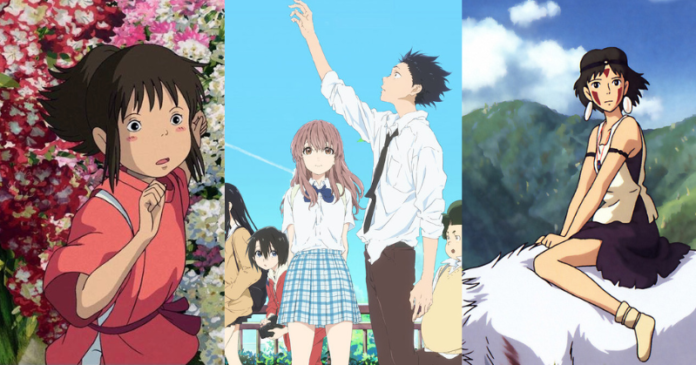 A wonderful mix of entertainment, imagination, excellent animation, and unique storylines. These Netflix anime movies are a crowd favourite! For anime fans who don’t have access to Crunchyroll or Funimation, the anime movies on Netflix are a lifeline. For quality-seeking eyes, Netflix has successfully obtained the rights to some of the best films from popular franchises, anthologies, and hard-to-find classic anime. They’re well-liked and regarded as the greatest in their genre, according to both audiences and critics.

So, here is our pick for the top 10 best anime movies on Netflix,

Gin, Hana, and Miyuki, three homeless persons, embark on a journey to identify the mother of an abandoned baby in Tokyo Godfathers, a lovely slice-of-life story. Tokyo Godfathers is a fantastic Christmas movie with themes like hope, good deeds, family values, feel-goodness, and a happy ending. This is one of the best anime of 2022. The plot is brought to life by the protagonist three and their genuine portrayal.

They’re well-written, and each one has a distinct and important plot arc in the form of their past. With a few Spanish-speaking characters, the film has a multicultural representation. Tokyo Godfathers is widely regarded as Satoshi Kon’s weirdest and greatest anime film, having outstanding animation and music for the period.

2. Nausicaä Of The Valley Of The Wind

In Nausicaä of the Valley of the Wind, humanity is on the point of extinction in a post-apocalyptic future. It’s almost as if it were influenced by Frank Herbert’s Dune. Giant insects, dense jungles, and kingdoms with both armoured knights and aeroplanes separate the image from others with similar themes, rather than mechas and advanced governments.

The film revolves around Nausicaä, the child princess of the Valley of the Wind Kingdom, as the title suggests. She is brave, strong, inspiring, kind, and loving, and she cares deeply about the well-being of her people and all living things. The film has an environmentalist subject and succeeds in conveying a powerful message to the audience.

3. Violet Evergarden I: Eternity And The Auto Memory Doll

These two chapters are beautifully intertwined to produce a single, unified story. The film’s best aspect is Isabella and Violet’s connection. Art and animation are lively, colourful, and appealing, and they conjure up images of a fantastic world. The film is primarily centred on Isabella and her sister’s story, which is a welcome change from the Violet Evergarden series. Character development abounds in this series, which is also a tearjerker.

End of Evangelion is a retelling of the final two episodes of the original Neon Genesis Evangelion series. Evangelion’s characters are all traumatised or coping with some sort of emotional problem, but the animation is faultless throughout. This is also considered to be one of the gay movies on Netflix. And the film does a good job of portraying the characters and their problems.

It examines questions of humanity’s existence and whether life is worth living. The protagonists are forced to confront the anguish that surrounds them, as well as Shinji’s and everyone else’s constant uncertainty and disarray. The genius of this picture is that it does not spoon-feed the notion to the spectator; instead, the audience is left to decide what is real, symbolic, and psychological.

5. The Disappearance of Haruhi Suzumiya

Haruhi Suzumiya’s Disappearance is based on the fourth light novel in the Haruhi series and takes place after the events of the series. It is one of the most popular and well-received KyoAni series. The characters’ reactions to the events surrounding Haruhi’s absence are depicted in the story. Kyon is used to whining about how ridiculous everything is, but now that Haruhi has vanished, he finds himself in a world where he has nothing to whine about. This is the best anime movie of all time.

Kyon, the protagonist, suddenly understands what he’s been waiting for. Nagato Yuki is an important character because, unlike a humanoid interface, she develops as a person. The Disappearance of Haruhi Suzumiya is a wonderfully crafted time-travelling epic that is both convoluted and emotionally exhausting.

The story of Sophie Hatter, a young, insecure young woman cursed by the spiteful witch of the waste with the body of a ninety-year-old, is told in Howl’s Moving Castle. In her desperate hunt for a cure, she discovers another magical being, the fascinating wizard Howl, and his moving castle. Howl quickly reveals his true colours as a plain good guy, offering Sophie sanctuary and supporting her in her search for the witch. It is based on Diana Wynne Jones’s children’s book.

The animation and settings are breathtaking, and the charm is just right. This is one of the best-animated movies on Netflix. In Howl’s Moving Castle, Miyazaki created stunning, painterly pastoral scenes full of distinctive charm. It’s excellent, with touching plot elements and themes like greed, cowardice, and the futility of war.

Miyazaki’s most powerful and thought-provoking film is Princess Mononoke. When Ashitaka, the young protagonist, is cursed while fighting a demon, he sets out on a quest to heal himself. He hears rumours of a woodland ghost with the ability to give and take life, and he soon finds himself in the middle of a human-animal fight.

During this, he learns of Princess Mononoke, a girl who sided with the animals. The picture has a significantly darker tone than Miyazaki’s other lighter flicks, and it sends a forceful message. It displays nature battling human civilisation, with humans seeking to topple each other inside the film. It succinctly demonstrates how self-destructive we are, as well as our impact on the environment.

Spirited Away is a fairytale journey from Studio Ghibli and one of the most visually appealing films ever made. It moves like a dream, thanks to wonderful animation and creativity. The film explores a child’s hidden wonder and incredible imagination. The protagonist of Spirited Away, a coming-of-age story, is Chihiro, a 10-year-old headstrong, spoiled, and naive girl.

Chihiro unexpectedly passes over into the spiritual world in an abandoned amusement park, which sets the tone for the film. Her journey through a mysterious realm to save her parents and return home is humorous and transports the viewer to a world of cryptic wonder that they have known from childhood.

Violet Evergarden is a fictional character. Violet’s narrative comes to a close in this film, which is a true tearjerker. The movie continues where the 2018 television series ended. Violet can’t seem to let go of Gilbert and refuses to accept his death. Everything about the film is a work of art, from the animation to the character designs to the locations.

Violet started as a mechanical, emotionally broken literal doll who couldn’t function without directions from above. Violet gradually learns to think for herself, act on her instincts, and understand what it is to feel “love” through her encounters while writing letters for various clients throughout the series. The film wraps out her character’s quest with a well-deserved happy ending.

A Silent Voice is a rollercoaster of emotions. It’s a heartbreaking portrayal of adolescent abuse, healing, and forgiveness for the grief we’ve caused ourselves and others. To progress, the film relies heavily on character development. It’s the story of Shouya Ishida, a high school student who wants to make amends with Shouko Nishimiya, a deaf girl he ruthlessly abused in sixth grade.

It’s a movie worth remembering and contemplating. The plot is certainly worth viewing, even though it loses some points for tracking the development of side characters. The camerawork, animation, character design, and graphics are all fantastic and well-received. The film’s high rating is well-deserved, as it deals with real-life issues such as bullying and mortality.