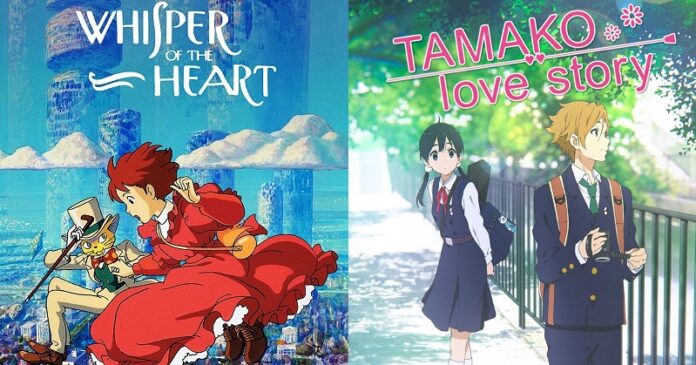 When it comes to romantic movies, directors like Hayao Miyazaki, Isao Takahata, Satoshi Kon, and many more have used one of the best themes. From forbidden love to love triangles, they create some evergreen romantic anime movies. If you don’t know, Ghibli is one of the most famous animation studios. It specializes in anime movies. Besides that, over the years, many anime studios have also produced masterpieces in anime films.

From “Whisper of the Heart” to “From Up on Poppy Hill”, here are some of the best romantic anime movies to watch that too with the highest ratings.

“Flavors of Youth” is one of the best and most well-known anime movies romance. In this film, three different stories of youth are set in different cities of China. With a 6.6 IMDb rating, it is a must-watch movie if you are a romance fan.

In this movie, a young man bullies a deaf girl to the point where she moves away from the school. After bullying, the young man is ostracized by his classmates. However, after many years, he sets off on a path for redemption.

In this movie, Aoyama-kun, a fourth-grader investigates the mysterious reason behind the sudden appearance of penguins in his village. Interestingly, he thinks that it is somehow related to power from a young woman working at a dental clinic.

“Whisper of the Heart” is one of the best anime movies romance that revolves around a girl who loves reading books and a boy who has previously checked out all of the books she chooses from the library. With a 7.9 IMDb rating, this is a must-watch movie.

In this romantic movie, a seventeen-year-old girl helps a cat. After helping, she involuntarily engaged to a cat prince in a magical world. However, her only hope of freedom lies with a dapper cat statuette coming to life.

This is one of the best anime movies with romance that is portrayed in three interconnected segments. The story of this movie follows a young man named Takaki through his life as adult obligations, responsibility converges, cruel winters, and cold technology to test the delicate petals of love.

“From Up on Poppy Hill” is one of the best anime movies with romance. In this movie, in preparations for the 1964 Tokyo Olympics, a group of Yokohama teens looks to save their school’s clubhouse from the wrecking ball.

In the movie “Anohana: The Flower We Saw That Day” when one of the friends died in an accident, the rest of the group gets separated. Later, she comes back as a ghost trying to get into heaven. However, her friends must grant her a wish to help her get to heaven.

This comedy anime movie is about one epic night in Kyoto. It showcases a college sophomore who goes on a series of surreal encounters with the local nightlife. Meanwhile, she is unaware of the romantic longings of her classmate Senpai.

“The Garden of Words” is one of the best romantic anime movies on Netflix. The movie revolves around a 15-year-old boy and a 27-year-old woman. In the Shinjuku Gyoen National Garden, they find an unlikely friendship one rainy day.

“Patema Inverted” is a romantic movie where a young girl belongs to a civilization that resides in deep underground tunnels. Later, she finds herself trapped in an inverted world. So, to escape, she teams up with a resident and returns home.

Miyo Sasaki is in love with her classmate Kento Hinode in this movie. She tries repeatedly to get Kento’s attention by transforming into a cat. However, the boundary between herself and the cat becomes ambiguous at some point. It is one of the best anime movies to watch.

The movie “The Moment you Fall in Love” is the second film based on the Vocaloid song from “Kokuhaku Jikko Iinkai – Renai Series” by HoneyWorks. It is following Tetsuya Yanagisawa’s previous anime, “Zutto Mae Kara Suki Deshita”.

When it comes to romantic movies, “I’ve Always Liked You” is one of the best anime movies of all time. It is a 2016 Japanese animated youth romance film directed by Tetsuya Yanagisawa. This movie is undoubtedly a must-watch movie.

In this movie, Konoha is a prodigy in writing. He won a prize for writing a novel as a child. To win his affection, three girls with different views on literature are fighting. Meanwhile, Konoha struggles to rebuild his relationship with his childhood sweetheart.

In the movie “Only Yesterday”, a twenty-seven-year-old office worker travels to the countryside. Meanwhile, he is reminiscing about her childhood in Tokyo. If you are looking for a romantic anime movie, then you should surely try this.

In the movie “Hal”, Kurumi falls into a reclusive and joyless existence following the tragic death of her boyfriend Hal. After that, an android is sent to help her cope with who resembles Hal and to draw her out of her solitude. Released in 2013, it is surely a must-watch movie.

“Her Blue Sky” comes under one of the best anime movies new that are full of romance. If you don’t know, the original title of this movie is “Sora no aosa o shiru hito yo.” With a 6.8 IMDb rating, you should surely watch this movie.

In this movie, the romance starts between two people with communication issues. The story revolves around a shy girl who wears a mask and only does online videos and a boy who wears headphones and uses haiku poems.

This is an age story involving young love and a piece of mysterious music. Interestingly, the music is coming from a crystal radio left as a memento by an absent father. And, that leads a young heroine deep into a hidden world. This movie will keep you on the edge of the chair all the time.

“Hello World” is one of the must-watch romantic anime movies new where a man travels in time from the year 2027 in order to relive his school years and to correct a bad decision. It is a classic romantic movie that the audience loved.

When it comes to romantic anime movies, “Ride Your Wave” comes under one of the famous anime movies to watch. In this movie, a surfer and a firefighter meet and fall in love. This romantic movie will make you fall in love with it.

In this movie, a young girl had her voice magically taken away so that she would never hurt people with it. However, when she encounters music and friendship, her whole outlook changes. With a 7.4 IMDb rating, it is one of the well-known anime movies among the audience.

“Into the Forest of Fireflies’ Light” is a romantic anime movie where Hotaru gets lost in a forest as a child and is rescued by a spirit. The spirit revealed that he will disappear if he is ever touched by a human. Regardless of that, the two become good friends.

“Tamako Love Story” is a sweet romantic anime movie that will make you fall in love all over again. In this movie, Tamako and Mochizou are childhood best friends. However, the life of Tamako changes when suddenly Mochizou confesses his love.

In this movie, a high-school girl named Makoto acquires the power to travel back in time. She decides to use it for her own personal benefits. However, she did not know that she is affecting the lives of others just as much as she is her own.

“The Castle in the Sky” is a famous romantic anime movie where a young boy and a girl must race against pirates and foreign agents with a magic crystal in order to search for a legendary floating castle. It is a must-watch anime movie with romance to watch.

In this movie, Tsuneo is a university student and Josee is a young girl. Due to her being unable to walk, Josee rarely went out of the house by herself. When Josee’s grandmother was taking her out for an evening walk, the two of them finally meet.