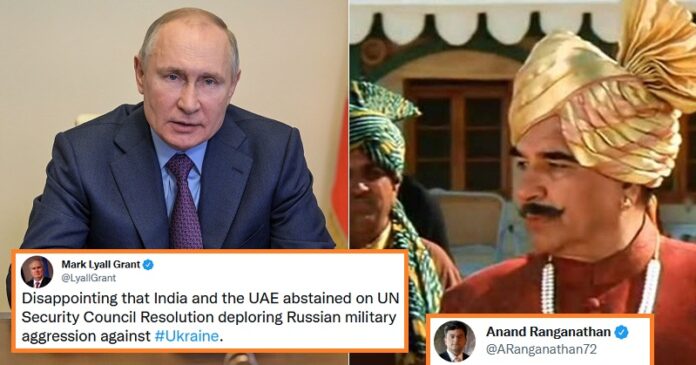 Many foreign diplomats have started dissing India’s position after India abstained to vote at the United Nations Security Council’s resolution against Russia for invading Ukraine recently.

The JNU Professor and noted author Dr. Anand Ranganathan responded by dissing those diplomats in the most fitting way.

Russia’s recent Ukraine invasion and the ensuing war have caused a crash in major economies of the world. The United States presented a resolution at the United Nations Security Council that “deplores in the strongest terms” Russia’s “aggression” against Ukraine. India was one of the three countries that abstained to vote.

Though it is important for us to look after our own interests as many diplomatic experts would say. However, certain foreign diplomats believe India’s decision to abstain from voting is “disgraceful,” and “disappointing.”

A British diplomat found India’s response to be “disappointing,” to which Dr. Ranganathan responded by writing, “Not one of you, or your friends in the EU, condemned China when it provoked us, tried to invade us, and killed our soldiers. NOT ONE.” 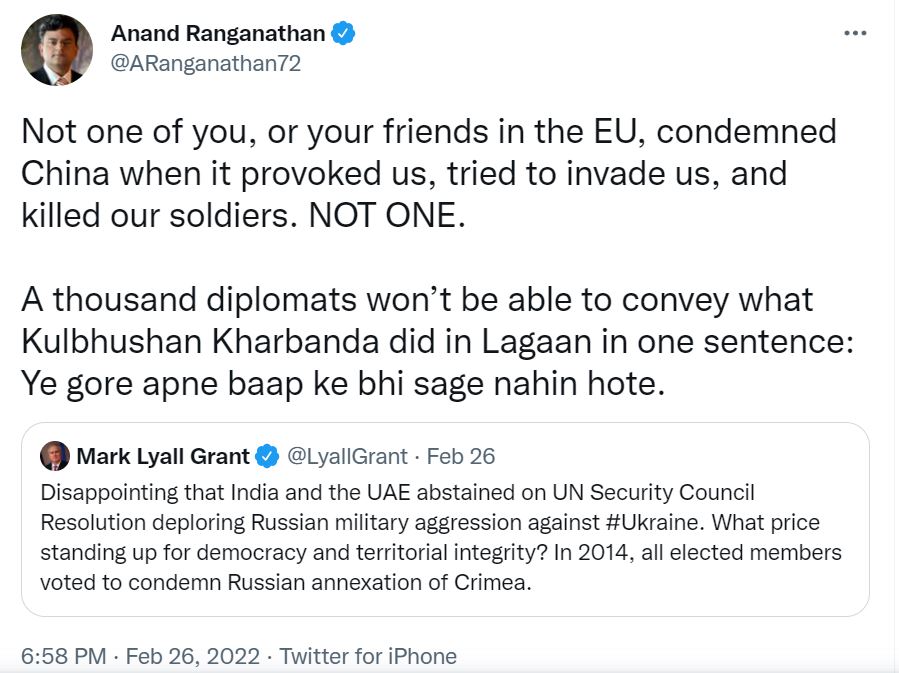 The context: When Chinese troops crossed into Indian territory back in 2020 & 2021 and killed soldiers in an act of aggression of foreign land, the western powers like the United States and the United Kingdom just stated verbally that it was an unfortunate incident. Dr. Ranganathan points out rightly that during that period neither any resolution was introduced nor did the western country condemn China for its deeds. We were left with no option and had to defend ourselves.

Pointing the inherent pretense that most American and European diplomats have, Dr. Ranganathan, mentioned Kulbhushan Kharbanda’s character from Lagaan, Raja Puran Singh, and quoted, “A thousand diplomats won’t be able to convey what Kulbhushan Kharbanda did in Lagaan in one sentence: Ye gore apne baap ke bhi sage nahin hote,” which means “These white folks aren’t loyal to their own fathers.”

The netizens on Twitter also joined in and called out the evident hypocrisy. Before that, you can have a final look at the original post by Anand Ranganathan below:

Not one of you, or your friends in the EU, condemned China when it provoked us, tried to invade us, and killed our soldiers. NOT ONE.

Also, you can check out the Twitter thread started by Mark Lyall Grant which was targetted by Anand and several other people as evident by the thread itself. Have a look!

Disappointing that India and the UAE abstained on UN Security Council Resolution deploring Russian military aggression against #Ukraine. What price standing up for democracy and territorial integrity? In 2014, all elected members voted to condemn Russian annexation of Crimea.

Here’s an interesting pick by a Twitter India user. Do let us know if you agree to it or not. Also, if you have some other views then feel free to share them in the comments section.

The west & NATO after abstaining to help ukraine after provoking the war, are lecturing India.
Its a waiting game, they are playing to graner support from world before they get into action.
These comments are nothing but part of their game.
We are not playing this dirt game.

Also, here’s a man who has his own views on this whole scenario. Does any of it make sense yet?

This Man Predicted The Outcome of #UkraineConflict Way Before Anyone Else…

When it comes to India’s foreign relations, especially with the west, the truth has been spoken.