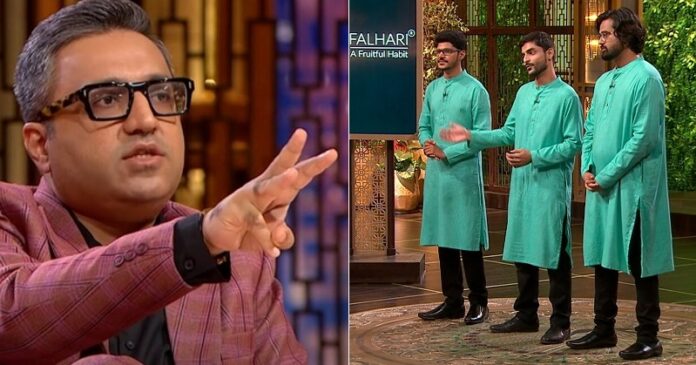 Ashneer Grover, one of the judges (Sharks) of the business reality show, Shark Tank India, and the CEO of BharatPe made it to the headlines when he recently resigned from the company. His spell in Shark Tank India had been eventful and he developed quite the reputation on the reality show. Ashneer’s life post-television has been event-filled too.

Reportedly on Tuesday, Ashneer quit BharatPe, he wrote in his resignation letter that he is leaving with his head high up, despite being ‘vilified’ in the public. Madhuri Jain Grover, his wife, who was also his co-worker was sacked recently from the company for alleged financial irregularities.

Ashneer had several heated interactions with the aspiring entrepreneurs on the show, he is well known for his temper and certain rude encounters with the contestants. During one such encounter, he targeted a trio of founders and asked them to shut their business for not having a sustainable approach.

The three co-founders of a fruit-selling business called Falhari pitched on the show, they asked for Rs 50 lakh in exchange for 2% equity in their company. Several sharks showed interest initially, but Ashneer was unshakeable and against the idea from the start. When a fellow judge, Vineeta made an offer and went over their revenue, Ashneer jumped in and said-

Addressing one of them Ashneer added,

Ashneer observed that the most eloquent of the three founders had the lowest equity in the company. He couldn’t digest the fact and called him ‘greedy’. The candidate defended himself by saying, “Equity ki greed nahi hai,” to which Ashneer replied, “Hai greed, tune kya ukhaada hai (What have you achieved)?”

After Vineeta’s offer was rejected by the entrepreneurs, Ashneer added his final words by saying-

Check out the episode: