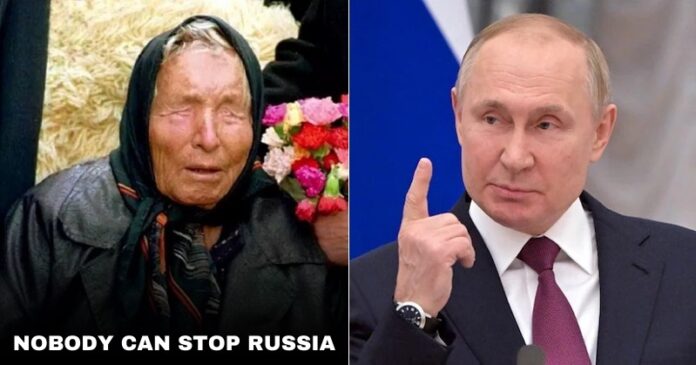 At an unpredictable time like this when the Russian President, Vladimir Putin has declared war on Ukraine, the humans are filled with curiosity about the future and everyone wants to know what will happen next.

Everyone is talking about a prediction made by the Nostradamus of the Balkans, Baba Vanga (Bulgarian clairvoyant Vangelia Gushterova).

Baba Vanga died at the age of 85, almost 26 years ago but her predictions still hold value to date. She is very famous among conspiracy theorists because she could predict global events way before they happened. This blind psychic is famous as she is said to have made predictions and foretold major events like the 9/11 terror attacks, and Brexit.

Now, amidst the devastating attack on Ukraine by Russia, one of Baba Vanga’s predictions went viral. The Daily Mail reported that she has told their writer Valentin Sidorov that Russia is going to rule the world. Baba Vanga’s predicted Russia would become ‘lord of the world’ after Europe becomes a ‘wasteland.’

As per Birmingham Mail, she said,

“All will thaw, as if ice, only one remain untouched – Vladimir’s glory, glory of Russia.” She had further added, “Too much it is brought in a victim. Nobody can stop Russia.”

“All will be removed by her from the way and not only will be kept but also becomes lord of the world.”

It is said that Vanga, who was born in 1911, lost her eyesight at the age of 12 mysteriously during a massive storm, and just after that her visions and ability to predict the future began. Vanga also predicted America’s 44th president would be African-American and the rise of ISIS.

Vanga has left behind predictions that run until the year, 5079. She believed that the world would end by this year. She reportedly had a success rate of 85 percent in her predictions.