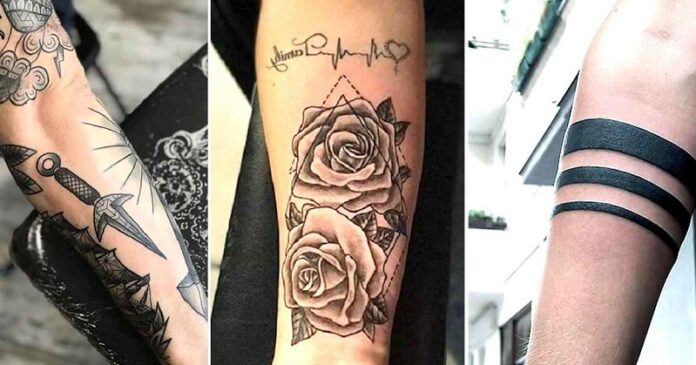 Tattoos have become a popular way to show off one’s personality or sentimentality. Even if you have a basic idea of what you want, deciding what to get might not be challenging. It will, after all, stay there indefinitely. Furthermore, because your arm is visible for about half of the time, it will draw attention to itself. Arm tattoos can get detailed and cool if done right. Arm tattoo ideas are quite versatile with men being able to print their forearm, upper arm, front or back bicep, triceps, or complete sleeve.

For a truly stunning appearance, hardcore guys choose upper arm tattoo ideas that wrap around the shoulder and reach to the back and chest. Fortunately, no matter where you get inked, artists have created and released a selection of unique men’s arm tattoo designs.

Here are 20 arm tattoo ideas for men for a powerful impression:

Tribal tattoos for men typically start at the shoulder and wrap around the body in a rounded style. They have the most attention to detail and appear to be the coolest people in the room. It is one of the most common tattoo ideas for men.

Do you have the courage to have a tattoo on your palm? It takes a lot of guts. This wolf pattern is beautiful, however, keep in mind that it will fade in the meantime because of the sweat on your hands. That is why it this tattoo is two-in-one as you can also get this tattoo inked on your arms.

So far, all of our hand tattoos have faced the owner, but this one puts on a show by facing the other way, towards your “audience.” It is one of the most versatile tattoo ideas for men.

A traditional-style heart and banner’s simplicity has endured the test of time. Make sure the banner’s name is someone you’ll love for the rest of your life, like your mother or father or your dog.

The bicep tattoos for men are such a cool and fantastic look these days, especially when the tattoo demonstrates how nicely the artwork fits on the inner bicep. This is the most popular and appealing tattoo design among today’s youthful and fresh generations.

The heart arm tattoos are a terrific way to show off your gentler side. Using an anatomical design instead of a standard tattoo is a good change of pace.

Geometric arm tattoos, which have been increasingly popular in recent years, break down an apparently commonplace object into a series of angles and patterns. This approach is especially appropriate for animal designs since it adds interest to a simple idea.

Religious tattoo on arm is a common way to show one’s dedication to God and faith. Consider purchasing an image of the Hindu god Shiva, Lord Hanuman, the Shiva trinetra, or any other religious symbols like Jesus Christ, the Virgin Mary, the crucifix, angels, or a combination of these to display your views.

Tattooing a likeness of your loved ones to express your love and emotions for them isn’t a big deal. The current trend is to have a tattoo of a loved one or a family member, and every new generation is eager to do so.

If you merely need a single word or two in bold font, hire a lettering artist. Lettering is a sort of art, and it’s a great way to call attention to a single important word.

Animal tattoo on arm is a terrific way to cover an arm in an animal-themed design. Animal tattoos are available in a range of forms and sizes, spanning from the biceps to the wrist, and you can get the tattoo of your dreams that makes you look cool and unobtrusive.

If you’re unsure about what kind of tattoo you want or get frightened of getting a full arm tattoo because of your employment, get a ring-shaped tattoo over your biceps or below the elbow, which you can enlarge.

A single non-breaking line gets used to form a design in single-line tattoos. If done effectively, it’s an astounding illusion that the artistic type will like.

Space is a lovely concept that is difficult to define. The sky and stars, the universe, and countless galaxies have all been captivating and ineffable to convey their enormous expletives, making you more appealing and stylish. A connected tattoo on your arm can express the essence of space and its worth, from a bursting star to an astronaut floating aimlessly.

Insect tattoos, which range from butterflies and scorpions to bees and spiders, are possibly more popular than the insects themselves. After getting a bee tattooed, no one needs to know if you still jump at the sight of a spider or swat away a bee, that’s how people mean it.

A tattoo of an animal skull is a great way to show gratitude to nature (and death, for that matter). Animal skulls are artistically attractive and edgy, from bird skulls to steer skulls.

When you see a flame tattoo, the image of a tough-as-nails OG biker is likely to come to mind. Even if you don’t have a motorbike license, you can channel that enthusiasm with matching ink.

Any book nerd will appreciate a literary tattoo honoring their favorite book. Literary tattoos honor the written word’s power and effect in a number of ways, from words to cover art to any other artistic expression.

Snake tattoos are a true classic because of their twisted and jagged design, which is visually captivating. They are frequently associated with skin loss and regeneration, as well as wisdom and patience. However, project a calm demeanor, which is probably sufficient for most powerful guys.