“La Casa de Papel/Money Heist” is Netflix’s action-packed series. Besides the theme song “My Life is Going On” by Cecilia Krull, the Italian folk song “Bella Ciao” was heard frequently in the series. In a scene with the Professor and his older brother Berlin, viewers are first introduced to the song. During one of Tokio’s (Úrsula Corberó) narrations, she helps the viewers with the Bella Ciao meaning. Not just that, she also explains how the thieves were first introduced to it.

Tokyo says on the show that the professor’s life revolves around “Resistance”. His grandfather taught him the song who had fought against the fascists in Italy. Later, the professor taught that song to them. The true fans will notice the song is played during big plot points only. For instance, when Moscow manages to forge a tunnel leading out of the Mint in season 1, the crew sings “Bella Ciao”.

Here is to know everything about Money Heist’s unofficial theme song.

According to “Arts and Terror” by Vladimir L. Marchenkov, “Bella Ciao” means “Goodbye Beautiful”. Since this Italian folk song was used as an anthem for the anti-fascist resistance, it is sung worldwide as a hymn of freedom. On the other hand, Jerry Silverman reports in his book “Songs That Made History Around the World” that it was first sung by women working in the fields of Northern.

However, the lyrics changed to reflect “the partisans fighting the fascists” during World War II. Later, that is used on “La Casa de Papel/Money Heist” with lyrics infused with bravery and defiance. So, this is the Bella Ciao meaning in Money Heist that the professor teaches to everybody in the show.

Song Of Solidarity During Pandemic

“Bella Ciao” became a song of solidarity for the world due to the COVID-19 pandemic. Since Italian people were at the epicenter of the pandemic, many people have sung it in their support. A neighborhood began singing the song in unison in one area in Germany as their neighbors played live instruments:

Besides that, several Italians shared clips on Instagram singing along to the song from their balconies:

“La Casa de Papel/Money Heist” is packed with hidden messages throughout its series. Not just the show, even its songs send a strong message as well. One of the symbols is the red coveralls the thieves wear. According to Google Arts & Culture Center, it symbolizes new liberties, and freedoms during several revolutions around the world.

The Salvador Dalí mask is another prop with deeper meaning. During Zurich’s Dada movement, the famed Spanish artist created much of his work which was about rejecting the modern capitalist society, according to the Tate. That is why there is Bella Ciao’s meaning in English as well. For instance, the season 3 tagline was “join the resistance”, and also the last words spoken were “Then, it was war.” So, this is the Bella Ciao meaning in English in Money Heist. And if we talk about Bella Ciao’s meaning in Hindi, it has the same meaning as English. 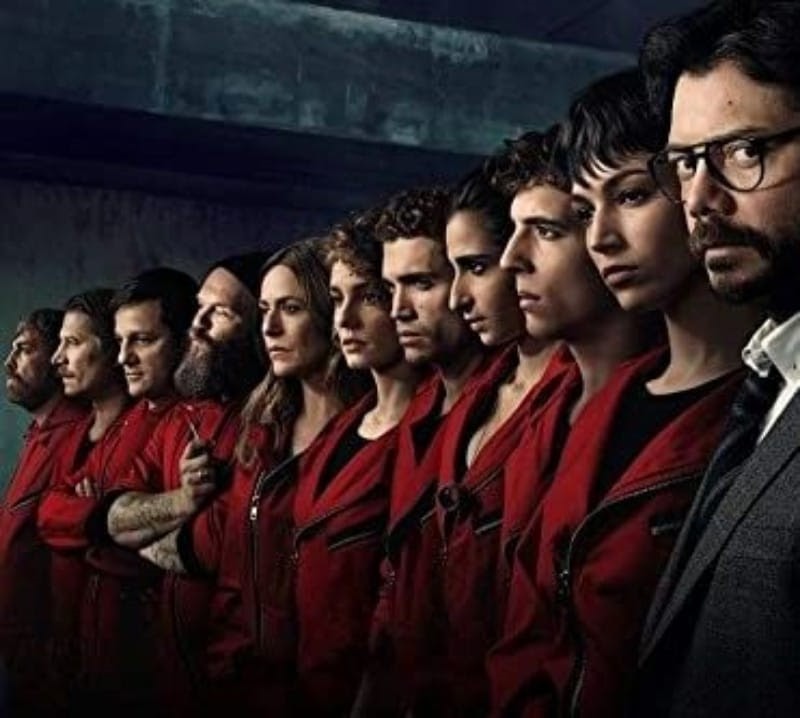 In Money Heist’s season 1 finale, during a flashback where Berlin tells the Professor to escape and save himself, the significance behind “Bella Ciao” is revealed. The Professor deflects by telling him that nothing will go wrong when Berlin asks him to make a promise. The professor said, “We’re the resistance, right?” Tokyo (Úrsula Corberó) explains in voiceover as he begins to sing “Bella Ciao” that the Professor’s grandfather fought with the partisans during World War II. His grandfather him this song and he taught it to the gang.

The Professor embraces the ideals of resistance and freedom in “Bella Ciao”. Also, he blinds himself to the fact that it’s a song about death. In Money Heist, the goal of the Professor and the gang was not just to get rich. He wanted himself and the gang to print their own money rather than stealing anyone else’s. He justifies their action thusly while speaking to the police by saying, “In 2011, the European Central Bank made €171bn out of nowhere. Just like we’re doing. Only bigger.”

He further continued, “Do you know where all that money went? To the banks. Directly from the factory to the pockets of the rich. Did anyone call the European Central Bank a thief? No.” Then the professor explained, “‘Liquidity injections,’ they called it. I’m making a liquidity injection, but not for the banks. I’m making it here, in the real economy.”

In Money Heist, it’s a cry of resistance against a capitalist system. While a generation of people was struggling, the system bailed out the banks following the financial crisis of 2007-2008. It’s little wonder that “Bella Ciao” renewed its popularity as an anthem of resistance in between Money Heist seasons 2 and 3. Money Heist rejuvenated a powerful song that was the mirror of the real world and the issues people are still facing. That is why Bello Ciao meaning in English is against oppression, mistreatment, and the desire for freedom.