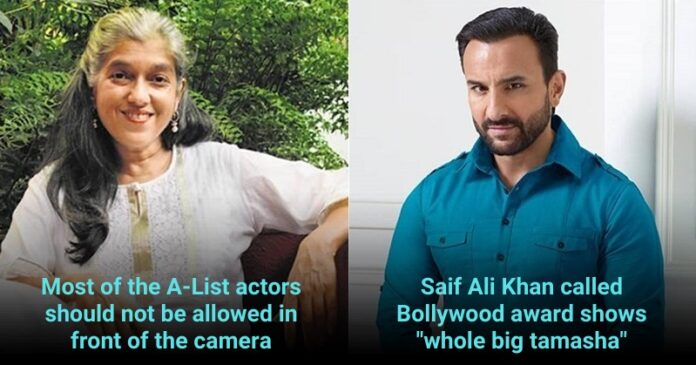 Just like any other industry, the Hindi film industry is also based on the model of making profits. However, the stakes here can get pretty huge for the people who are involved in the whole process, especially the actors. This leads to brutal commodification and unfair expectations, which very few have been brave enough to call out. Here is the list of 12 celebrities who dropped the truth bombs and spilled the beans on the inside world of Bollywood. Let’s check out:

At the launch of a book written by PoojaBhatt’s sister Shaheen Bhatt “I’ve Never Been (Un) Happier”, she made this statement, and while elaborating on the topic, she said:

2. Pooja Bhatt: When She Spoke About Things Being “All Surface”

Pooja said, “It’s all surface. They don’t give a damn if you’re a cocaine addict, whether you have an alcohol problem or you’re taking sleeping pills. As long as you look okay and show up and your waist size is a certain circumference, it’s good.”

3. Neena Gupta: The Portrayal Of Women Actors When She Was Starting In The Industry

Neena Gupta said, “The heroine in those days was not portrayed as someone strong, more often than not. Generally, she was someone who compromised with the circumstances and sacrificed a lot. So, I think an actor has to be very careful that what image of theirs is created by the media.”

4. Ratna Pathak Shah: Evaluated “Sholay’s” Worth And The Need For India To Introspect More As A “Filmmaking Nation”

Ratna Pathak said, “I was thinking if I were a French person watching this, what would I make of two grown men behaving in this manner? It was deeply embarrassing. I thought back on “Sholay”. It’s a series of stereotypes and borrowed ideas from films from all over the world, mainly American, of course. And we are still singing praises of that film. What kind of self-analysis are we doing as a filmmaking nation?”

5. Ratna Pathak: Most Of The A-List Actors Should Not Be “Allowed In Front Of The Camera”

She again said, “Too many of our grossly overpaid stars should not even be allowed in front of a movie camera. There should be a law to prevent such people from acting!”

6. Shefali Shah: Raised The Age Issue And About The Industry Who Has No Idea What To Do With Women Actors Over 40

Shefali Shah said, “Men in this industry are afforded more choices, regardless of age. For the most part, Bollywood doesn’t know what to do with a woman who has crossed 40. Only recently are parts being written for women like me.”

Saif said, “As I see them, awards functions are an excuse to make some money by performing on stage. If you have the intelligence, then you spend the money well.”

He again said, “To be honest, I don’t believe in them. Some years ago I was called for an awards function. When I got there someone higher up in the organization told me, “We wanted to give you the Best Actor award. But you know how it is. We’ll give you the award for Best Actor in a comic role.”

9. Abhay Deol: About The “Lobbying” That Exists In The Hindi Film Industry And Its Impact On The Award Season After ZNMD’s Release

Swara said, “Bollywood as an industry is based on relationships, it has always been star-driven and it has an element of feudalism. So, it would be difficult for an outsider but my experience of Bollywood is not nepotistic at all.”

11. Surveen Chawla: Struggles She Faced Someone Else Has Better Contacts

She revealed, “I was not scared even though I had left TV at the peak of my career. But in the middle of this transition, when I was stepping up, I was thrown back down. For what reason? The question is not of my talent, but about somebody who had better contacts; that’s it. It took me some time to come out of it, but then other things happened, and it instilled confidence back in me.”

12. Naseeruddin Shah: How Film And Television Shows In India Propagate Sexism And Called Them “Rubbishy”

He said, “Commercial films are glorifying a lot of orthodox concepts and that should change. Unfortunately, the television series has also done a lot of permanent damage by propagating completely outdated and misogynistic situations by showing the woman to always be at her husband’s beck and call – lying at his feet, or waiting around, like ‘Main Tulsi Tere Aangan Ki’. This kind of rubbishy and regressive family values have absolutely no place in today’s world. ”