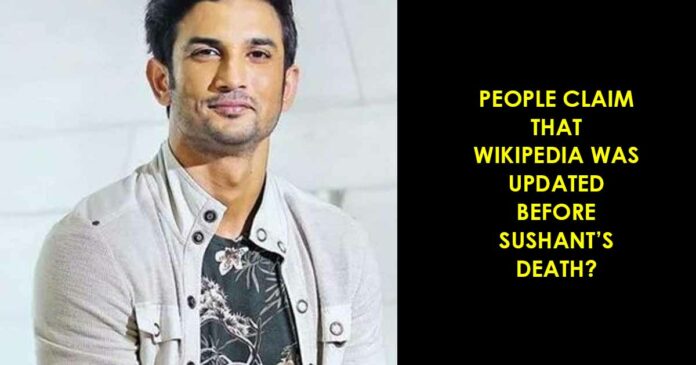 Since Sushant Singh Rajput’s death, there are a lot of conspiracy theories going around on social media, with some people being strongly of the belief that it might be a case of murder and not a suicide.

Also, click here to check our collection of best dialogues by Sushant Singh Rajput in his movies.

The Mumbai police initially declared it a case of suicide, and they have not changed their stance ever since, even though they have launched a full-fledged investigation and have been interrogating a lot of people.

One of the things which caused the suspicion in the minds of Sushant’s fans was the fact that the news of the actor’s death was updated on his Wikipedia page at 8:59 am, while the news came out in national media at around 12:30 pm.

Sushant was fine till 8:59 am and it is understood that he even had a phone call with his sister at 9 am, so how can someone know at 8:59 am that the actor was going to commit suicide? That’s the question which has been causing stress to Sushant’s fans.

Many of them highlighted it on twitter with the screenshots of the edit history of the Wikipedia page of Sushant.

8:59 am 14th June Sushant’s Wikipedia was updated & mentioned that he is committed suicide!!! Who was this astrologer ???@MumbaiPolice please don’t tell us that he updated his Wikipedia before his death, cause user id is avialable there… #cbiforsushant @RoopaSpeaks pic.twitter.com/3zVgYhQGEd

How this can be possible? According to police Sushant singh talked to his sister at 9am, and on Wikipedia someone updated at 8:59am that he committed suicide!! How is this possible? #AmitShahDoJusticeForSSR pic.twitter.com/bbsEbGteFF

However, there are a couple of things which need to be noted here. First of all, Wikipedia is an open website for everyone, and every user has the right to update the content on the website.

The editors of the website later verify the content, and if it’s found to be fake content, they remove it from the page and in some cases; they even ban the user as well.

Secondly, Wikipedia works on Coordinated Universal Time (UTC) and not on Indian Standard time (IST). UTC runs 5 and a half hours behind IST which means if something has been updated at 8:59 am UTC, the timing according to the IST is 2:29 pm.
So, the news of Sushant’s death was updated on Wikipedia well after the news broke out in national media.

You might be interested to know some of the movies in which Sushant was the first choice but couldn’t be in it till the end. Click here to know the names of such movies and also learn the reason behind it.