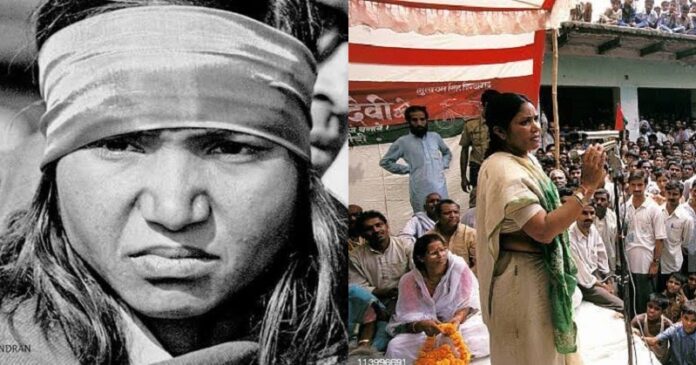 Phoolan Devi, often known as the Phoolan Devi the Bandit Queen, who was born in Uttar Pradesh on August 10, 1963. She was born into an impoverished family where females were seen as a burden. She was married off to a much older man when she was very young. Phoolan Devi husband had committed numerous acts of cruelty against her, forcing her to leave him.

Before Phoolan Devi decided to become a gun-wielding dacoit, she had to endure even more humiliation as she was abused multiple times. Before surrendering to serve 11 years in prison, she became a deadly and feared dacoit. Phoolan Devi, the bandit queen wanted to live a dignified life after her release from prison and went into politics. Her story is controversial as well as inspiring.

Here are some facts about the Bandit Queen:

In India, people always discriminates one another on several grounds. And, Phoolan Devi was no exception to that. From the start, this woman was treated unfairly because of her caste. Phoolan’s life changed dramatically when she was 11 years old.

Due to its rough, undulating, deceptive gorges and thick overgrowth, Behmai filled in as a sanctuary for dacoits during those years. Today, the gorges prompting the town have been edited to oblige broadening pucca streets, and the banks of the Yamuna are spotted with machines boring for sand.

Phoolan Devi got married at quite a young age. Her husband Putti Lal was an elderly man. Her uncle, Mayadin brought this proposal when she was 11 years old. At this age, Phoolan was unprepared to marry, despite that she got married.

Phoolan Devi became a misconduct victim not long after her marriage. Phoolan Devi story after marriage is really heartbreaking. She dashed back to her home after that. Phoolan Devi began to split her wages with her father after she returned home. Life was difficult during this time for Phoolan Devi.

Phoolan Devi was sexually assaulted by the gang of the Thakurs of the village when she was only 15 years old. Due to this incident, Phoolan continued to wander from door to door in search of justice. After failing to find it anywhere, Phoolan decided to pick up a gun and become a dacoit.

Justice is hard to get when you are woman and nobody listens to you. This incident did not end with Phoolan Devi. Several dacoits attacked this woman’s village, and she was forced to wander from door to door in search of justice.

The Dacoits then kidnapped Phoolan and sexually assaulted her several times. Phoolan’s life changed dramatically here, and he met Vikram Mallasah. Then the two of them formed their own robbery gang. Here’s Phoolan Devi’s real photo during her Dacoits time.

Then Phoolan decided to use him to avenge the gang rape. In 1981, 22 members of the upper caste were forced by them to form a line and shot them. Finally, Phoolan Devi was able to take her revenge.

The Fear of Phoolan spread throughout Chambal after that. The government ordered Phoolan’s arrest, but the police in Uttar Pradesh and Madhya Pradesh were unable to apprehend her.

When the police were unable to catch and arrest her, then Prime Minister Indira Gandhi asked Phoolan Devi to surrender in 1983. Phoolan agreed to this and surrendered herself to the government.

Vikram was the partner of Phoolan Devi in the robbery gang. However, Vikram Mallah, Phoolan’s partner, was killed in a police encounter as a result of the compulsion with Phoolan.

Phoolan did not surrender on the spot; she put conditions to the government. The first of which was that she and her associates be spared the death penalty. The next condition Phoolan set was that no one in her gang should be sentenced to more than 8 years in prison. The government agreed to these conditions.

However, Phoolan Devi was sentenced to 11 years in prison without a trial. Following this, Phoolan was released from prison by the Samajwadi government in 1994. That was the time when she entered in the politics of India.

Only two years later, Phoolan received an invitation to run for the Samajwadi Party’s Mirzapur seat, where she won, became an MP, and traveled to Delhi. Here’s Phoolan Devi real photo during her campaign.

According to The True Story of Phoolan Devi, which served as the inspiration for Shekhar Kapur’s critically acclaimed film Bandit Queen, “there are various versions of what happened to Devi after Mallah’s death.” When I spoke with her, she was hesitant to discuss her beizzati (dishonor) at the hands of the Thakurs. She did not want to indulge in the details and simply expressed ‘un logo ne mujhse bahut mazak ki (they had a lot of fun at my expense)’.

The legal battle has been raging for years. In 2012 alone, charges were brought against the five surviving accused robbers. The first FIR was filed against four thieves, including Phoolan and Mustaqim, and 36 others unidentified. Prosecutors alleged in 2012 that Maan Singh ran a restaurant in Chaura but never appeared in court.

18. How Was Phoolan Devi Killed

She was struck multiple times in the head, chest, shoulder, and right arm. Balinder Singh, her own safety officer, was shot in the right chest and right arm and returned discharged with a 9-mm administration gun as the shooters ran away from the area in a Maruti 800 vehicle. They escaped the vehicle in no place and boarded an auto cart. The police recuperated a Webley and Scott gun and an ad-libbed gun, an IOF.32 Revolver, just as nine unfilled and fifteen live adjusts, from the scene. Devi was taken to the Ram Manohar Lohia emergency clinic, however, she was articulated dead. Sher Singh Rana, the fundamental suspect, later gave up to the police.

On 26 January 1996, the famous movie director Shekhar Kapur came up with the Phoolan Devi picture. Seema Biswas played the character of Phoolan. Initially, the movie got into controversies but later it made a hit at the box office. Phoolan Devi picture is now available in Amazon prime video.