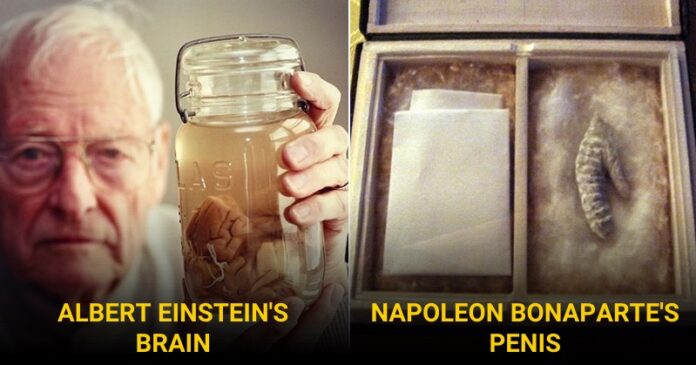 Humans have preserved themselves in all kinds throughout history such as mummies in Egypt. Similarly, over the years, the organs of many famous people have been preserved. Let’s check out those royal organs.

1. Galileo’s Fingers, Teeth, And Vertebrae Are On Display In A Museum

Renaissance astronomer Galileo Galilei’s middle finger and thumb are in the Museum of the History of Science in Florence, Italy. The museum also houses his vertebrae and teeth. These probably cracked off when his body was being shifted to another tomb.

In 1955, within few hours of Einstein’s death, pathologist Thomas Stoltz Harvey conducted his autopsy and removed his eyes and brain. He then dissected Einstein’s brain in 240 pieces. He kept those segments in collodion, which is a plastic-like material. Among these pieces, a few of them are at the Mütter Museum in Philadelphia, and the rest of them are at Washington’s National Museum of Health and Medicine. His eyes are said to be in New York City.

An English surgeon conducted an autopsy on Napoleon and removed his penis. It appears that it has been passed on from generation to generation. From an Italian priest in the 19th Century to a London bookseller in the 20th, it keeps on passing. Lastly, we came to know that it was in the private collection of an American urologist, kept under his bed in a suitcase until his death in 2007. Then at the time of auction of the urologist’s belongings, it is said that Napoleon’s penis has been among the objects sold.

4. Thomas Edison’s Last Breath Is Preserved In A Test Tube

This takes it to whole another level. Reportedly, automobile magnate Henry Ford asked Charles, Thomas’s son to sit beside his father in his last moments. And gave him a test tube to hold in front of his father’s mouth to catch his last breath. However, Charles gave it to Thomas’s business partner, Ford. Now, it can be found in Henry Ford Museum in Dearborn, Michigan.

5. Pancho Villa’s Trigger Finger Is On Sale At A Pawn Shop

Pancho Villa was a rebel general who was assassinated in 1923. His car was ambushed and he was shot by a group of riflemen. And, some of the people claimed to be his finger is on sale at Dave’s Pawn Shop in Texas. But, the owner refuses to guarantee his authenticity.