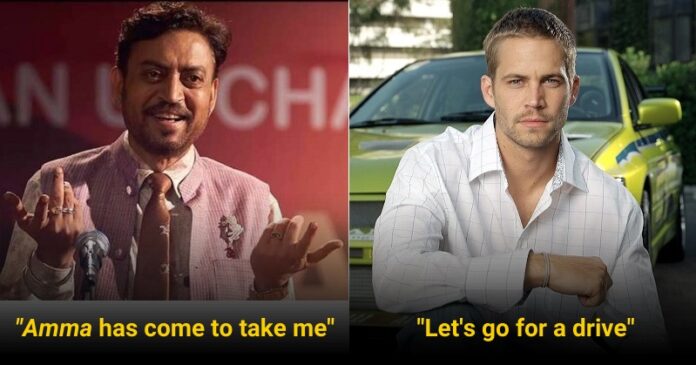 Last words can make quite an impact as we pack up from the stage of life. Some of the greatest minds ever left behind some gems before leaving this world in the form of their last words.

Here is the list of memorable and noteworthy last words of 16 famous personalities. Scroll down to check it out:

As Albert Einstein refused to undergo surgery, his last words were, “I want to go when I want. It is tasteless to prolong life artificially. I have done my share, it is time to go. I will do it elegantly.”

Irrfan Khan’s last words were to his wife about his mother, “Amma has come to take me.”

Dev Anand passed away from a cardiac arrest before leaving London. His last words were to his wife and he said, “I will return soon.”

Meena Kumari’s last words were to her husband before going into a coma. She said, “Chandan, I will not live longer now. My last wish is to die in your arms.”

His last words were to his sister. She asked him to be careful with his medication. He said to her, “Katie, Katie, I’m fine. I know what I’m doing.”

Elvis Presley’s last words were to his fiancée, Ginger Alden. He said, “I’m going to the bathroom to read.”

Paul Walker passed away in a car crash and before that, his last words were, “Let’s go for a drive.”

In the singer’s suicide note, his last words were, “It’s better to burn out than fade away.”

As per French firefighter, Princess Diana’s last words before she went into cardiac arrest were, “My God, what’s happened?”

Reportedly, his last words were, “I am fine, but if you call the doctor, I will have a heart attack.”

The legendary actor and singer’s last words were to his wife. He said, “I’m losing it.”