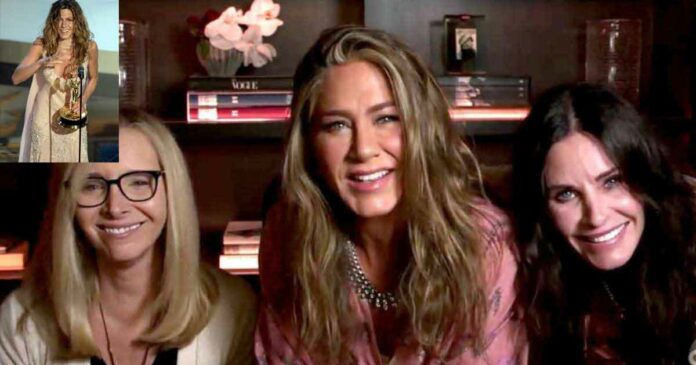 FRIENDS Fans were the most delighted on the occasion of The 72nd edition of the Emmy Awards. No one expected to see half the cast of Friends come together and play a small part as an extension of the series. Though just a role play but we loved to believe that all the three ladies from Friends(Jennifer Aniston, Courteney Cox, and Lisa Kudrow) are staying together since 1994. Yes, they admitted it themselves that Courteney and Lisa are staying with Jennifer probably after the show ended in 1994. Even Jimmy Kimmel was surprised to know the same. But anyway, you ought to watch the video if you don’t believe my words:

While the three FRIENDS are off for dinner let’s discuss some more proceedings from the show. You will be proud to know that Jennifer was nominated for Lead Actress in a Drama Series for her role in The Morning Show. But unfortunately, she lost it to fellow star Zendaya. But wait, Jennifer has received Emmy Awards already for her part in Friends as Rachel Green. We will discuss that soon, so keep reading.

More important is to know that Jennifer had some really tough tasks to do at the Emmy Awards recently as she was the one who helped Jimmy Kimmel host the opening of the ceremony. But soon after she realized that the Emmy Awards were to be received at home, she had to rush back to her home hoping to receive one for herself. And that’s not all, she also saved everyone from a disaster!

Yes, Jennifer Aniston saved the show from getting eaten up by a fire. She bravely used a fire extinguisher to stop the unexpected fire that started while they were live on the show. She was fast to react and very fierce at her actions, while Jimmy was the one who is to be blamed for the fire. Watch the video here to see how Jennifer Aniston bravely saved the day:

Ok, now coming back to our subject i.e. How Many Emmy Awards Has Friends won to date. We will make a list of the same but how many do you guess? If it was up to you how many Emmy Awards would you give the show?

I guess I would have emptied all the trophies to Friends. None other than Friends would have rocked the night and would have taken every single trophy available if I was on the chair to decide. But unfortunately, that’s never going to happen so let’s get back to reality.

In 2002, FRIENDS received an award for “Outstanding Comedy Series” and the fourth Emmy Award received in the same year was by Jennifer Aniston who received it for Outstanding Lead Actress in a Comedy Series for the episode “The One Where Rachel Has a Baby Part 1 & 2”.

All the information has been sourced from Wikipedia so you can trust it. Also, feel free to visit the Wikipedia page for more details on the subject.