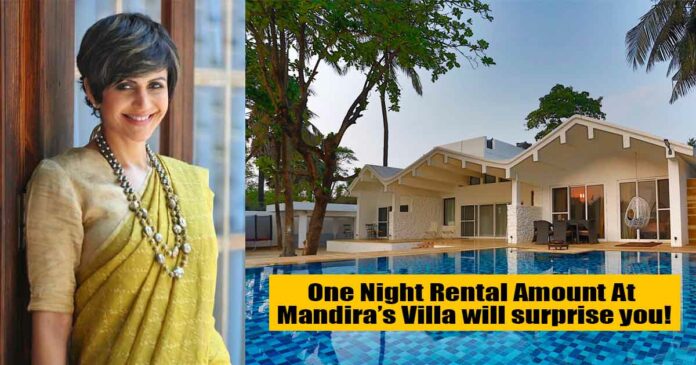 Bollywood actor and fitness enthusiast Mandira Bedi has donned several hats as an entertainer, such as lead actor, a host for the ICC Cricket World Cup, various other shows.

Recently, she turned Airbnb host and decided to redecorate her Mumbai holiday home that was once used as a set location, actress, designer, and television presenter and put it up on Airbnb. She has put up her Madh Island home to rent.

Mandira explained, “Every production team that came in added their own elements to it and painted over right before they left.” She continued, “Over the last few months, I have put my blood, sweat, and tears into the home and rehauled it entirely: right from the paint on the walls to the filtration system in the swimming pool.”

Recently, Airbnb India also announced that by renting her holiday home in Madh Island, Mumbai, Mandira Bedi has turned into their host. The actor posed against the backdrop of her beautiful villa for a photo.

Airbnb shared that photo on its official Twitter handle and said, “I am amazed to hear about women who are working hard, challenging norms, and gaining financial independence to become successful entrepreneurs supporting themselves and their families. Their journeys have inspired me profoundly.”

“I am amazed to hear about women who are working hard, challenging norms and gaining financial independence to become successful entrepreneurs supporting themselves and their families. Their journeys have inspired me profoundly.” @mandybedi, Actor & Airbnb Host #IWD2021 pic.twitter.com/Hy7cu4WCCy

Mandira also informed her fans and followers through her Instagram handle that she is going to be a part of a virtual event for Airbnb. She shared her picture in an orange dress and a white pair of stilettos at the home and captioned, “All set to rock and roll for a virtual event for one of my favorite brands: @airbnb ❤️🧡 Wearing the #airbnb orange 💥.”

It is a four-bedroom house with five bathrooms and a pool, according to a report by The Free Press Journal. Mandira is seen standing on the porch of her house in the pictures shared by a media person.

To let in the fresh air, french windows are designed in the rooms. The rooms see a color pop as teal-colored couches decorate the room. Mandira Bedi has put in a lot of effort in redesigning this sea-facing villa.

Mandira said, “The one thing that has stayed constant in this 14-year-old purchase, are the bougainvilleas all over the property, which also give the home its name. I’d like to believe that the first thing that would strike people when they enter the home is the rich use of color.” She continued, “The style of the home embodies my personality, and the mood and the tone of Bougainvilla are warm, friendly, and extremely welcoming.”

Take a look at the amazing house of Mandira Bedi:

The living room is breezy, peppered by pink and blue hues through cushions, and accented by neutral tones. There is an isolated workstation with a study table and a library and a daybed in the corner to recline on.

It also has a 6-seater table for guests to gather at. A team of two interior designers, Chaitali Kandalkar and Avni Undevia played a huge role in redecorating the house with technical details.

The Overall Layout Of the Home

The house has two master bedrooms, that is, one on the first floor and another one on the ground floor. The master bedroom downstairs has a beautiful four-poster bed and a gold-and-purple color scheme.

Mandira said, “One of my favorite elements of the home is the four-poster beds we have in two of the bedrooms.” She continued, “Living in Mumbai, it never crossed my mind to include four-poster beds as a part of the decor, but Bougainvilla’s high ceilings made it possible to experiment with this vintage furniture style.” She also added that the bathroom attached to that room is her favorite.

The second bedroom on the ground floor faces the sea and has an apt ocean blue color scheme. The third bedroom is shaded in orange and rust. Mandira shares, “Some of the art I created during the lockdown is placed on the walls in this room.”

The fourth bedroom is what she considers the second master bedroom. The color scheme of the room is green with a green leather sofa and a four-poster bed.

She says, “Some of the art which previously hung in my home in Mumbai now hangs on the walls of this room. The bedroom also opens into the largest bathroom in the house, which is grey in color.” She further added, “I have used yellow Jaisalmer stone on the flooring and the exteriors through most of the house. There are also several other personal touches through the home.” She continued, “Whether it is glittery, sheer curtains made from Banarasi sarees from my own business or the photos in the hallway.”

You can tell Mandira is a conscious traveler by the looks of her vacation photographs on Instagram. She said, “One of the things I was careful about while designing the home was to upcycle as much as possible.” She further added, “For example, we have a teakwood cupboard my husband and I had made together for our first home about two decades ago. I had it polished and redone to keep at Bougainvilla, and now it serves as a sideboard at the poolside.”

There is also a trampoline for the kids on the lawn. Earlier, the house had sleeper wood for the flooring. However, it was ruined by the relentless monsoons. Now, it is replaced with beautiful mustard-shade Jaisalmer stone. There are also a few accessories from Ikea and Good Earth that she purchased over the years.

A Shelter Of Peace

Madh island can be reclusive. That is why Mandira recommends you hang around at one of the numerous shacks or relax on the beach. She recommends, “If you are a film buff, I would definitely recommend you make a trip to the Madh Fort.” She continued, “While you may need permission to access this Air Force-controlled fort, it has spectacular views of the creek and has been the setting for numerous Bollywood movies and television shows over the years.”

She said, “For my fans who are reading this, I would like to say that Bougainvilla will show them that there is another aspect to my personality that they possibly have not seen before.” She further added, “The part that enjoys doing interiors and experimenting with art and colors.”