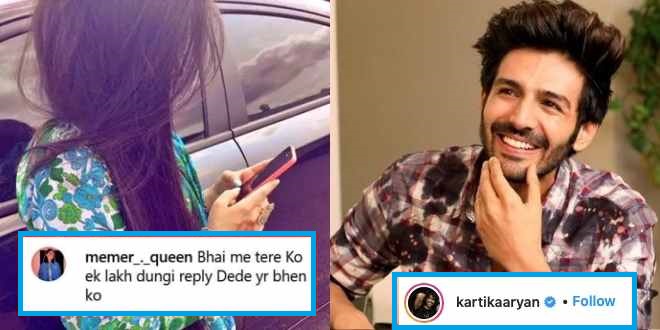 Bollywood actor Kartik Aaryan is one of the famous actors in Indian cinema who have a massive fan following across the nation. Kartik Aaryan is known for his sense of humor, besides his brilliant acting skills and his fun-loving attitude. This attitude is often reflected in the roles he plays in movies. Among fans, Kartik enjoys a massive female fan following on social media. He often has fun banter with them offline and online. Recently, he gave a quirky reply to a female fan who commented on his photo. And, what happened further was hilarious.

It all began when Kartik Aaryan posted a picture of himself on Instagram. He posted it with a caption that had a “Breaking Bad”, an American drama series reference. Giving the fans a good view of his left profile, he is looking towards his right in the photo. He can be seen wearing an olive green color T-shirt with a blue denim jacket. In the caption, he wrote a famous dialogue of Walter White about the meth business. The caption read,

“Jesse, you asked me if I was in the meth business or the money business… Neither. I’m in the empire business.”

Soon, his fans flooded the Instagram post with their comments. However, one comment really stood out which was commented by a female fan. She offered 1 lakh rupees to him to reply to her comment. The id of the person was “memer queen” and she also referred to Kartik Aaryan as a brother. She commented,

After reading this, Kartik decided to have some fun as well. He took the joke forward and gave a witty reply to her comment. He gave her the reply and asked her for the money which she offered. He replied,

His response triggered a flood of fans who offered him money in exchange for his replies and some even advised him to be a millionaire simply by responding to fans. While one fan wrote, “reply me I’ll give you chocolate”, another one wrote, “ye Kartik ki dialogue delivery ki tarah imagine kro.” One Instagram user commented, “@kartikaaryan bhai ye 25 din me paise double karane Bali ladki nikli.” However, one fan got overboard and offered him ten million rupees if he would marry her. She wrote, “wow so you’re replying to her imma give you 10 million to marry me.”

Similarly, more funny reactions from users triggered the whole scenario. Below are some of the hilarious comments of the users:

Kartik Aryan surprised everyone in the past by sharing chocolates with the media persons. He also taught Deepika Padukone the signature dance steps of the song ‘Dheeme Dheeme’ at the airport.

On the work front, Kartik is currently working on the Bhool Bhulaiyya sequel. He was last seen opposite Sara Ali Khan in Imtiaz Ali’s Love Aaj Kal 2. Bhool Bhulaiyya sequel also stars Tabu and Kiara Advani which is directed by Anees Bazmee. He also has Karan Johar’s Dostana 2 alongside Janhvi Kapoor.