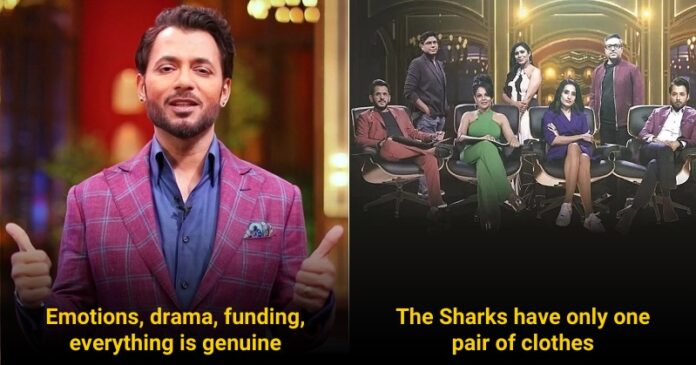 Shark Tank India has been praised for providing the country’s budding entrepreneurs a chance to show their ideas and make it big in the business world. Netizens loved this revolutionary concept that broke into the Indian reality TV space. That is why it is common to have a few misconceptions among audiences when the show is getting so popular. So, the founder and CEO of Shaadi.com, Anupam Mittal decided to bust a few myths surrounding the show with a LinkedIn post. If you don’t know, he is also one of the judges on the show.

1. The Show Is Scripted

When it comes to reality shows, the audience always thinks that it is scripted. But, shark Mittal busts this myth and says that the show is not scripted. Ironically, he said he was surprised to know that he would only get to hear pitches of the contestants at the moment they walked in. He also said that all the drama, emotions, and everything else is purely genuine.

2. Judges Do Not Invest Their Own Money

According to Mittal, this claim is in every way non-sense. The money the sharks invest is indeed their own. He also said that if the judges made investment decisions with someone else’s money, the high points and low points would not be as impactful as it is.

Claiming this is not true, Mittal says that audiences mistook the sharks’ passion for rudeness. He says that irrespective of whether contestants’ success arises out of the show or not, the sharks wanted every contestant to succeed. That is why if they witnessed someone make an impractical pitch, they tend to react strongly.

While talking about the stakes, Mittal says that the sharks would be investing not only their money but also their time and effort. That is why they took the decision that whatever investment decision they made, they have to be comfortable with it.

5. Judges Appear To Build Their Own Image

Busting this myth, shark Mittal says that the bigger aim of the show was to democratize and expand entrepreneurship in the country. Even though it would surely help the sharks get more exposure for their brands, the main reason behind their appearance in the show is definitely not that.

6. They Overlook Companies That Deserves Investment

Since the sharks are seasoned businesspersons themselves, they are in a better position to decide whether a contestant was deserving of their investment or not. He says that whether the contestants got a deal from the sharks or not, they are benefitted immensely by being on Shark Tank India. He also mentioned that due to companies’ appearance on the show, some companies were able to generate more than a month of sales within a day.

7. The Show Is Different From US Version

As per Mittal, the show was tailored to fit Indian audiences and scenarios. Even though the format of the show is the same, the differences in culture necessitated a different form of the show. He also gave an example of the Indian game show Kaun Banega Crorepati. This famous game show is based on Who Wants to Be a Millionaire?

8. Judges Only Have A Single Outfit

When it comes to the sharks’ wardrobe, Mittal lets viewers in on a secret. They had requested the makers of the show to get them multiple copies of the same outfits. Even though the judges changed outfits several times, the makers ensured that the sharks wore similar kinds of looks every time. It is all done to keep up with the international versions of the show.

The “Shark Tank India” Is About To End Soon

The viewers will witness all 7 sharks together in the week as the show is set to end soon. Sony TV Official dropped a press conference video with 7 Sharks on their Instagram handle where all are seen answering some questions to Rannvijay Singha. Sony TV captioned the post, “As the season 1 of Shark Tank India reaches its final leg, catch 7 Sharks live as they talk about their experiences, impact the show has created in the premiere season itself, how it has empowered many entrepreneurs across India & made the business a dinner table conversation and much more.”