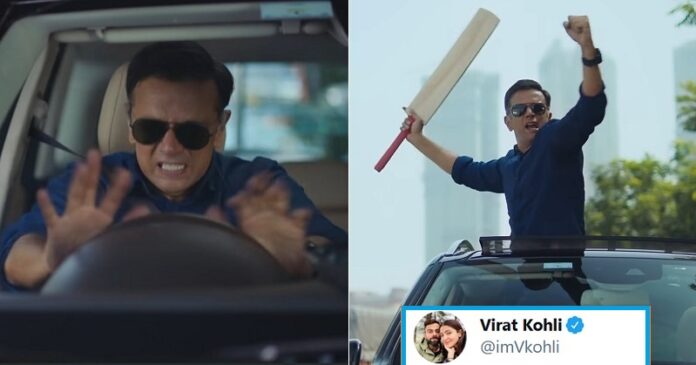 Whenever we talk about patience and calmness in cricket, Rahul Dravid is the first person who comes in our mind. Even in a five-day test cricket match, he always kept himself calm and stable. He always showed that he is the true example of a “gentleman of the game should be”. There are only a few incidents where is lost his control, apart from that he is a down-to-earth person.

But recently, we all came across a new video that has shaken our belief system on Rahul Dravid. We are pinching our hands to check if it is actually real. Even Virat Kohli who is known for his hot-headedness is left speechless.

It is a video that is advertising a credit card payment application. In this video, Dravid is stuck in heavy traffic and can be seen having anger-management issues. However, the most noticeable part comes when he throws a cup of coffee at the window of an old lady’s car and challenged a stranger by saying, “Come Man”.

He slides out of his sunroof of the car and yells, “Indiranagar ka gunda hun main”. He smashes the outside rear-view mirrors of the adjacent car with a cricket bat and laughs maniacally. He also tries to smash the steering wheel of his own car.

Never seen this side of Rahul bhai 🤯🤣 pic.twitter.com/4W93p0Gk7m

However, Dravid fans have enjoyed it as much as Virat Kohli. Here are some of their reactions:

Seen him angry just once in my life that’s throwing his hat after Rajasthan Royals loosing against Mumbai in 14.4 overs…
But this is different 😂❤️ pic.twitter.com/BQchRSYZPR

Me after seeing this side of Rahul Dravid Sir😌 pic.twitter.com/gorm76Zick

Everyday on silk board junction pic.twitter.com/NwFFohT550

Rahul Dravid has always been associated with funny advertisements. He used to be the brand ambassador of numerous brands when he used to play for the Indian cricket team. Most of the advertisements featured his cool and composed demeanor. Here are some of his advertisements: