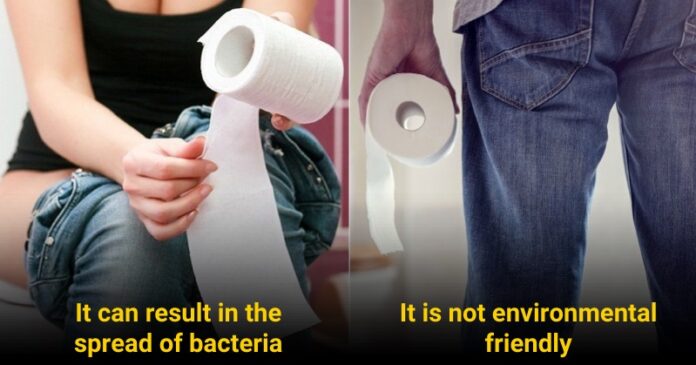 In different countries, people use different alternative methods to toilet paper. For example, in countries like India, Thailand, Indonesia, and the Philippines, bathrooms usually have a wide plastic dipper. There is even a special toilet with a cleansing seat that is used as a replacement for a bidet and is made in Japan.

Here are several reasons that why Asians don’t have toilet paper in their homes. Let’s check it out:

1. The Plumbing Is Not Made For Paper

Water management systems are not as good in many Asian countries as in the West. That is why flushing toilet paper is not recommended because of the sanitary problems it may cause. So, people there usually use bidet showers, bidets, or water bowls instead of paper. Also, pay attention to whether there is a bin or not, to make sure that you can flush paper in the toilet. The bin serves to collect the toilet paper, in many cases.

2. It Can Cause Irritation

For people who have hemorrhoids or fissures, toilet tissue that is too hard can irritate the area. To relieve pressure in the perianal area, using water instead of paper could be much more helpful and gentle.

3. It May Lead To Urinary Infections

Poor wiping habits with toilet paper can result in the spread of bacteria. In addition, wiping from the back to the front could increase the risk of transferring bacteria in women to the urethra. By using alternatives such as using a wet wipe or bidets, it’s possible to escape these issues.

4. It Has Cultural Meaning

Washing after all instances of defecation in Muslim countries is a part of Islamic toilet etiquette. And, the same rule is culturally knitted in India too.

As we all know, water is more hygienic than tissue paper. Wiping with toilet paper is not enough as it doesn’t remove fecal matter thoroughly.

According to expert analysis, 36.5 billion rolls of toilet paper are used every year in the USA only representing the pulping of some 15 million trees. This also requires huge amounts of packaging materials, energy, bleach, and water. As the experts believe, using other means like a bidet is much more environmentally-friendly.