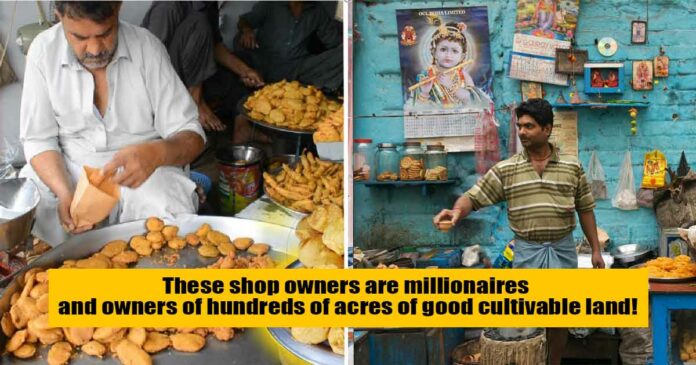 The news of very ordinary and poor people from Uttar Pradesh becoming millionaires often leaves people surprised. These people are none other than those who sell chaat, crispy-kachori, chai-samosa, and paan in the middle of the market or on the side of the road. These traders do not have any FSSAI certificate to assure food safety and security. And, they wrap up the goods on the arrival of the police and committee. However, the city of Kanpur is in the headlines this time for such matters. Not a few of them, but more than 250 such millionaires have come out in the open.

Even the small grocery store owners and chemists are millionaires on the list of such people. After the latest revelations, it can be assumed that even a person standing at the turn of your locality can be a millionaire who sells fruits. Recently, it has been found in the investigation of the Income Tax Department that even some fruit vendors have also been millionaires and owners of hundreds of acres of good cultivable land.

Crores Worth Property Near Scrap Dealer

You might have a car and during the coronavirus period, face a problem in paying EMI, but even the scrap dealers have been found to own three cars when it comes to these riches of Kanpur. Such rich people neither have any relation with GST nor pay a hefty tax in the name of Income Tax. Two scrap dealers bought three properties worth more than Rs 10 crore in two years. One in the Lalbangla area of the city and two in Bekonganj.

The Income Tax Department had been keeping an eye on these hidden “Dhannaseths”, who look like poor men on a daily basis. 256 sellers have come out as crorepatis in the investigation of the Income Tax Department and GST registration. The officials of the IT department were stunned when their details were probed with the help of technical tools and data software.

Game Of 400 Crores Of Property In Four Years

As per the reports published in Hindustan, outside the GST registration, these traders did not pay a single penny of tax. However, property worth more than Rs 375 crore was purchased in four years. These properties were bought in very expensive commercial areas such as Birhana Road, Hulaganj, Pirod, Aryanagar, Swaroop Nagar, and Gumti. Properties were also bought in KVP worth more than 30 crores, 650 bighas of agricultural land, and also in South Kanpur.

During the coronavirus period, the owners of two paan shops in Aryanagar, two in Birhana Road, and one in Swaroop Nagar have bought properties worth Rs 5 crore. A snack seller from Mall road is paying Rs.1.25 lakh every month as rent on different carts. On the other hand, the chaat sellers of Birhana Road, Mall Road, P Road invested a lot in the land, while two people of Swaroop Nagar, Hulaganj bought two buildings.

More than 65 small grocery store owners and chemists outside the GST registration have earned crores of rupees. While many people invested most of the property in the name of their relatives, some people resorted to small finance schemes and cooperative banks to hide this money from government eyes. However, these people made a huge mistake by putting their PAN numbers in government documents. All their secrets come out, as soon as PAN card and Aadhar were discovered in only one property.

Similar Case Of Tax Evasion Before

Earlier, such riches of western Uttar Pradesh were exposed in some cities. However, this might be the first case when so many people have been caught together. A very shocking case came to light in Aligarh in the year 2019. The team of the Commercial Tax Department had revealed the case of a small snack trader in the investigation who had an annual turnover of Rs. 60 lakhs.

Now we all can say that the world works in mysterious ways and is full of surprises. What we see is not always the truth.

The Registration For Shark Tank India Season 2 Has Begun! Here Is Everything You Need To Know